Pacific named storm crossing into the Atlantic basin? Likely will not keep the name, but could threaten the Gulf Coast in time. We explain.

Blog.WeatherFlow.com > Southeast & Gulf > Pacific named storm crossing into the Atlantic basin? Likely will not keep the name, but could threaten the Gulf Coast in time. We explain.

By WeatherFlow meteorologist Shea Gibson on Sunday May 31, 2020.

Here is the 3 day loop until present.

The rules have shifted over the years on this kind of “cross-over” event and here is the latest for the eastern north Pacific to the Atlantic basin (including Bay of Campeche/Gulf of Mexico.
If a TC (tropical cyclones = any tropical storm, hurricane, typhoon or supertyphoon) holds its name from the Atlantic basin to the Pacific basin or visa versa, then the name sticks. However, should the storm degenerate to a remnant low, then it technically is not a “cross-over storm” & will acquire new name in the basin where re-generation occurs.

So with that said, this system may not be over completely as the energy looks to hang around for several days along the southernmost portions of Mexico (Campeche, Tabasco and Vera Cruz).  As of the 1:55PM update, the NHC Atlantic gives it a 40% chance next 48hrs and a 50% chance next 5 days.  Notice the verbiage pertaining to “a new tropical depression” since the old one dissipated. 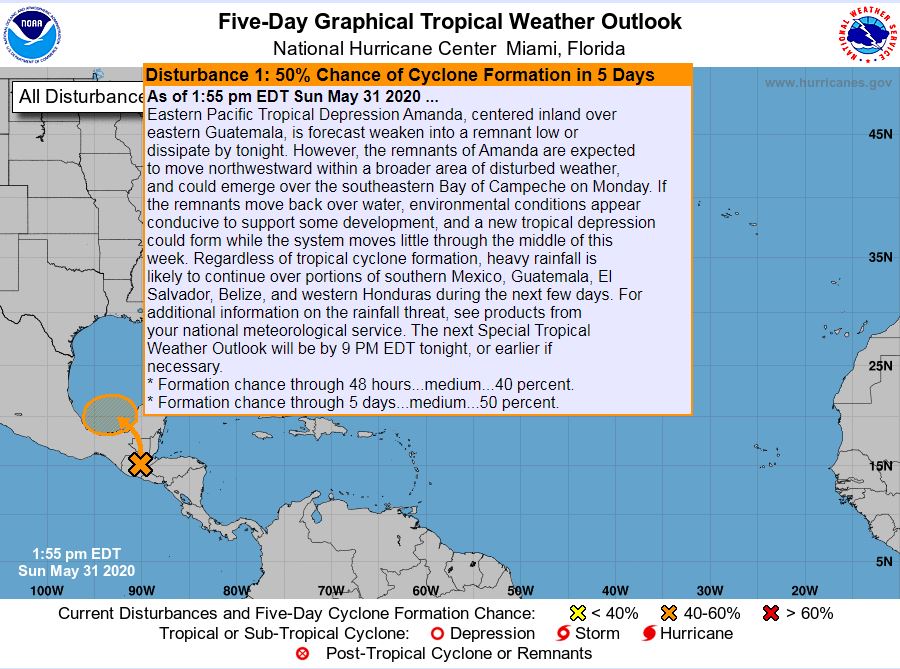 Should it regenerate to a named storm as it enters the BofC (Bay of Campeche), it would get the new name Cristobal, which is next in line for the Atlantic basin.  Models are trending it further north in time into the western Gulf of Mexico, but hard to say anything certain at this time.