In the summertime you’ll almost always see the forecasters at WeatherFlow mention in their forecasts the possibility for afternoon sea breeze development.  At first glance, the sea breeze appears to be a simple phenomenon, but forecasting the strength and overall evolution of a sea breeze is quite complex.  There are actually several specific geophysical parameters that directly influence sea breeze evolution. The two most influential parameters are the differential heating between the land and water and the synoptic scale wind regime (the overall wind field and whether it is offshore, onshore, or parallel shore). 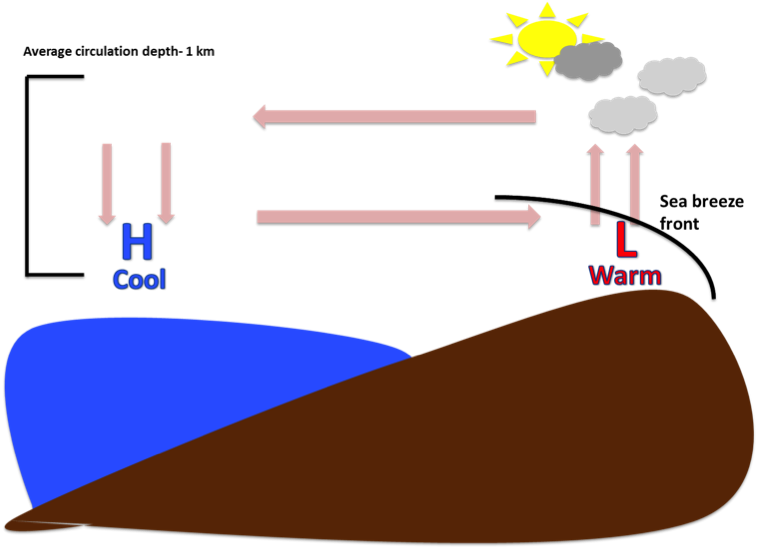 Figure was created by Nick Luchetti

For those who need a quick refresher, the sea breeze is a small scale wind circulation brought about by differential heating between the land and the water. On a hot summer day with little synoptic wind flow, the land heats up faster than the water. This creates a localized pressure gradient where low pressure develops inland and high pressure develops out over the water. Due to the pressure gradient force, wind always blows from high to low pressure. This creates a breeze that flows from the sea , hence “sea breeze”.  Ahead of the sea breeze a front can develop and if moisture and instability are present then storms can fire off this front. The average circulation depth is roughly 1 km, which gives you an idea of how localized and mesoscale this phenomenon is.

Where things get interesting is how the overall synoptic wind field regime influence this tiny, localized wind circulation. 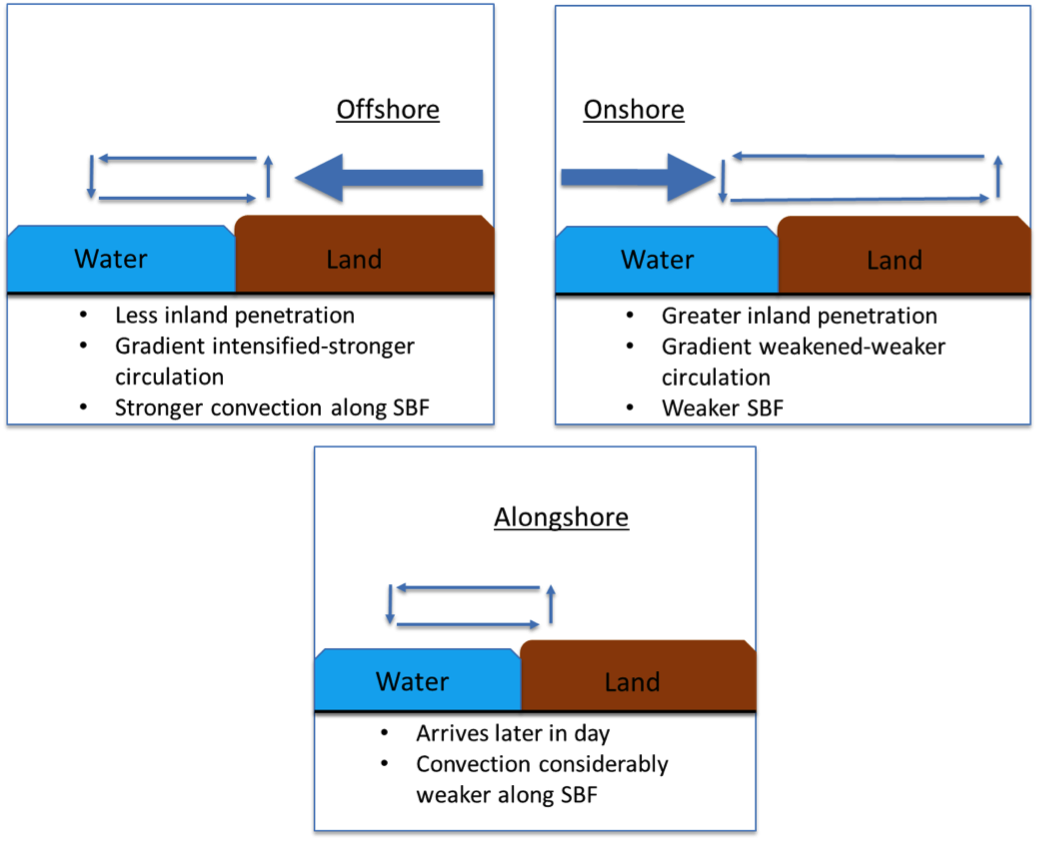 During onshore flow, the synoptic level winds flow with the sea breeze.  This allows for greater inland penetration. However, the cool ocean air filters in over the land, which in turn weakens the thermal gradient. This aids in a weakening of the sea breeze front.  It takes very light onshore winds to maintain sea breeze circulation. It has been observed that winds as light as 2-8 knots can fully suppress a sea breeze.

From a forecasting perspective, sea breeze evolution is quite difficult to discern. Models do not do a phenomenal job forecasting this phenomenon. However, understanding how the synoptic level wind flow regime influences the strength and evolution of sea breezes is something forecasters can keep in mind to provide better accuracy in their forecasts.

From an observational standpoint, the sea breeze front can be visibly seen on radar reflectivity. You can see on the radar image above a very fine “thin line” that stretches from Wilmington, NC northeast towards Greenville, NC. This visible “thin line” is essentially a collection of insects and dust particles that have been ingested into the updraft along the sea breeze front. During a particular strong sea breeze event, observations have shown inland penetration as far as Raleigh, NC.

Forecasting sea breeze development, evolution, and strength continues to be an enigma for coastal forecasters. However, due to the re-curring nature of sea breezes, observational analysis is highly feasible. As observational and model development increases there is hope that more accurate sea breeze forecasts will be attainable in the future.