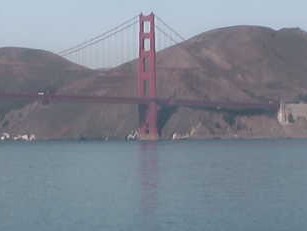 Central Valley thermal low over Bay so glassy AM and weak PM winds.

Check out the reflections at Pt. Diablo in my banner above and the reflection of the south tower of the Golden Gate this morning. It is rare to see such calm conditions even in fall.

It is even weirder since there are very strong NNW to NW ocean winds just west of the ocean buoys today. But only a hint of those winds will curve into the Bay this afternoon. So let’s take a look at the story behind these reflections.

In the first animation follow the time from 4AM to 5PM. Note how the North Pacific High’s wind are NNW in the AM. Winds from this direction have a much harder time curving into the Bay since they are parallel to the coast.

Notice in the PM that the ocean winds turn a bit more NW and actually become WNW over the Peninsula. These wind direction hit the coast at an angle and readily move into the Bay if there is a pressure gradient.

But also notice the AM wind coming from the Central Valley is N to NE to NNE. This wind direction tends to push the ocean wind away from shore and makes the PM winds later and weaker.

Equally important is that when we have NE flow the low pressure in the Central Valley often bulges out over the coast.

You can see this in the next animation.

Watch the time in the upper left and note the location of the isobars of the Central Valley thermal low.

The lowest pressure is in the Central Valley but from 2AM to mid day you can see that the isobars show a lobe of low pressure that extends over the coast almost to the Farallon Islands.

This means very weak AM wind since there is no pressure gradient over the Bay Area at the surface.

The image at the bottom of this page shows the overall pressure situation in the AM. 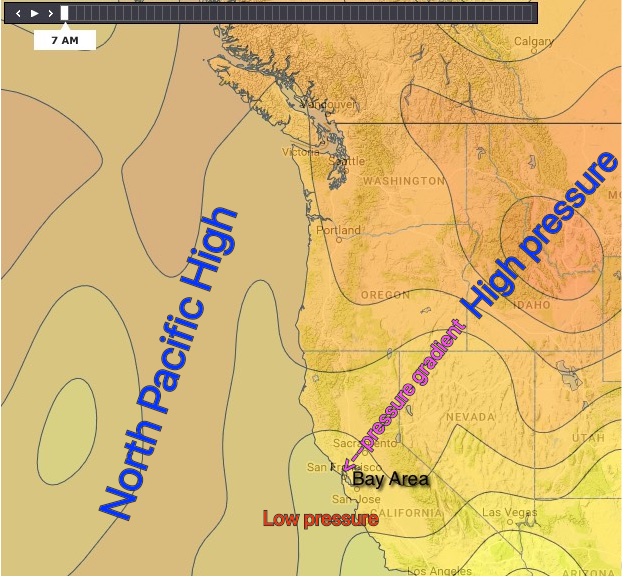 The weak NE flow aloft over  is due to a pressure gradient from a high pressure in the N. Great Basin. And with low pressure just west of the Bay Area in the AM we will have weak NE winds.

However since this is relatively warm air when it hits the coast range north of Sherman Island it tends to rise and most of the wind goes over the Bay Area. This NE flow helps to keep the low pressure over the ocean and also blocks the NW ocean wind.

In the PM the NE wind typically fades and as this happens the isobars of the Central Valley thermal low pull back to about mid bay. And this allows mild ocean wind to curve into sites like Waddell, Crissy, Coyote & 3rd that are on or near the coast.