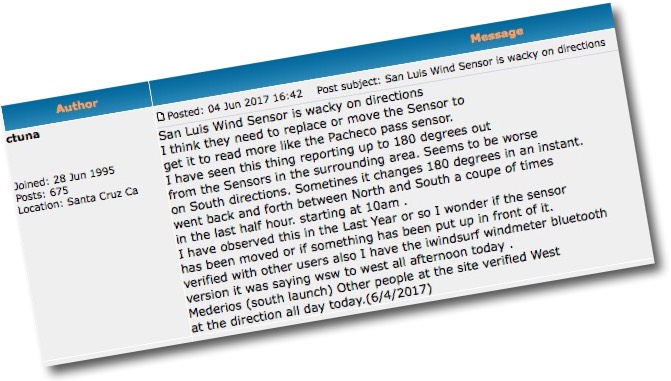 Maybe the sensor is not broken?

You are not the only one to notice the “wacky” San Luis readings. No we have not moved the sensor and there are no new structures near the sensor. But something has changed and that is the Bay Area wind patterns.

I know the wind patterns around San Luis very well since I was employed by GoogleX to do the forecasts for their Project Loon launches in that area:

So let me develop a hypothesis for you:

More and more frequently we are getting spring and summer northerly winds coming down the Central Valley. This change is related to increased # of

NPH ridges we keep mentioning in the forecasts as well as the Golden Gate Eddy.

So what does this have to do with wacky San Luis winds? Take a look at the animation below and watch the battle between northerly and more southerly wind over San Luis.

The second illustration makes it clearer. The details vary from day to day and with the relative strength of the N. and WSW wind but basically:

1. In the morning the marine layer is often deep in Pacheco Pass and WSW wind blows at the sensor. See GREEN arrows and GREEN diamond on wind graph below for Pacheco Pass.

You can see this by comparing all the archives from the surrounding sensors. But at our sensor so there is a battle between the N. & WSW winds. Hence the “wacky” readings (see ORANGE boxes)

3. If the northerly wind is fairly strong the sensor shows N. wind for a while.(ORANGE BOX)

4. Then in the early afternoon as the Central Valley pressure gradient goes up the WSW wind blows stronger at the sensor and the Northerly wind fades away. As this shift happens there may be a second period of “wacky” wind and the winds battle. Then the more southerly winds prevail. (2nd. green diamond.) 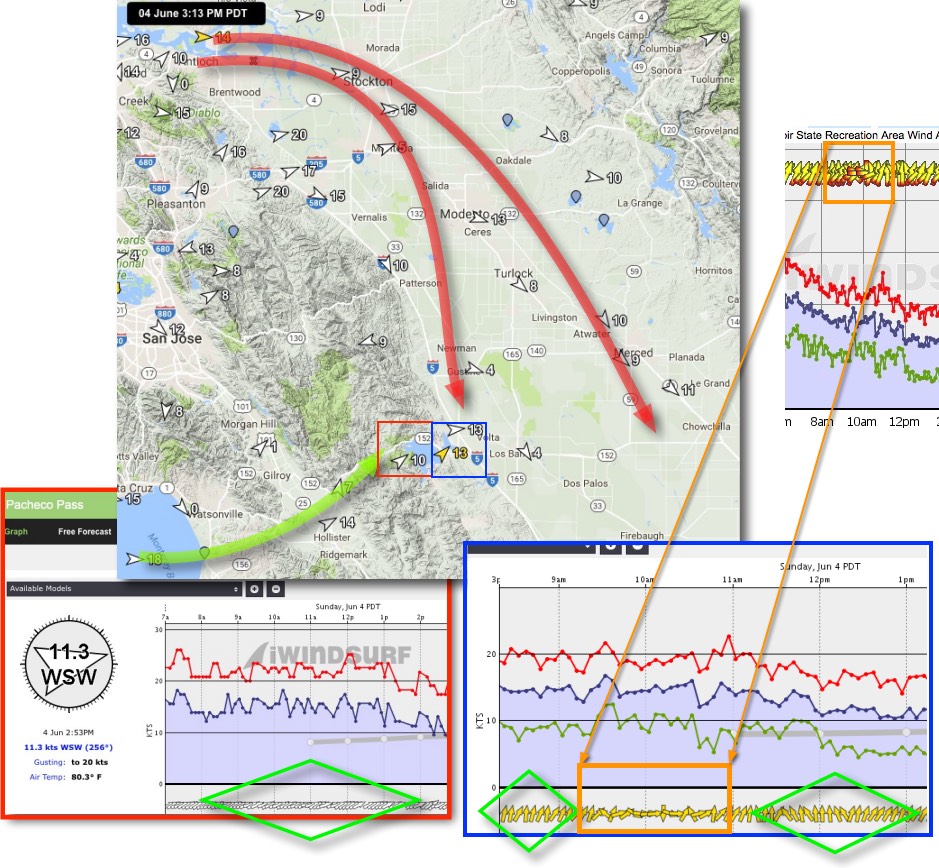 If you look at the San Luis archives for the month of May you will see the pattern of SW wind then N wind then SW wind punctuated with “wacky” readings very frequently. And on each of those days there was northerly wind in the Central Valley.

The reason you see different directions at different nearby sensors is the different frequency they update.

Our sensor updates more frequently than most of the other sensors so it shows more of the “wacky” changes.

Of course my hypothesis could be nonsense and actually it is a wacky osprey that lands on the wind vane each day to avoid the northerly winds and then takes off when the marine winds start.

Hopefully no one will ask why we are seeing more ridges, eddies and northerly wind!