3 Videos: Genesis and Death of the Golden Gate eddy

Where does the eddy come from?

If your favorite sites are north of the Bay Bridge the Golden Gate Eddy is your wind friend. While if you are a coast or Peninsula person you probably shudder when you see mention of the eddy in the forecast.

So where does the Golden Gate Eddy come from and why are we pretty good at forecasting the development of an eddy but pretty poor at forecasting when it will die each day and allow the winds south of the Bay Bridge to improve.

So let’s start with the big picture.

In the spring the North Pacific High’s location is often west of the Bay Area. Given the average shape of the NPH this means NW winds on the Bay Area coast.

These NW winds curve in to the as WNW to WSW winds at most sites so most of the bay has decent winds.

But every 2-3 weeks the North Pacific High, in response a passing upper trough, pushed an extension or ridge into the Pacific Northwest and even into Northern California. As this happens the isobars of the  North Pacific High pull away from the Bay Area coast and our ocean winds become more N to NNE rather than NW.

Looking at this first video notice that the North Pacific High is NOT west of the Bay Area but rather is pushing a ridge to our north. Notice how this has made our ocean winds NNE.

Now look carefully and you will see that these winds do not reach close to the Bay Area due to points north of us.

Now looking at the video zoom your eyes to the Bay Area. Notice how these NNE winds make a sharp loop as they enter the ocean waters west of the Golden Gate. 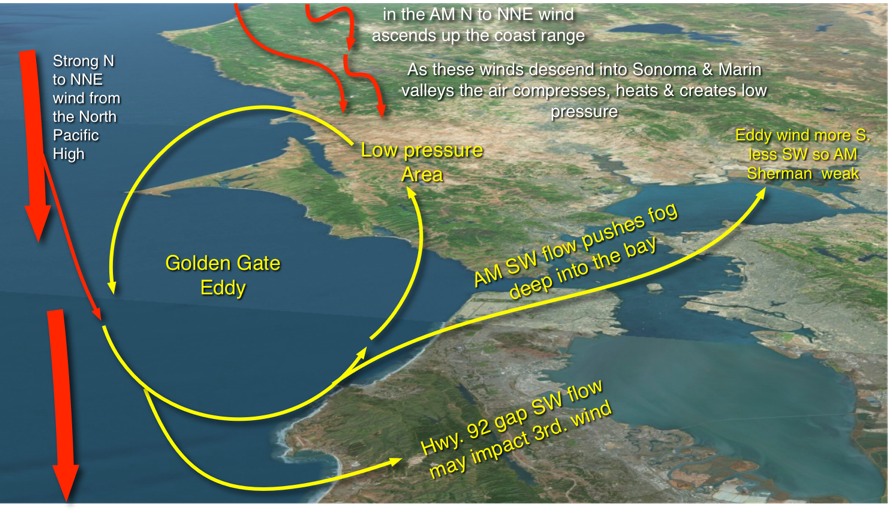 This sets the stage for the creating of your friend or foe the Golden Gate Eddy.

So now with the big picture in mind let’s see how the Golden Gate Eddy formed each morning the last week in this idealized graphic.

Despite the faint coast winds from Bodega to Waddell this week there were strong N to NNE winds west of the ocean buoys. Since the points north of the Bay Area extend out into the pacific some of this North ocean wind comes over the Mendocino and Sonoma parts of the coast range as you can see looking at the finer red arrows in the graphic.

As this wind descends into the coastal valleys of Sonoma and Marin it compresses. And as  you remember for your science courses compressed air heats up. And warmer air expands creating low pressure in the area.

So as a bit of the NNE ocean wind curves in towards the Golden Gate following the SFO-SAC pressure gradient it is diverted towards this low pressure in Marin and Sonoma. So part of it

heads into the bay through the Golden Gate and Hwy. 92 gap. While part of it heads towards the low pressure in Marin/Sonoma.

Once there it is forced southward by the Northerly wind and ends up forming an eddy.

This means we have southerly eddy winds along the coast and the wind heading into San Pablo Bay is more South that the typical SW. So part of  the wind that would normally make the Sherman Island AM winds is diverted into the Napa Valley which also has a low pressure area much like the Marin/Sonoma low pressure. Hence often weaker  Sherman Island AM wind in eddy conditions.

Let’s watch this happen today June 5. You are looking at the pressure isobars over the North Bay. Find the Golden Gate to get oriented. Now watch  low pressure area you saw in the graphic above form over Marin and Sonoma starting around 4AM. This is crucial in the formation of the Golden Gate eddy.

(If you sail the East Bay and Larkspur  you see a miniature version of this eddy many summer mornings in the Larkspur to Berkeley to Pt. Isabel triangle but it typically dies fast but does create weak southerly winds at those sites .)

Why does the Golden Gate Eddy Die?

Remember that the low pressure in Marin/Sonoma is created by the N-NNE winds from the ridge of the NPH. Typically that ridge retracts back towards the ocean late morning to mid day. As this happens the N-NNE wind goes more NNW to NW. At that point it is no longer coming over the coast range so the compressional warming subsides.

So the Marin/Sonoma low pressure fades away in the mid morning. This causes the death of the eddy but that is an extremely local

pressure change and the models barely see it which is why we seem so indecisive in forecasting the time the eddy dies.

So let’s put all of this together and see the eddy from a satellite perspective: Notice the counter-clockwise spinning pattern in the fog just west of the Golden Gate.

and then from a model forecast: The models are sometimes quite good at detecting the possible formation of a Golden Gate Eddy but NOT its location or its time of death.