A River Runs Through Us

Blog.WeatherFlow.com > California & Baja > A River Runs Through Us

We all know what a river looks like; a flow of liquid water encased by a bank of soil. Well there is another type of river that you need to know about this weekend if you live in Northern California.  You won’t find it near the ground but way up in the atmosphere.  Atmospheric rivers develop along boundaries between differing air masses or fronts and some can extend for thousands of miles.   These rivers help to distribute moisture around the globe and are essential to balance our water cycle.  The imagery below shows two atmospheric rivers in the Northern Pacific and another in the Southern Pacific.  Keep your eye on the one in the Eastern Pacific because it is aimed right at San Francisco and Northern California and looks to bring copious rainfall this weekend.

For those of us on the West coast we may have heard these rivers referred to as The Pineapple Express because they can tap into subtropical moisture from back in Hawaii.  That is a fetch of over 2,000 miles of moisture laden air aimed like a fire hose at Northern California. 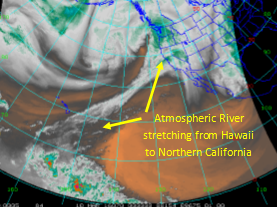 How much moisture are we looking at?   The Northern American forecast model output statistics showed over 2″ for San Francisco just in the 24 hours between Friday afternoon and Saturday.

But the rain won’t end after that.  In fact the National Weather Service is predicting a potential maxima of over 9″ in Northern California by Sunday afternoon..

So batten down the hatches, build an ark, chop wood or whatever you need to do to prepare because it looks like a potentially unwelcome river is flowing our way from Hawaii.