An inside look: Autopsy of a blown Southern California coast wind forecast.

I know it sometimes looks like we ignore occasions when we totally blow forecasts. But actually we are acutely aware of our errors and when the mistakes are really big we work together to figure out what happened. Normally this all happens behind  the scenes but I thought since my Southern California forecast last Sunday was especially bad I thought I would give you a glimpse of the gory details of a forecast  autopsy. And if you would like better forecasts take the time to mail me at the address above inserting an @ where it says AT. 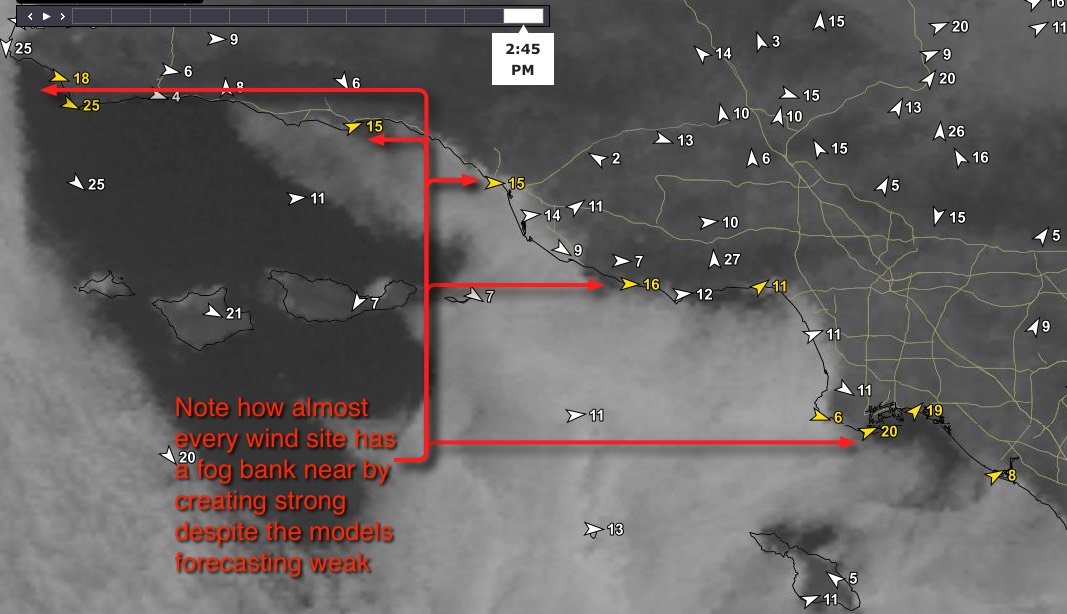 Yesterday was one of the worst Southern California forecasts I have ever done. The WRAMS, HRRR and NAM5 all had very light wind in the low teens with weak mid teens for Cabrillo and Leo where the wind normally funnels the strongest. The pressure gradients to the inland valleys was modest and the gradients to the Southern California deserts and Great Basin were weak.
There was a very strong inversion and the marine layer clouds were pressed to the topography of the hills in the AM. The NWS & models had some AM drizzle and forecast clouds lingering over the beaches in the afternoon. This is typically a wind killer. Yet many sites hit the upper teens or stronger. And sites like Ledbetter which rarely hit even mid teens during thermal winds neared 20 knots .

Local wisdom from customers says that when the clouds burn back leaving a fog bank just offshore very local wind will develop in the upper teens despite nothing at a larger scale suggesting this strong of wind. I have seen this same phenomenon at Crissy Field in the Bay Area when the fog bank sets up just right relative to blue sky closer to the beach.

Looking at almost every site with strong wind in this satellite image notice that the fog bank is just offshore of the sensor. The wind graphs show how the wind ramped up at each of these sites.
So I have 2 questions:
1. What do you think is causing this type of wind? I have my thoughts but I want yours.

2. Yesterday I forgot to add to the forecast my normal warning that there could be very local winds if the fog bank set up just right and for people to watch the cams and sensor for an early warning. But can you think of any way we could forecast this setup in advance?

Mike,
I am just running out the door and saw your backcast this morning and the graphs. One input from the boots on the ground…we had mixing at the surface and the fog lifted and we had stratus. As you approached the beaches the clouds were cresting the mountains and it looked like we would have fog at the beach but actually the visibility had increased but the clouds had lifted. This allowed for a fair amount of surface heating for the very near valleys. Thousand Oaks was in the 80s I think in the afternoon. We were cool through mid afternoon and then warmed quickly and stayed warm into the evening.

I had this similar pattern on a day I was forecasting, but to a somewhat lesser degree. I seems that the critical factors are: 1.) A strong, but fairly shallow inversion; 2.) A very mild onshore flow across the bight; 3.) Absence of an eddy.

I believe that when these factors combine, the well-formed marine layer slowly burns off but because of the strength of the inversion and with the mild onshore flow, the fog and low clouds are reinforced just offshore. As the low clouds clear across the interior, temperatures heat to roughly seasonal norms (though even below normal temperatures can be warm enough this time of year). And the extremely local sea breezes kick in solidly.

I think this is somewhat forecast-able, but I haven’t done so with any great success! The factors in play could easily change, especially the very mild onshore flow become just a bit stronger … then winds are weak.

Does that theory sound logical?

I would concur with your theory.  I think one of the critical factors seems to be that the inversion level is below 2,000feet and is strong.  When this occurs the marine boundary layer is smaller and the marine clouds do not mix out or lift over the Bight.  The fog clears to the coastline allowing for the local valleys and plains to heat, creating strong thermal gradients.  Yesterday was a day typical of this and so I kept the winds in the upper teens for C-Street to Cabrillo and was able to verify. Ledbetter also hit the mid teens.

Today is a little different.  The HRRR is doing a great job of picking up the Catalina Eddy though the center seems too far west based on observations. The Wrams has missed it all together since it did not develop until after the last forecast run.   Ventura northward has been clear of most of the marine clouds.  I initially forecast C-Street to be weaker than Cabrillo since the heating would extend over the water but now the eddy looks to be disrupting the winds for Cabrillo.  So probably not able to test the theory today.
Kerry
Ben & Kerry,

Ok, it sounds like you guys have the same reasoning I do. At present I think the best we can do is to be sure that anytime we see all these variables we go ahead and forecast upper teens but put in the caveat that the forecast winds hinge on local clearing to just beyond the coast and people should use the sensors, cams and satellite imagery to confirm the forecast.

Incidentally 3 of the most reliable wind magnets on the California coast are Waddell, Treasure Island  and Punta San Carlos, Baja Norte. And both have fog banks just nearby almost all of the marine layer season. The problem is that the Southern California equivalent is much rarer and tricky to forecast.
Mike
June 17, 2015in California & BajaBy Mike GodseyMore from Mike Godsey