May grey and June gloom has turned into more of the same, now that we have hit July .   The marine clouds that are a regular feature of Southern California’s weather in early summer are persisting into July.  Call it whatever you want it sure doesn’t feel like the middle of summer yet.  Thursday’s pattern was an unusual twist to the usual story of clouds moving inland overnight and then slowly clearing back to the shoreline.The satellite loop shows the marine clouds clearing from over the Bight while the marine clouds lifted and developed over the land.

With an upper level low pressure circulating overhead cold air from up above pushed toward the surface, breaking the usual inversion and allowing the marine clouds to clear.  Notice how few clouds are over the Bight at 3pm while inland over Santa Barbara and Ventura counties the fog was able to lift into a stratus deck that hung over the inland ranges.  As the sun broke out at the beaches the temperature warmed quickly to 73 degrees at Zuma Beach by 11am while inland under the clouds temperature were lagging behind. 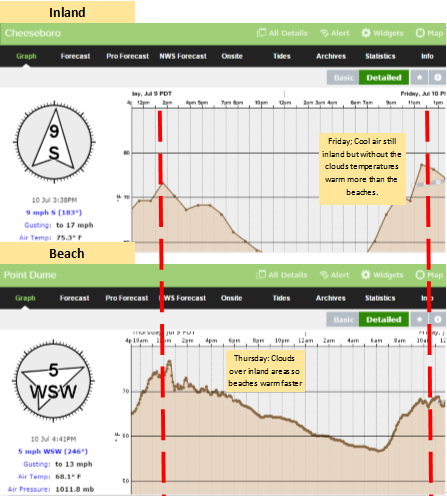 The cool inland air influenced the beach winds.  Sea breezes had a difficult time setting up without the warm inland air.  I stopped by Leo Carillo at 2pm to observe our sensor and while you can’t see the sensor well in this picture the flag above shows the offshore winds. 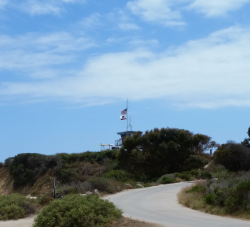 \The big question is when will we warm up.  The extended maps keep hinting of a building surface high pressure pushing back west but an upper level trough still lingers offshore. This summer it has been a feature that keeps returning which is unusual.  So though temperatures warm back to normal we don’t see any typical July heat in the near future.  Which is just fine by me as cooler temperatures mean lower evaporation rates during this major drought.  Stay tuned for an update on El Nino and how that may affect our fall.