Lots of the signs of a marine surge towards the weekend. 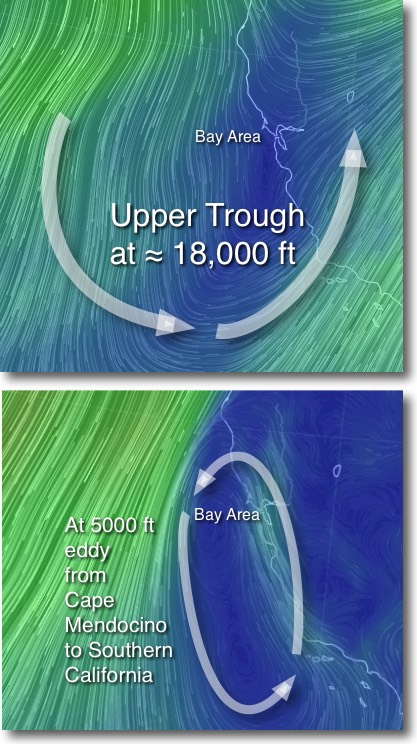 What could go wrong? In one word: Dolores.

It all looks so simple in the top animation. The winds are NW today and tomorrow and turn into a SW marine surge by Friday and Saturday. But the reality is far more complex and far more iffy. So let’s dig but a bit into the anatomy of this marine surge forecast.

Today, Monday July 13 we are in a NW wind regime as the North Pacific High returns to the Northern California coast. However looking towards the weekend I am seeing signs of a surge of marine air and SW flow for the Bay Area. At the same time there are signs that convection could disrupt this marine surge before it even matures.

Here is the story in pictures and I will fill in the text as the pattern resolves.

The next image shows an upper trough at the 500mb level which varies around 18,000 feet. This upper trough or southward extending loop in the upper level winds brings cooler air to Northern California and lifts the inversion allowing the marine layer clouds to deepen and move further into the Bay Area. It also brings SW flow far above the Bay Area. All of which helps a marine surge event. 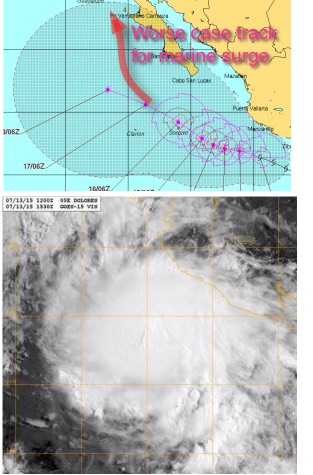 However there are also a chance of wind spoiling convection this weekend. Why? Check out the possible tracks of tropical storm Dolores off Baja. The models are pretty unclear which way she goes but if Dolores tracks to the north the storm will pump moisture into those SW winds you see streaming over California from the upper trough in the images above.

That would mean increasing high clouds, a weaker pressure gradient in the Central Valley and a disruption of the marine layer clouds which would cause my proposed marine surge to fizzle.

The next image looks at  the GFS model output at the 850mb level which averages at about 5000 feet. This model suggests that an elongated eddy forms just off the entire Central California and part of the Northern California coast. If realized this flow would really enhance the southerly winds of a marine surge.

Then the high moves to the NE as it pushes an extension or ridge into the Pacific Northwest. This ridge helps pump up the wind in the Gorge.

But as the week progresses notice how it causes the NW winds along the Bay Area coast to turn from NW to NNW to N and pull away from our coast.  Given the eddy at 5000 ft. the Central California coast this is a perfect set up for a marine surge as southerly winds develop along the coast south of the Bay Area. The next animation shows a close up of this happening.

Update Tuesday July 14. This next animation shows the winds at 5000 feet. Notice the blow off from tropical storm Dolores heading towards California. This marine surge is supported by low and mid level “eddies” that I think could entrain some of the moisture from Dolores and bring it over the Bay Area and nearby Central Valley which would dampen the marine surge Saturday.

I actually a pretty certain the marine surge will happen as forecast but it is risky forecasting a marine surge 5 days in advance so Dolores allows me to have plausible deniability if there is a forecast fiasco.