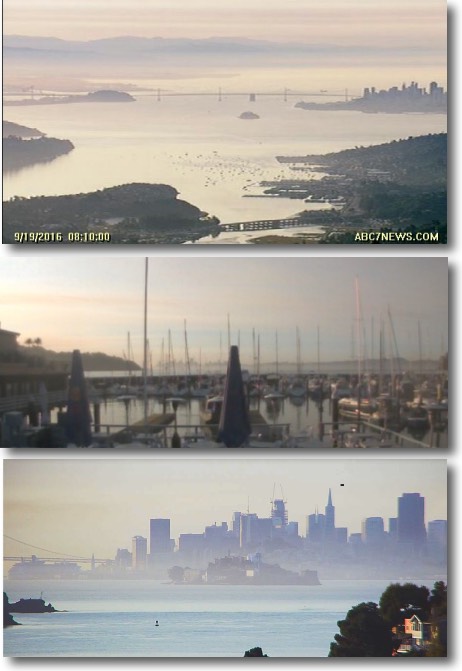 I took the banner photography above while flying in a Coast Guard helicopter during a September heat wave day several years ago. Notice the brownish tint to the skies above San Francisco.

In recent  days this September we  have see a this same pattern. And it is a pattern that has become even more common in recent decades. Morning finds a beautiful reddish sunrises that give way to skies with a slight brownish tinge and very weak winds for most of the Bay Area.

Then in the late afternoon a few sites see a fast ramp up of very localized upper teens winds mostly far from shore. And all the while there is nary a trace of our typical summer marine layer clouds.

This pattern should begin to fade this afternoon and be mostly over by tomorrow Sept. 20.

So what brings on these events?

The animation below of the western USA gives a part of the answer.

We are looking  at the wind patterns at about 10,000 feet. Notice the clockwise flow  over area and how the Bay Area is right on the edge of this flow today at 9AM Sept 19.

Yesterday this high pressure was completely over the west coast.

This upper high pressure zone is an area of descending warm air. And as it descends it compresses causing more surface heating.

So you would expect a heat wave to be impacting the areas below this high pressure zone.

The red color shows temps in the 90’s to over 100 degrees F. Notice how the Pacific Northwest is relatively cool. Looking the high pressure animation above you can see that this are is north of the high pressure hence it is cool.

This heat in turn produces a surface low pressure zone which can not expand upwards so it balloons outward.

Looking at the next image you can see the isobars of these low pressure zone. Especially note the Central Valley thermal low isobars.

In the afternoon those isobars west of the Bay Area contract to about the East Bay hills. This allows a weak pressure gradient to develop between the cool dense air over the Pacific and the edge of the thermal low over the East Bay  hills. In this situation we have very local thermal winds aka as local sea breezes.

Now what happened to the marine layer clouds that were so prevalent in the days before the heat wave?

From the hilltops you will notice that the top of the marine layer clouds look “harder” and they are thinner compared to preceding days as the inversion between the cool moist surface air and the hot dry air aloft becomes more marked. But as the heat wave matures the descending air crushes the marine layer clouds to the surface and the clouds are more confined to the coast. And once the heat wave matures the moisture in the clouds simply is not visible.

And the brownish skies? Natural and human made pollutants typically diffuse upward to the inversion and are blown inland by the afternoon winds. But during a heat wave all those pollutants are crushed closer to the surface giving the sky a brownish tinge. And with weak winds they tend to linger in the basin around the bay created by the coast range.

You can see what upper high pressure did to the marine layer clouds Sept 18 and 19 in the imagery at the bottom from the Bodega profiler. Note that time goes from right to left in this graph.

So why do we expect slightly cooler temps today and cooler yet tomorrow? And why are the winds forecast to improve Tuesday? Take a look at the animation of the high pressure above and remember that weather systems on the average move from west to east.