Major wintery storm off the coast. 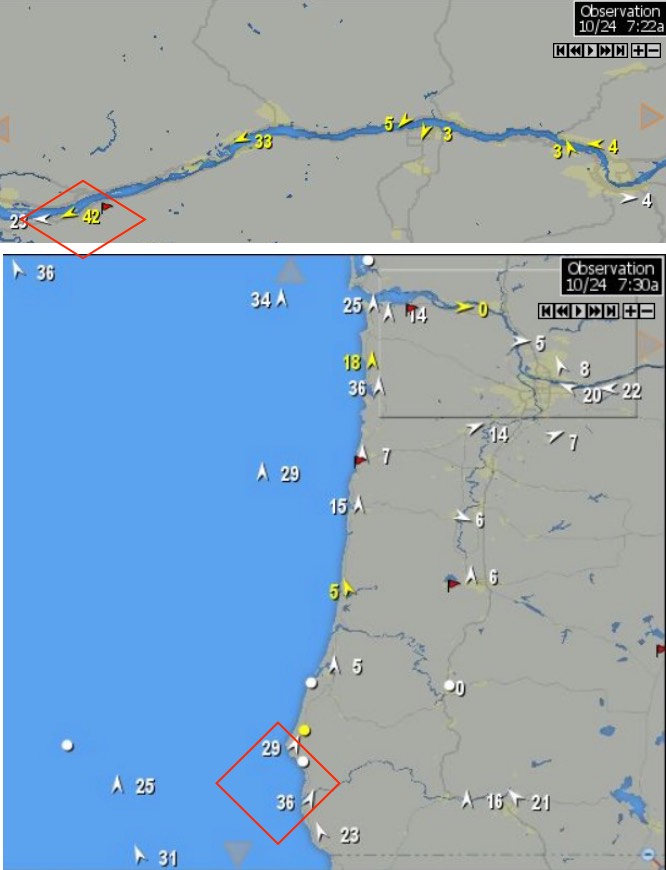 There are a number of causes of east winds in the Gorge.

The most common cause in early fall is the departure of the North Pacific High from our waters and high pressure developing in the Great Basin  and Columbia Basin. This means a pressure gradient from east to west. This is never a huge pressure gradient so the winds in most of the Gorge are very weak. But all that easterly wind has only one pathway to the  lower pressure over the ocean. And that is the narrow gap in the Cascades in the Stevenson to Rooster Rock area. So while the Hatch and Swell may see only a few knots of east wind Stevenson and Rooster may be ripping in the 30’s.

But in late fall there can be another cause of east winds in the Stevenson to Rooster Rock area and this cause is always associated with strong southerly winds on the coast.

pressure storm system off the coast of the Pacific Northwest. So all the air in the Columbia Basin begins to move towards that low pressure. And once again the Stevenson to Rooster Rock area acts as an venturi so the winds accelerates in that area. Then once past this narrow gap in the Cascades the winds diverge and weaken. Meanwhile the coast is being battered by strong southerly storm winds.

Also notice how much weaker the wind is just a few miles away from the coast and in the lee of points along the coast. Once again topography plays a role. These storm winds are unstable air and when unstable air hits hills, points and ridges it rises and is slow to return to the surface making for weaker surface wind.