Forecast becomes iffy with a possible 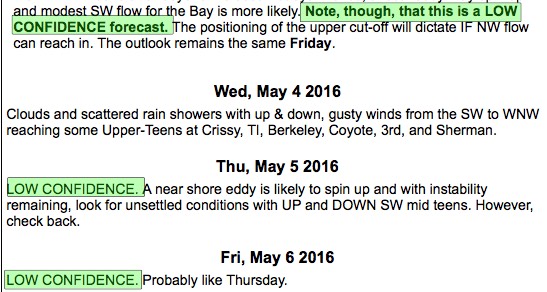 Cut-Off Low in the picture.

Take a look at the extended forecast to the right for rest of the week in the first image!

Doesn’t it drive you crazy when forecasters use all those weasel words? Why can’t forecasters be decisive and forecast the future with absolute certainty like Donald Trump! 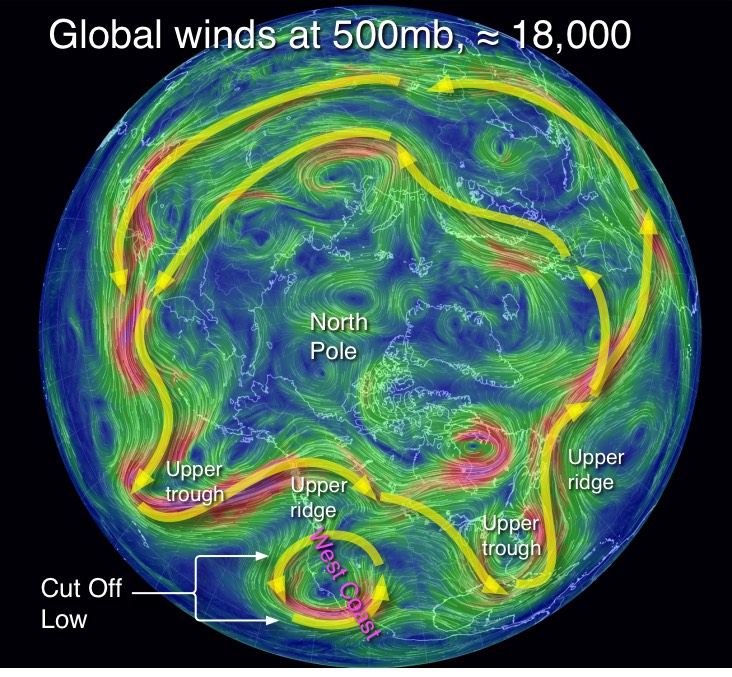 The reason is that in meteorology, like politics, reality is complex and sometimes it is wiser to forego appealing to the customer and defer to the uncertainty of reality.

Notice how these winds flow from west to east around the world and how they are strongest in a narrow ribbon winding sinuously far aloft.

In meteorology these winds are said to be at the 500mb level which varies in height around the world but averages around ≈ 18,000 ft.

Next note that the these winds sometimes form loops that curve northward. These N. loops are called ridges and they are areas of warmer air,  a thicker atmosphere and higher pressure.

Also note the loops of wind that extend southward. These are known as upper troughs and are areas of cooler air, a shallower atmosphere and lower pressure.

So why should you care about these winds at ≈ 18,000 ft.? Obviously if you are climbing Mt. Everest or even Mt. Rainer you would care a lot since you may be exposed to these powerful winds. But the rest of us rarely ever feel these winds except when a plane flight takes longer or shorter than expected.

The reason these winds are important is that the west to east movement of these upper ridges and upper troughs is critical for forecasting weather and wind.

For the west coast these upper troughs and ridges steer winter storms. And in the spring and summer they steer the low pressure systems that bump the North Pacific High towards or away from the coast in the spring.

This upper troughs and ridges also determine the depth of the marine layer that is so critical for summer time west coast winds. And they are critical in our periodic heatwaves.

So much of forecasting is watching the location, movement and shape of these upper troughs and ridges. By following their movement via models and satellite imagery we can forecast the surface wind and marine layer depth in several days in advance with some accuracy.

Now look again at the image of the globe. Find the west coast labeled in magenta. Notice

the counter-clockwise spinning winds over the west coast this coming Friday. Then check out the animation to the left.

This critter is called a Cut-Off Low or Closed Low. Note how this Cut-Off Low is
disconnected from the upper level winds going around the globe. This means that the Cut-Off Low does not flow predictably from West to East.

Instead a Cut-Off Low wobbles about in an unpredictable fashion until finally another upper trough comes by and sucks up the Cut-Off Low.

So where do Cut-Off Lows come from? The next series of images tell the picture.

By Wednesday the upper trough is has become narrower.

Finally in the Friday image the upper trough has pinched off a counter-clockwise spinning Cut-Off Low that is disconnected from global winds at ≈ 18,000 ft.

In this position over Southern California the Cut-Off Low becomes unpredictable as does the weather and wind.

In fact the entire process you see in these last 4 images is very iffy since even as the Cut-Off Low forms it is less impacted by the normal and predictable flow of the upper level winds. Hence our very un-Turmp like forecast!