Degrees of Wind Direction along South Carolina: Onshore vs. Offshore

As we get into the cooler months of fall and winter, we start to see more NE events unfold along the SE Region as colder High pressures to the north wedge down behind cold fronts that push through. For NE winds, as a cardinal direction we use in forecasting, we see variances in NNE <–> ENE which have a significant impact on SE’erly facing beaches along the South Carolina Coast.  This can also be said for the directions of SW<–>W in some instances.  For the many water sports enthusiasts who use shorelines as a safety net, it is important to know if a wind field is offshore or onshore – or more specifically side-on, side-side or side-off for many intents and purposes. For this we can use what is called a “Wind Rose”, which is derived from compass readings and can use azimuths  (degrees of direction).  As in a circle with 360°, wind directions can be gauged on these “azimuths” to find out exact degrees of flow. 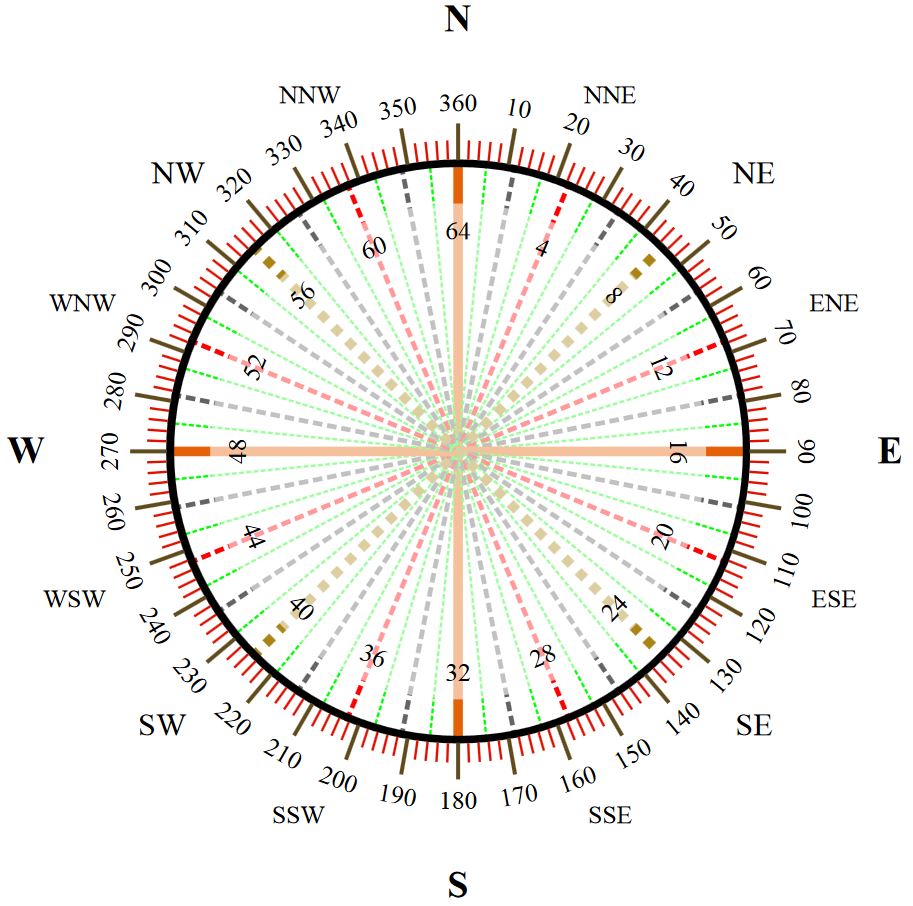 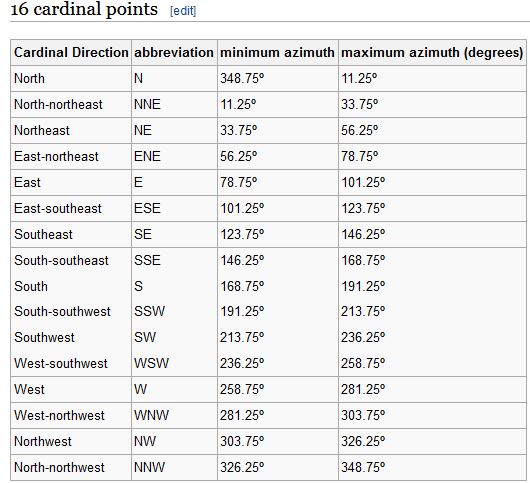 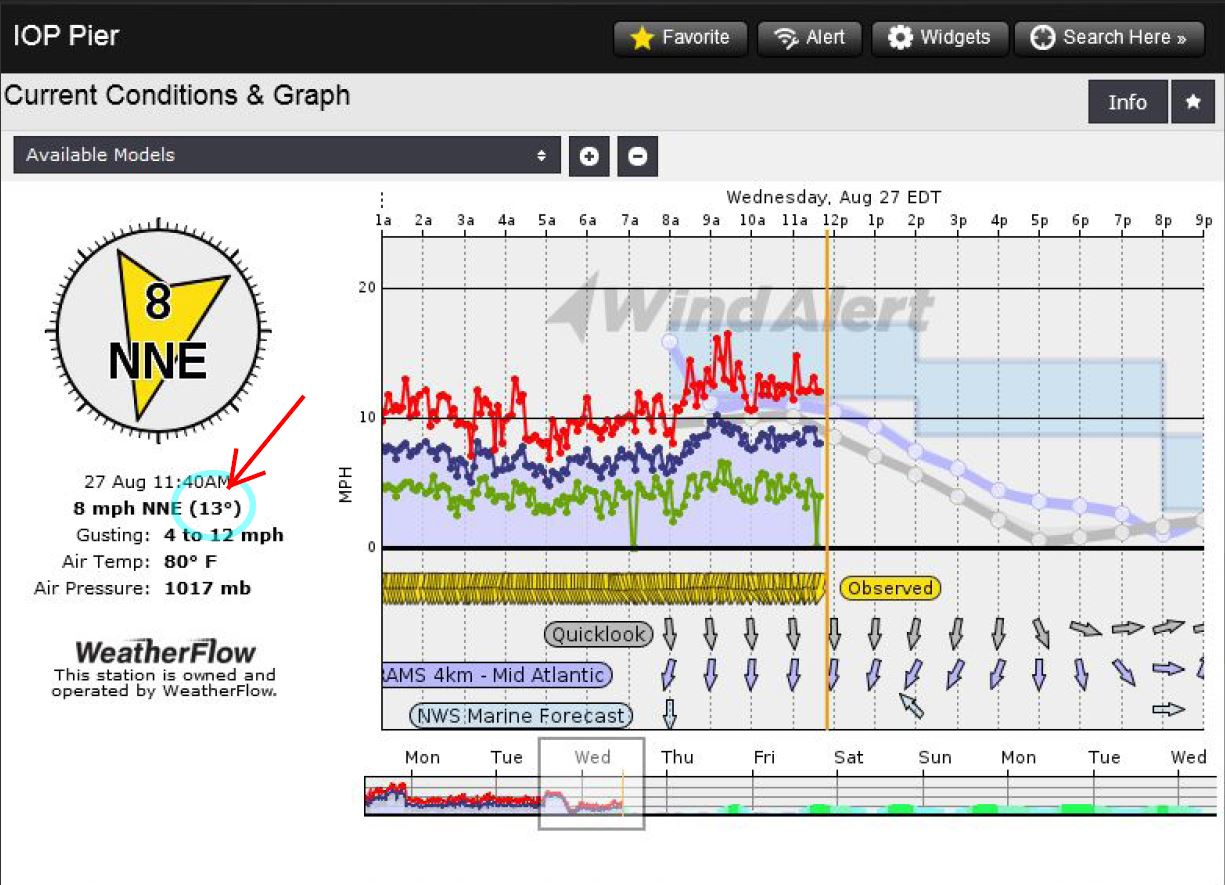 Some of the Wind Roses have a proper sailing term of “b” in the verbiage, which means “by”…so for example if you see NEbE – that means NorthEast by East – or just a hair below NE leaning towards ENE.  Many European mariners use a 32 point “Mariner’s Compass” for exactness in their navigational purposes– and some even still use the “Principal Winds” to go with them http://en.wikipedia.org/wiki/Classical_compass_winds ; however, meteorologists tend to stick with the main 16 in the above two pictures. Here are a couple of examples of a Mariner’s Compass: 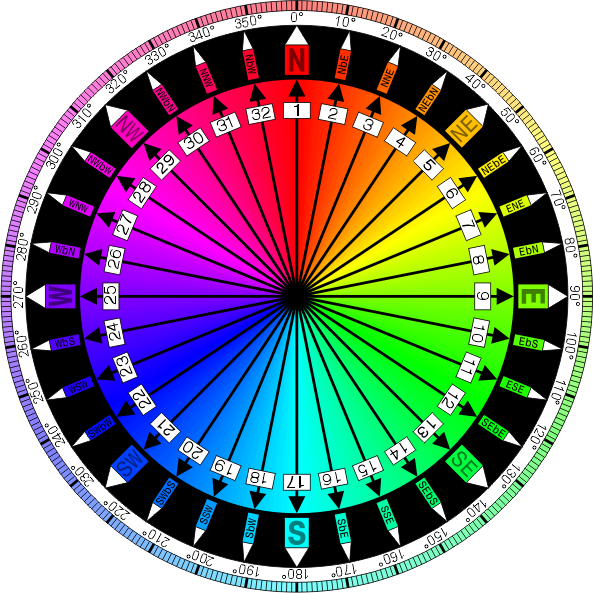 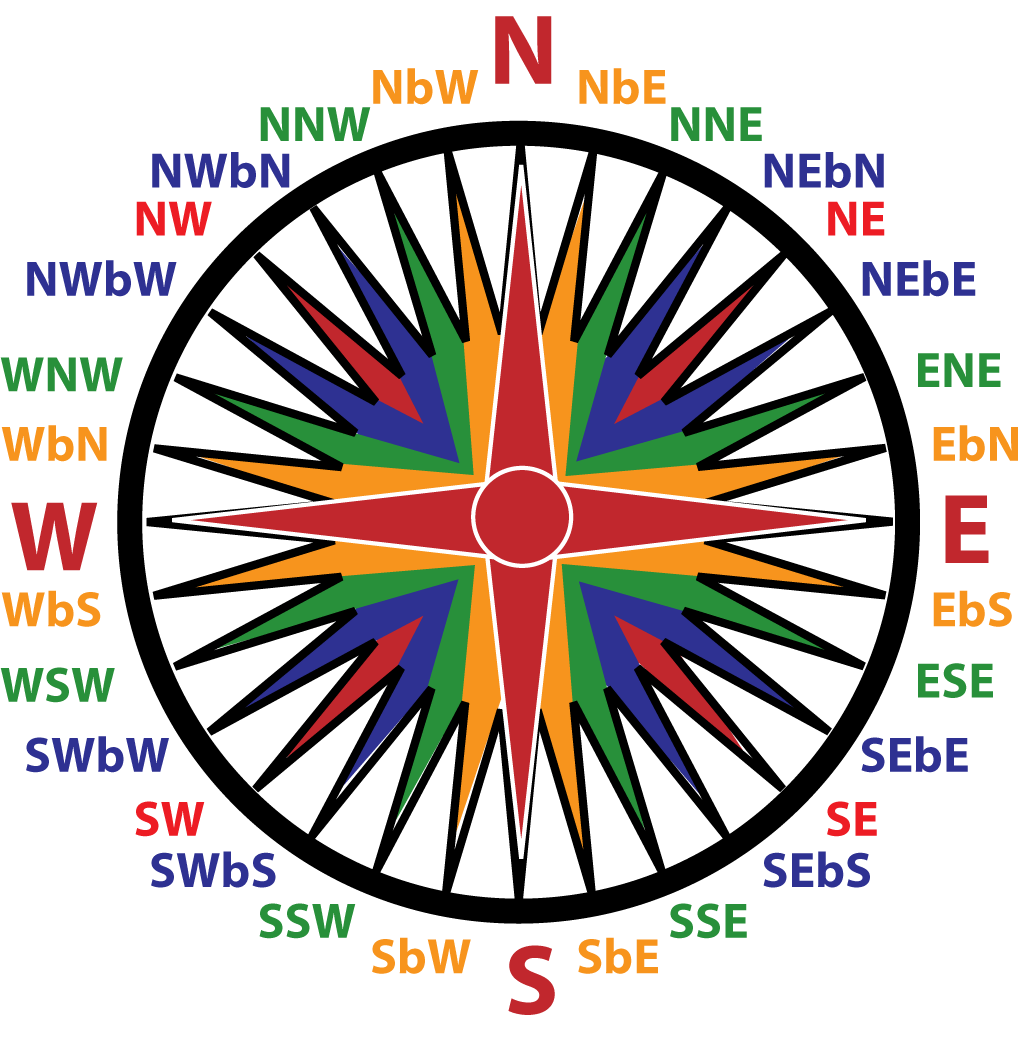 Along the Charleston coast during NE winds, the outer barrier island beaches that face southeasterly directions (such as Isle of Palms, Sullivan’s Island and Folly Beach) currently appear to need at least a ~65° ENE angle of wind in order to become at least side-side to side-on direction for most locales given the most recent angles of the beaches themselves… with perhaps northeastern IOP needing a slightly higher degree of angle to 70°+.  Otherwise, winds become land shadowed and sensors are not able to get true readings. Around the northern “drumstick” tips of these islands, we see that lesser degrees of angle are needed to become onshore and possibly even NNW/NW to some locales, but the further out one goes the greater chance for being pulled out to sea by heavier winds in the event of something going wrong – especially on an outgoing tide.  The tide definitely should be considered as surface winds coupled with surface currents can make for a deadly combination on the outgoing tides.   Rip currents along beaches and along rounded tips where eddying occurs can also be enhanced by both coupled and oppositional currents.  Conversely, on the opposite end of the spectrum, we’re looking at Westerlies going offshore after passing the ~240°-245° mark. 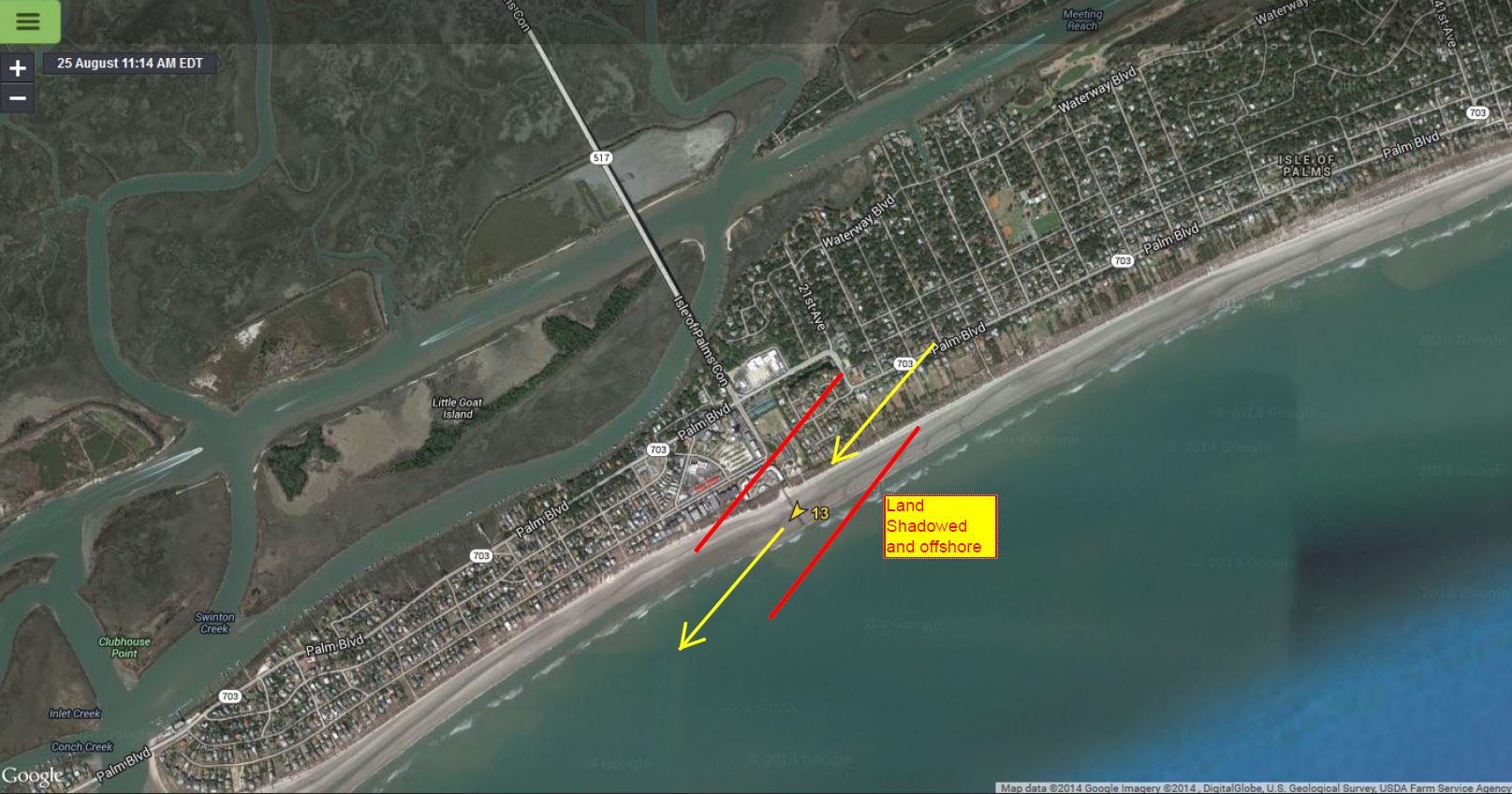 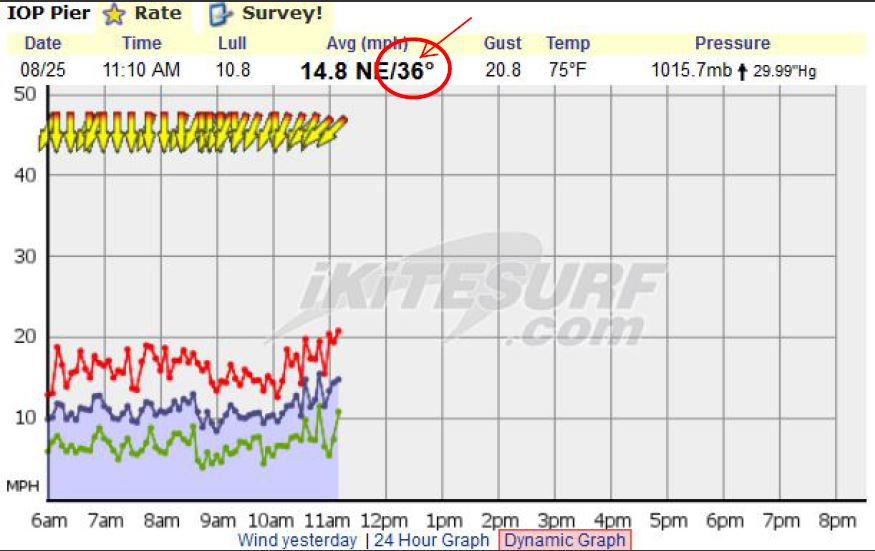 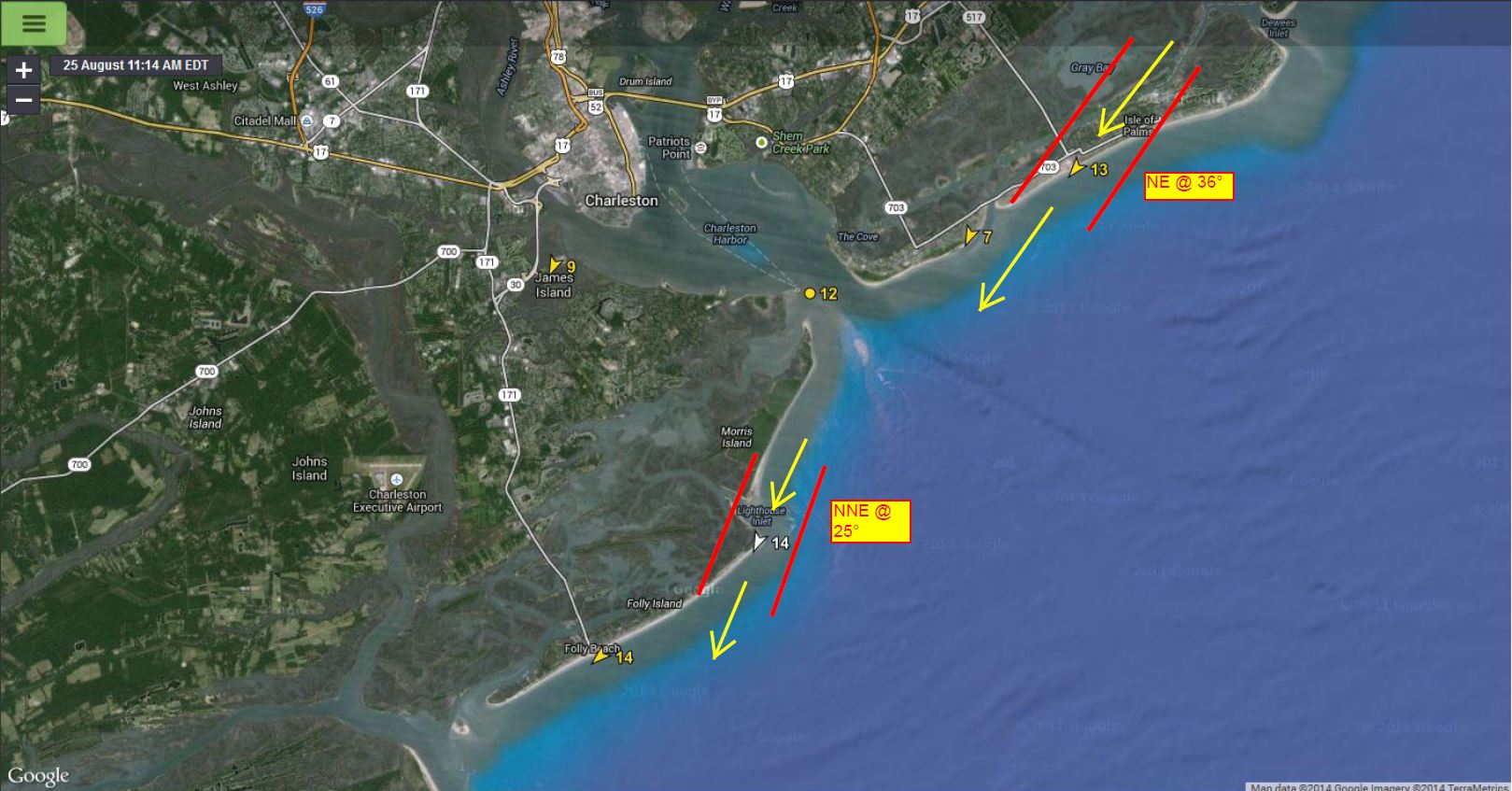 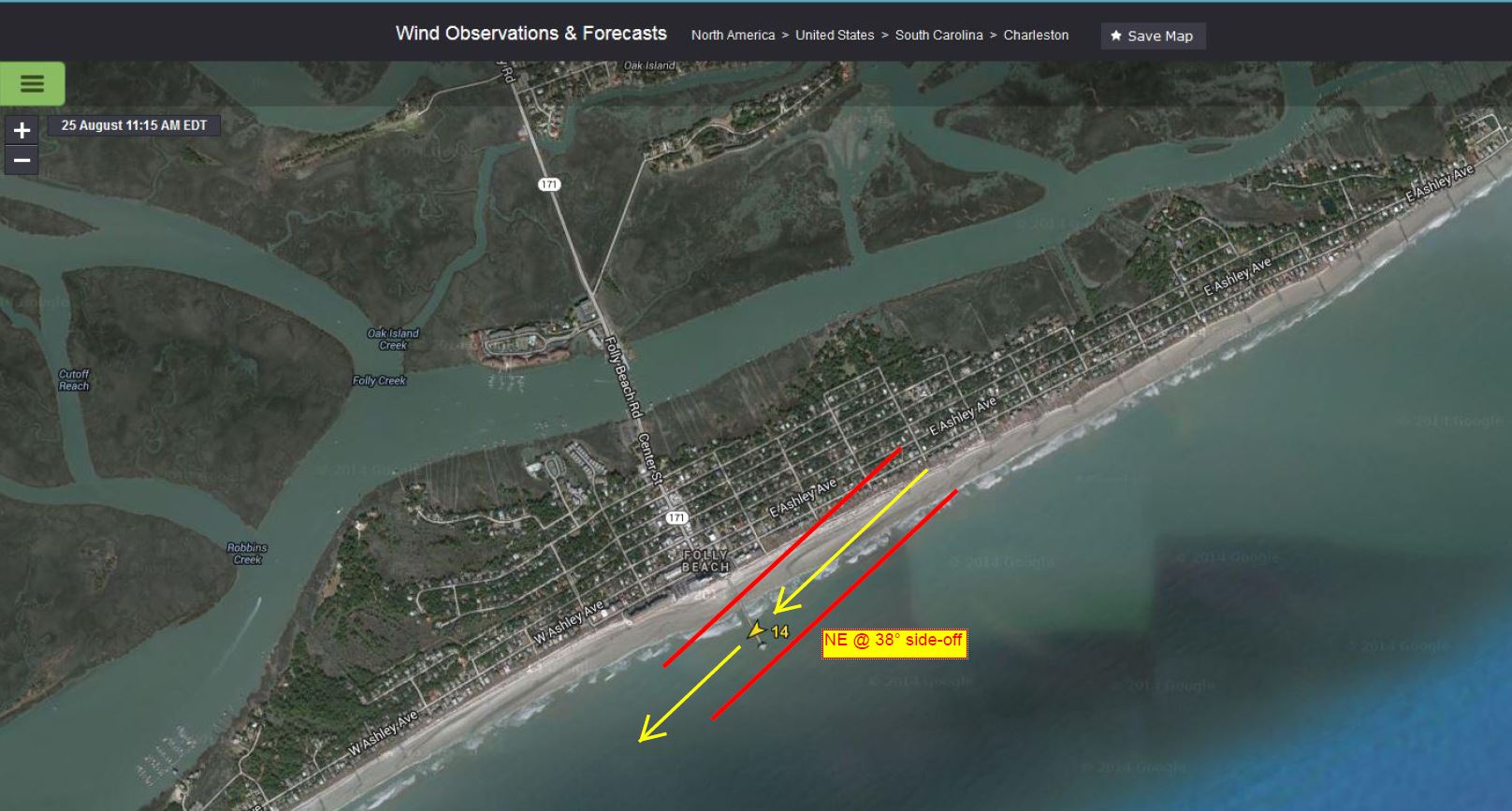 You can see how the ENE lean really makes a big difference along local sensors. Here is a graph at the Folly Beach Pier from August 24th, where you can clearly see the higher speeds as winds go more onshore between 6-10pm and fall quickly as winds become more offshore around 11pm.

And here is one from the Isle Of Palms pier on August 26, 2014 per an update to this blog since such a perfect example presented itself:

Here are some local Wind Roses for the Charleston area. The wind roses were created and shared by Charleston local Tom DeMille by using compass overlays on Google maps. These are a great example of tools to use that can help when watching azimuths for safety along just about any coastline. 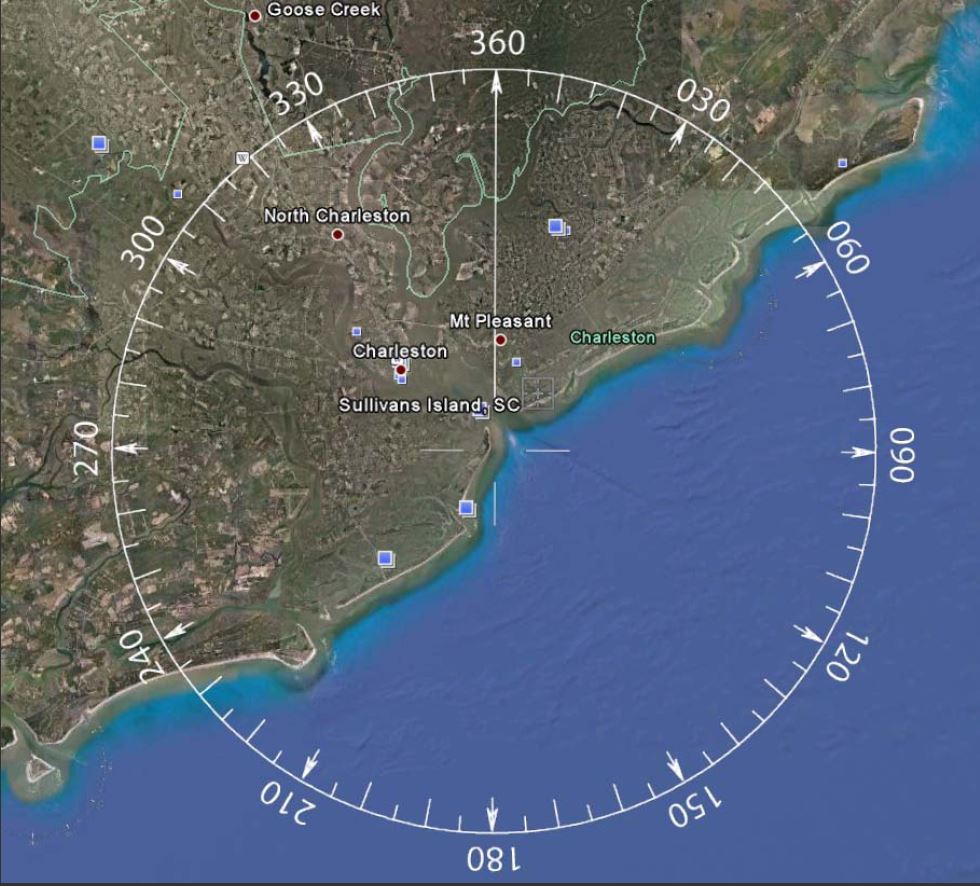 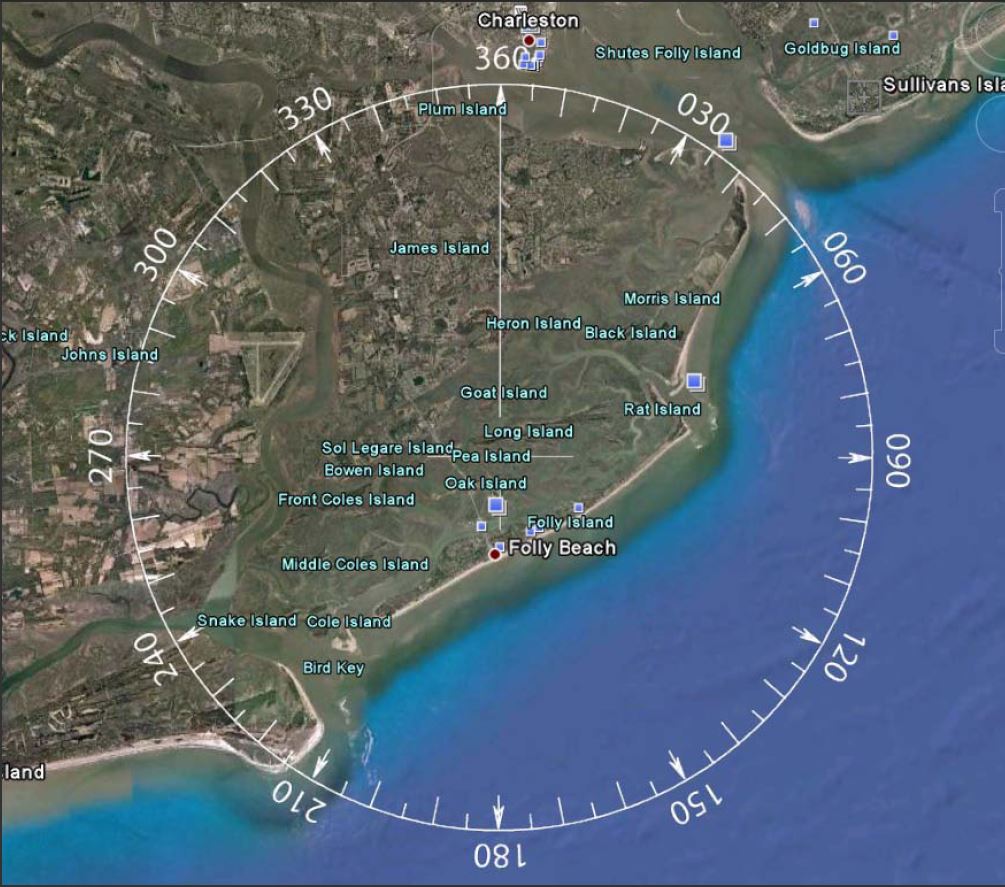 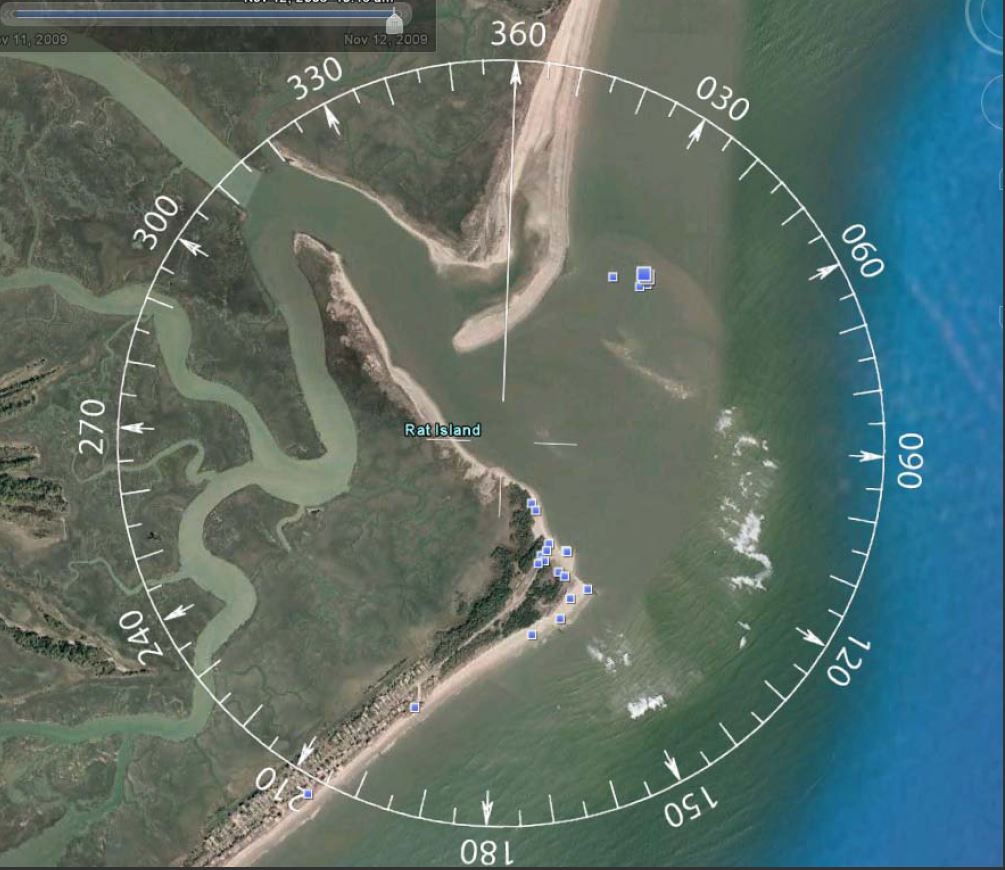 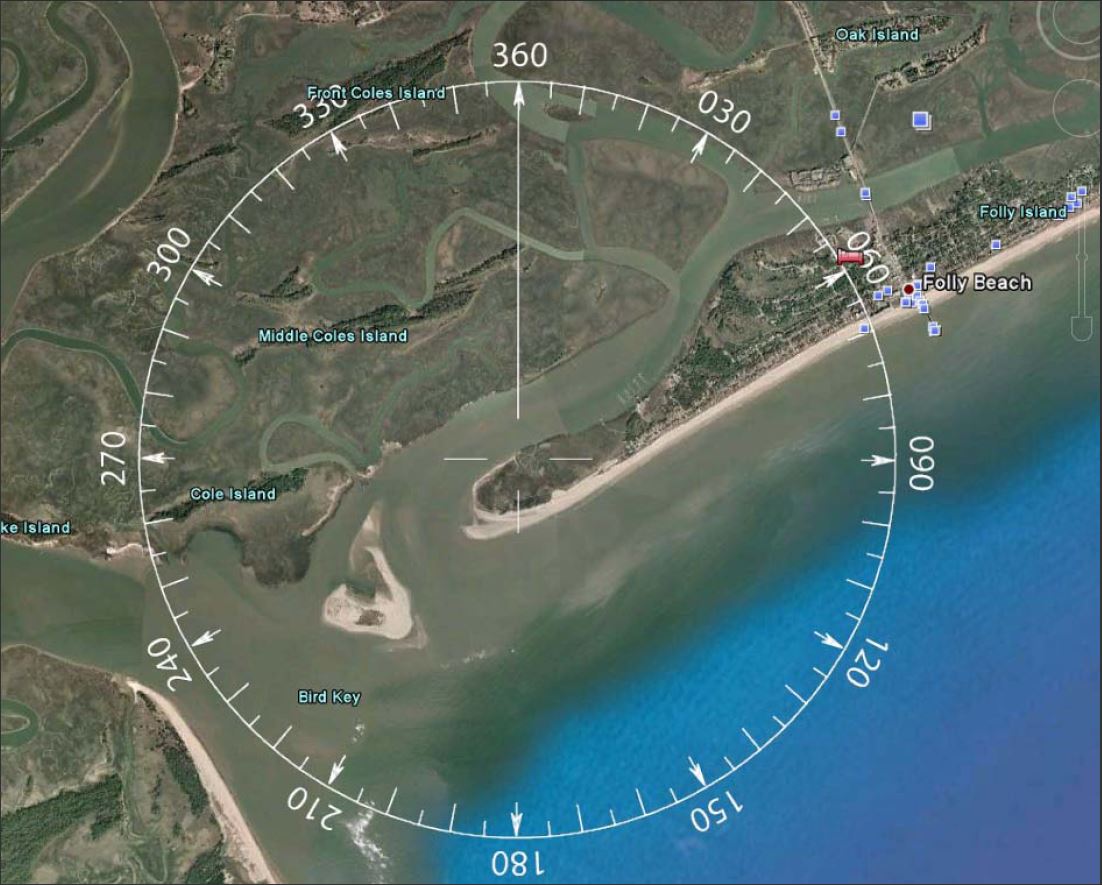 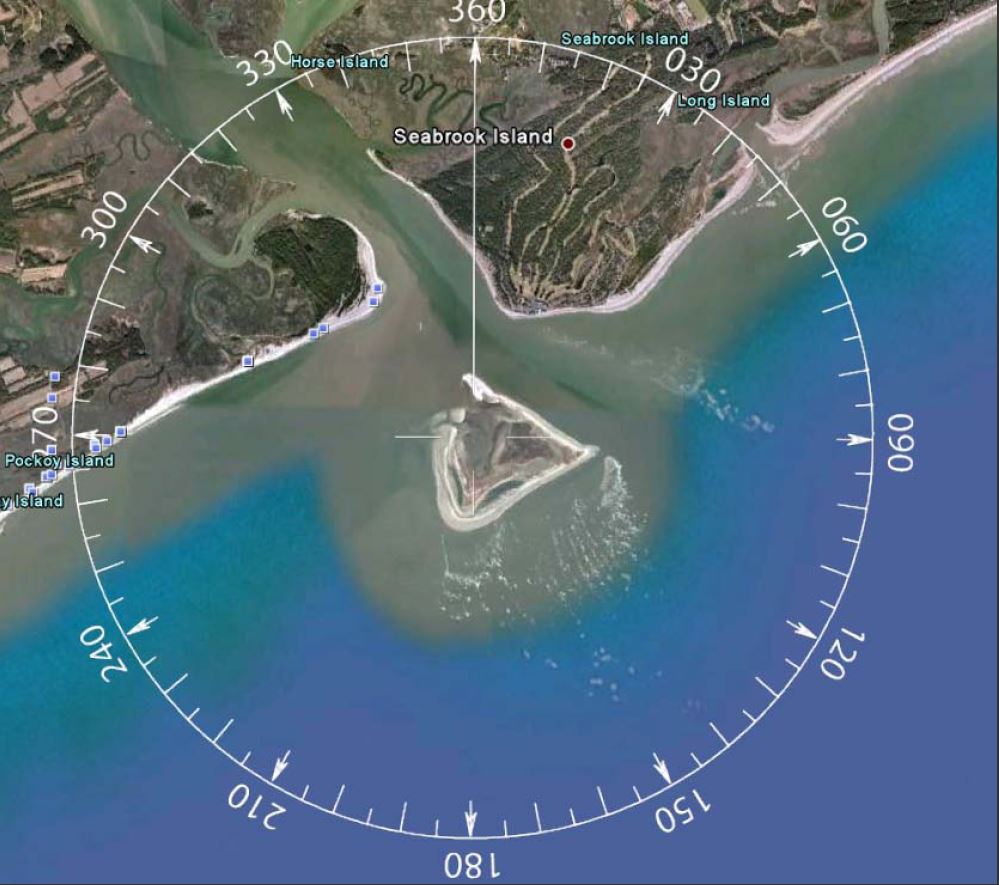 Always feel free to use our WeatherFlow stations with our apps and products to determine what the winds are doing and the most up-to-date trends: