Dissection of a convection enhanced blast at the Hatch, Aug. 2, 2015

Blog.WeatherFlow.com > Northwest > Dissection of a convection enhanced blast at the Hatch, Aug. 2, 2015

Sometimes we mention convective clouds in the forecast but often they have no impact on the wind. Yesterday they DID!

Yesterday, Aug. 2,  mid day saw lots of high thin clouds over the corridor with mild somewhat gusty winds at the Hatch. At 185 lbs. I was sailing just downwind from the Hatch slightly overpowered range

on my 4.7 sail. Feeling a wind fade I moved closer to the Hatch when suddenly there was a massive increase of the wind velocity and the temps dropped fast. 15 minutes later guys were on 4.2 to 3.7 sails in big gusts, shifty winds and random chop that made a mogul field out of the medium swell that would build then fade.

Meanwhile I was thinking of the iwindsurf.com forecast for unsettled low 20’s winds due to clouds vs. reality.

Most of the time when the forecast mentions convective clouds the convection ends being  somewhere to the north of south of the Gorge or far to the east.

Anytime you have significant convection in clouds and especially in thunderstorm there is masses of rising and descending air in the vicinity of the clouds. The cool descending air hits the surface and then spreads outward in what is called outflow. 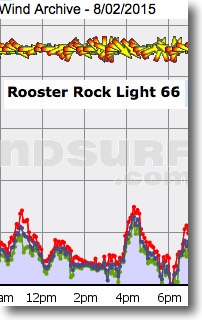 This outflow winds can add or subtract from the prevailing wind depending upon your location relative to the storm. But outflow from convective clouds to the north or south of the Gorge can not easily impact the wind on the water due to the walls of the Gorge. At most they might add a shift factor. And convective clouds to the east of  the Hatch and Swell area are not likely to impact the typical westerly wind unless the storm was right over Bingen.

But looking at the radar and satellite animations above you can see that the convective clouds yesterday came from the south and passed almost directly over the Jones Beach to Portland to Rooster Rock area.

Check out the 360 degree wind variation at the Rooster Rock sensor. This reflects the fact that Rooster was in the area where wind was falling out of the clouds prior to spreading to create the outflow.

But the Hatch and Swell were in the peak outflow area. Looking at the Hatch and Swell wind graph notice how the winds from abut 9AM to 12PM were in the mild upper teens to low 20’s range. Then suddenly about 12:30  the outflow wind from the storms to the west arrived (green area on wind graph). The arrival of the swirly outflow wind  did 4 things:

1. It added about 5-10 knots to the existing wind so the wind velocity went way over the forecast strength. 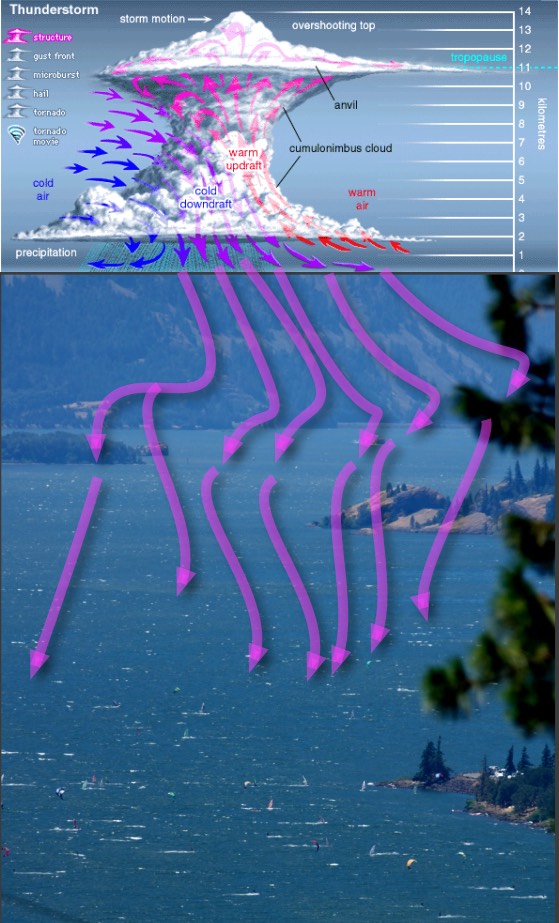 2. The swirly outflow wind add a major gust and shift factor with wind sometimes even hitting sails from both sides at the same time.

3. Prior to the arrival of the outflow there was relatively smooth small swell. But the variable direction of the outflow wind made the waters a mogul field of chop over random swell.

4. The out flow wind brought an abrupt cool down of the air in the PDX to Hood River corridor while the Gorge to the east stayed hot. This jazzed up the pressure gradient which enhanced the wind from the Hatchery to The Wall.

Around 4PM the storm moved northward and the outflow left the Gorge area and the winds dropped suddenly to the forecast range.

If would have been nice if iwindsurf.com had been able to forecast this event in advance but cloud moment on this scale is tricky. But I think we did learn to really watch convective clouds when they are moving from the south over the Cascades since if they set up west of the corridor they can really enhance the wind.

But a slight shift to the east and they would come right over the Hatch and Swell zone and the wind graph would look more like the Rooster Rock wind above.