Drawing a line in the water.

Blog.WeatherFlow.com > Southeast & Gulf > Drawing a line in the water.

Every spring and fall during the warm surging of Southerly winds, forecasters along the coastal SE Region are plagued with quite a dilemma. It’s called “marine layering”.  This presents itself in subtle and not-so-subtle ways –  such as a thin haze just over the top of the water …or a visible coastal blanketing of sea fog that meanders in-and-out of the immediate beaches during the day…and creeps into the harbor and inland at night.  Sometimes it blankets the entire coast and sticks all day. This is the result of our cooler Atlantic shelf waters remaining cold as warmer air starts to lift into the SE Region during the seasonal shift. This much warmer air creates a dense cooler layer that gets trapped at the surface and can be further thickened by hotter air pumping into the region. The wider the difference between higher air temps and the cooler water temps, the thicker the layer.  They can even increase their own additional humidity levels through evaporative effects… even with drier and warmer air over the region.

A cloud bank parked offshore is normal to see during the cooler months -especially in association with Atlantic High pressures and Southerly wind regimes. The Gulf Stream, believe it or not, actually serves as an “artificial warm land mass” in the winter when it comes to winds along our coast. You’ll notice the warmer Southerly winds much stronger out there at the buoy readings and directly over the Gulf Stream…and significantly weaker along the coast. 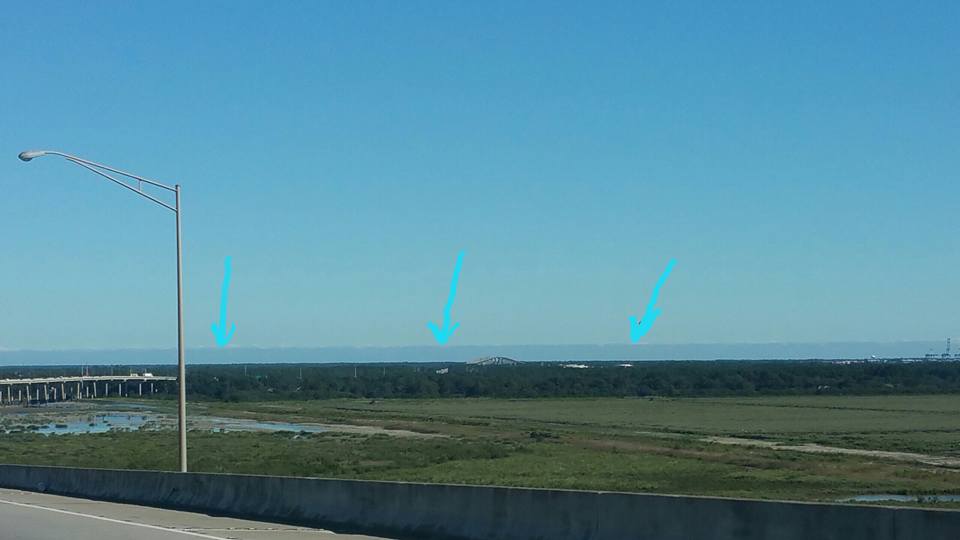 What this means for winds…is what we refer to as “decoupling”…or where the winds simply cannot elevate near the surface due to the cool stable air firmly in place.  When winds blow in off the ocean, there is only cool air backing them, which means that there isn’t a good “surface mix”. We need warmer and dryer air to fill in over the water in order for winds to increase as the air becomes more unstable. If we have warmer land masses upwind, we start to see those winds mix downwind, which explains why it’s super windy in the Charleston Harbor/upriver/inland …and very light at the beaches.  The resulting air temperatures becomes a HUGE factor as we can see up to 20-25 degrees of difference at times from the Chas Airport (for e.g.) to Isle of Palms.

Ok..so let’s take a look at March 4, 2015  where we saw a significant marine layering event unfold.  Below is an edited surface map from 3/4/15 showing a stationary boundary starting to lift inland of the coast and a cold front approaching.  Atlantic High pressure provided a healthy Southerly flow and our Sea Breeze process was on track to bring winds up along the beaches. At least…that’s what the computer models thought.  Here was my local forecast:

WEDNESDAY FORECAST 3/4/15:  Low confidence for beaches to see increases past 12/13kts today….The nearly stationary boundary is rippling over us now and slowly lifting as a warm front out of the area. Air temps are expected to warm up possibly up into the low 70’s, which could be problematic for winds to increase along the cooler shelf waters of the immediate beaches still hanging around 48°.  As the sun comes up and temps climb, we’ll start to see if marine layering presents the complication as the water surface stabilizes and possible fog blankets the coastline. Just inside the harbor mouth and upriver/ inland, we’re likely to have a stronger yet somewhat turbulent flow developing 15-20kts with higher periods during peak heating. Upon looking over the ADDS (aviation) forecast for 2:00pm today (1900UTC) for an idea of what the low level jets are doing, there is a 40kt projection at 3000ft and 40-50kts at 6000ft…which basically means that the winds just aloft are healthy enough to elevate along the beaches should a surface mix be allowed. Abundant sunshine coupled with much dryer air will be key for the mix. Should the cooler waters generate their own higher humidity levels/increased marine boundary layers with air temps being significantly higher, thin to medium fog blanketing may stick along the immediate coast to cap wind speeds at 10-12kts with a brief “punch” or two past it. Based on historical observations, the delineation line of this “fog curtain” between the beaches and the harbor could be very fine – as much as 100-200 yards wide where we see sunshine and 15+kts on one side… with fog and 7-10kts just on the other side. 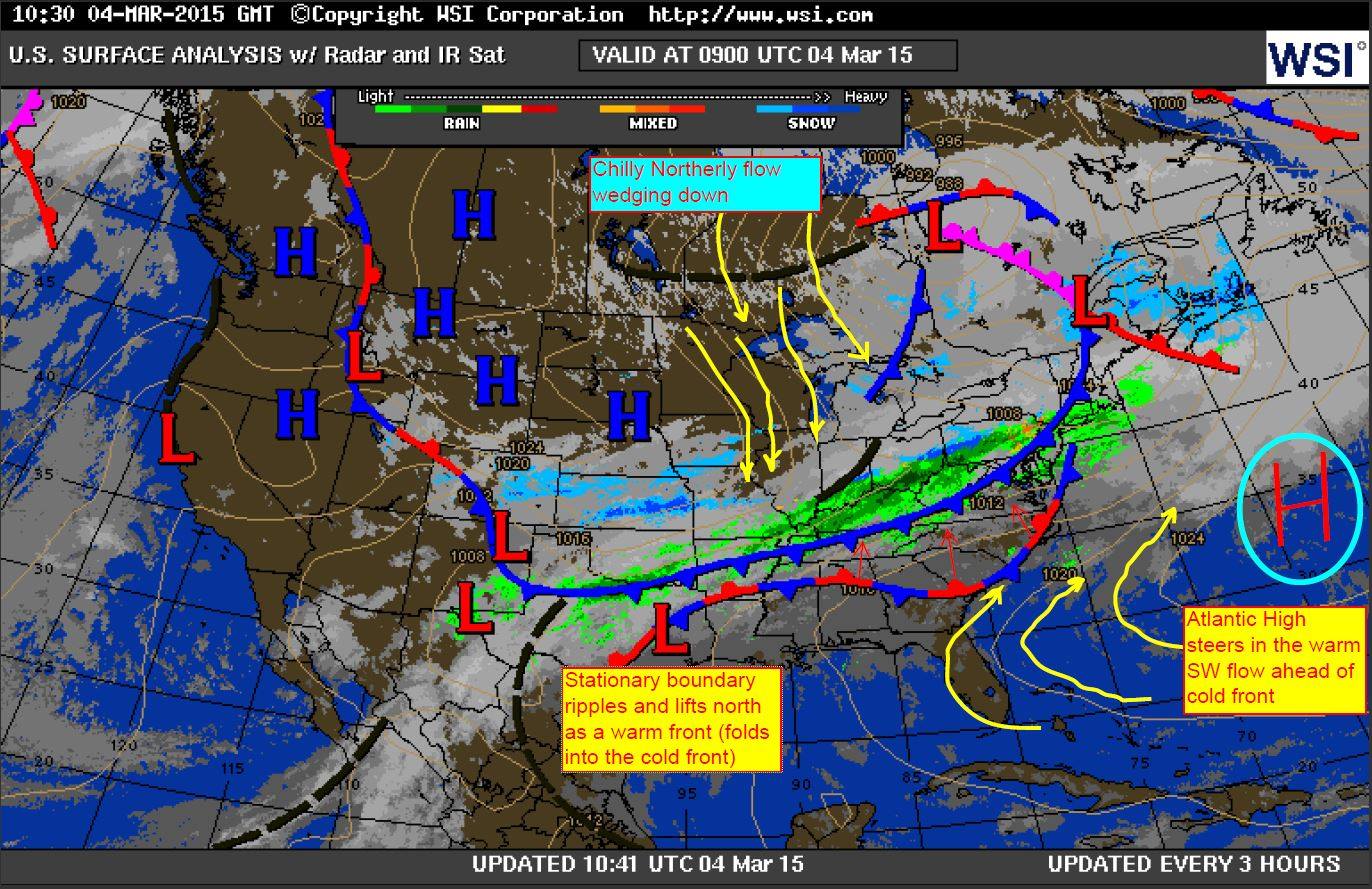 Okay so what happened?

This happened at Sullivan’s Island overlooking Breach Inlet towards Isle of Palms…a thick blanket enveloped the beaches, but cleared away just on the backside of the barrier islands over the ICW.  Why? Because land heating effects dried the air and helped clear the fog out to the north. 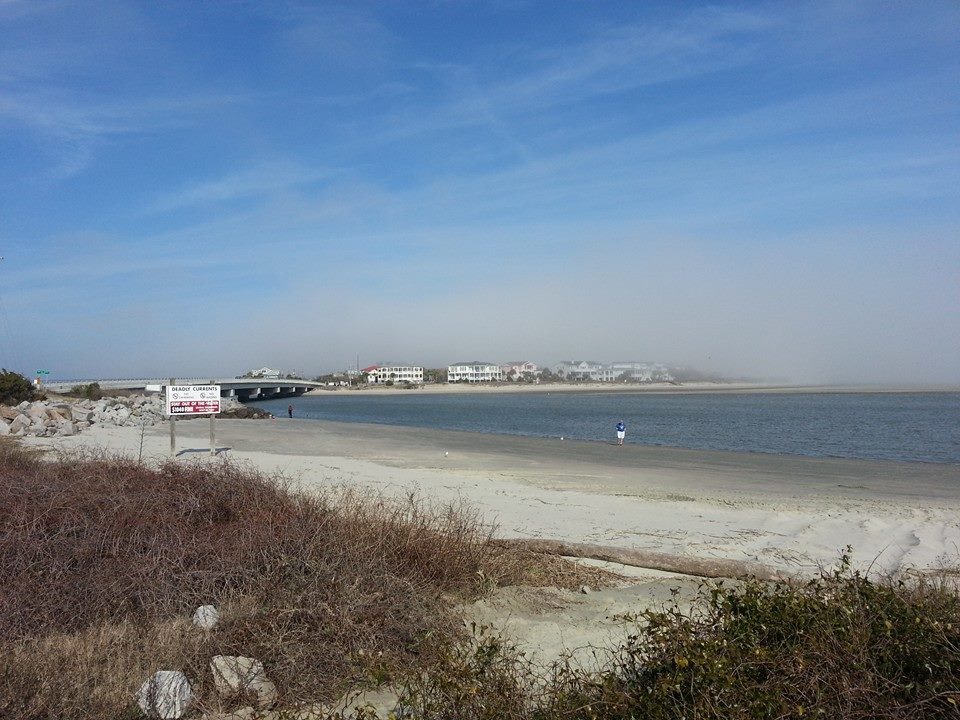 Here you can clearly see the dryer air along the backside of Sullivan’s Island all the way up to Isle of Palms..where the fogging creeps back in between wider coastal gaps to the north if you look on the horizon.

And here is a nice blanket of fog looming just outside the mouth of the Charleston Harbor. You can barely see Morris Island Lighthouse straight ahead. Nice and clear across where Morris Island and James Island provide that warmer, dryer air. 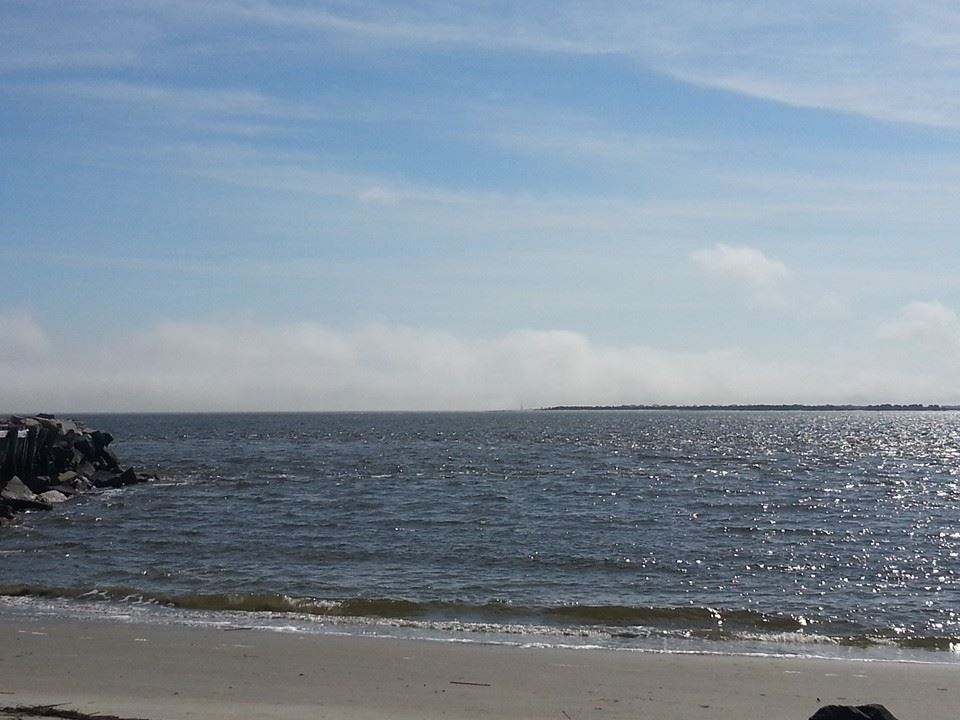 So what were the winds doing? First let’s keep in mind that the Sea Surface Temperature was still a chilly 48° – 50°.

Here is the Isle of Palms Pier graph and info- the winds were SW and blipped up into the mid teens during areas of temporary clearing, but stayed down at or neat 10kts for the most part as fogging won out. Notice the high air temp – which only reached 57° at 10:40am and stayed cooler all day between 50°-57° with the cool onshore flow.  Air temps at the airport reached 80°. That’s a 23°- 30° difference!

Here’ the harbor–where winds cranked up to a rather turbulent flow and actually warmed to 67° with help from land masses to the south.

And the airport…proof in the pudding for much warmer air temps topping at 80° and higher wind speeds (higher turbulence as well).

DRAWING THE LINE IN THE WATER

OK…so what was going on in the harbor vs the beaches?  Here was the early morning shot where you can already see the difference.  The physical observation I put to the test on the water was done kiteboarding in the mid/late afternoon hours during the higher peaking of speeds- and the purpose was to find out how wide this line of demarcation really was. Launching from Fort Moultrie on Sullivan’s Island just inside the harbor and heading east towards the visible curtain, I noticed that winds started to cut off wherever the land mass to the south stopped feeding the warmer air across the harbor. This line was literally 50-100 yards wide where winds fell off drastically to a point where turning back the opposite direction was the only choice to “keep the wind in the sail” so to speak. This was tested several times and I found quite a bit of turbulence in the overall wind field…and less turbulence the further upwind I went across the harbor towards the source of the instability.

By 8:55am things start to increase with the sun heating things up. 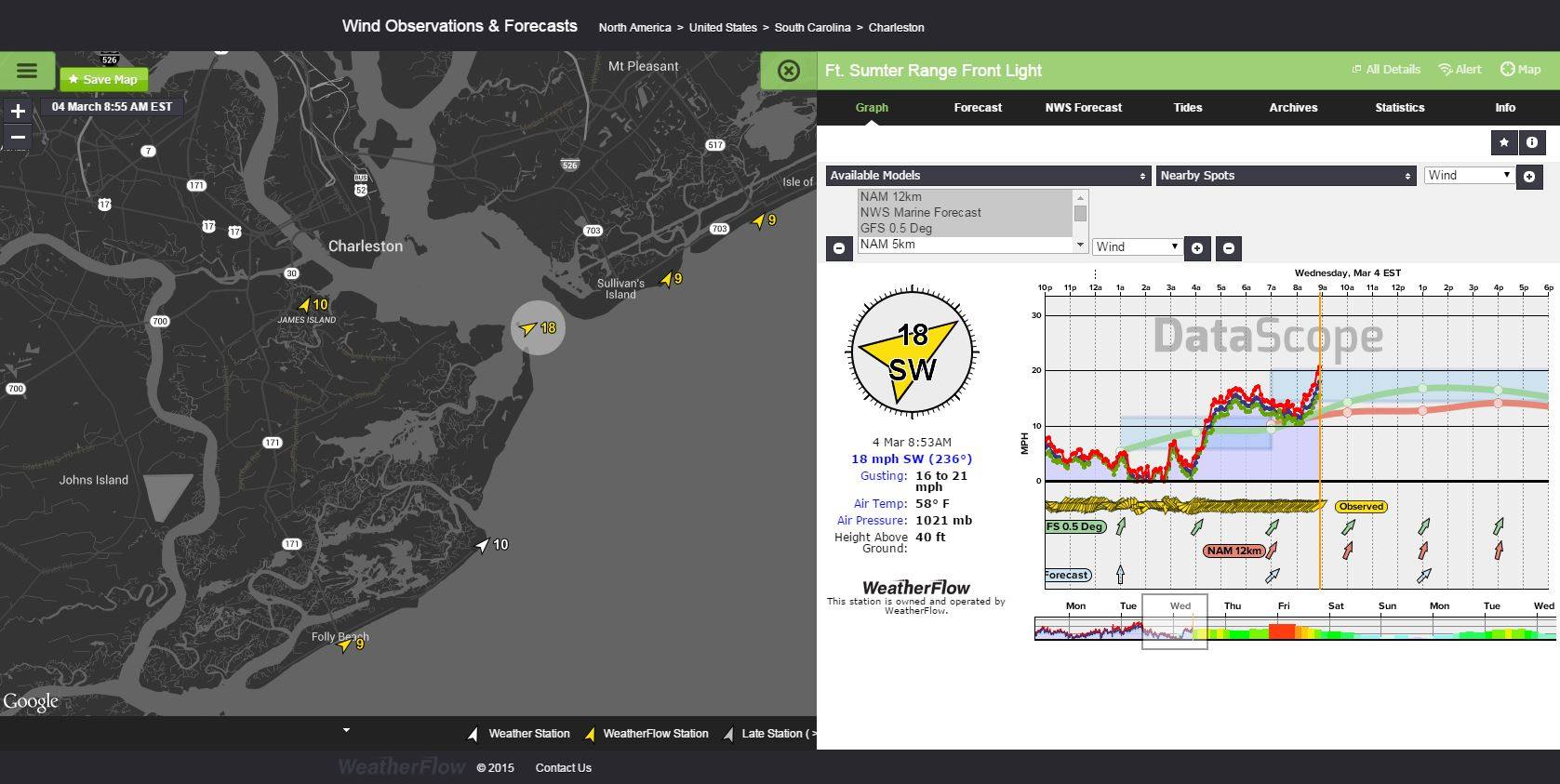 So let’s look at another “line in the water”…April 9th showed a period of marine layering where water temps rose to mid 60’s…but still showed decoupling. This visible layer was very thin as a result. However, the line was still there.  You can clearly see the land heating effects.  Most of James Island is rural to suburban residential to commercial, which actually increases radiation (heat) over that land as well to add to speeds. 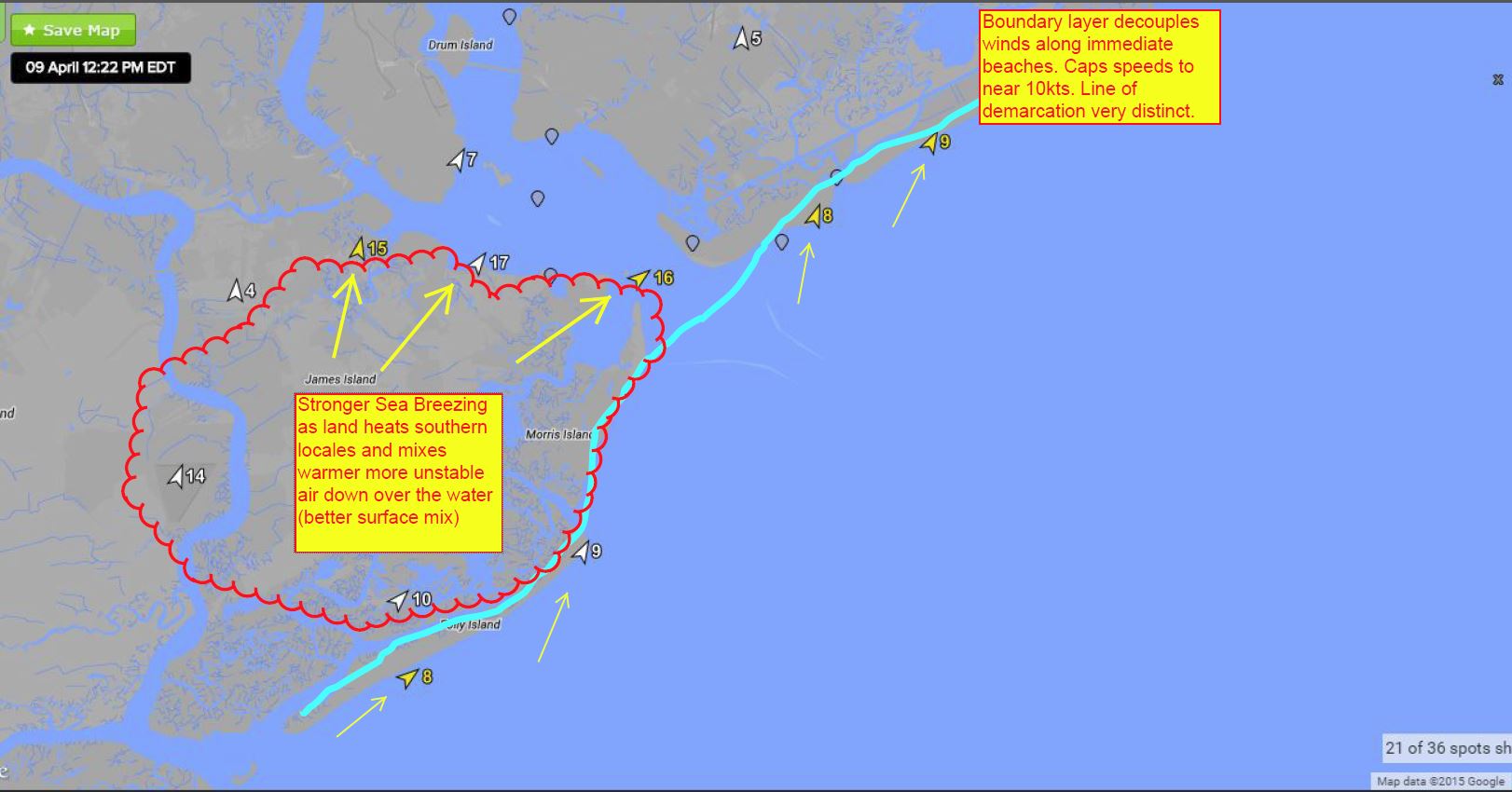 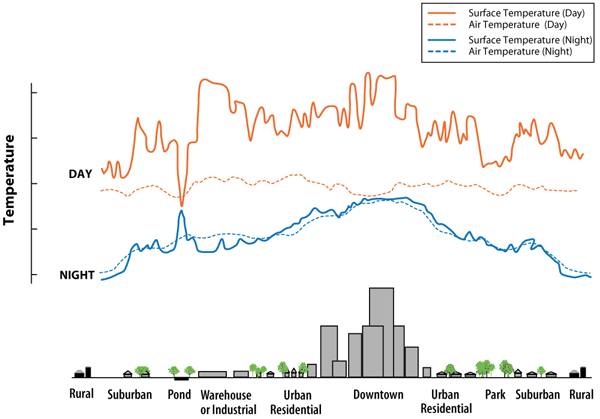 THEORY about tidal effects: Tidal flushes where there is a 6-7ft swing should have warm pluming effects to the harbor waters all the way to the mouth as the recently warmed fresher water from inland marches/estuaries mixes into the higher body of salinity heading into the ocean.  This would keep fogging just outside the harbor mouth. Adversely, cooler water water pushing into the coastal breaks would likely carry the cooler more stable water and its coupled fogging just inside the harbor to a point.  These have been observed to a point, but not enough to say this is conclusive evidence. 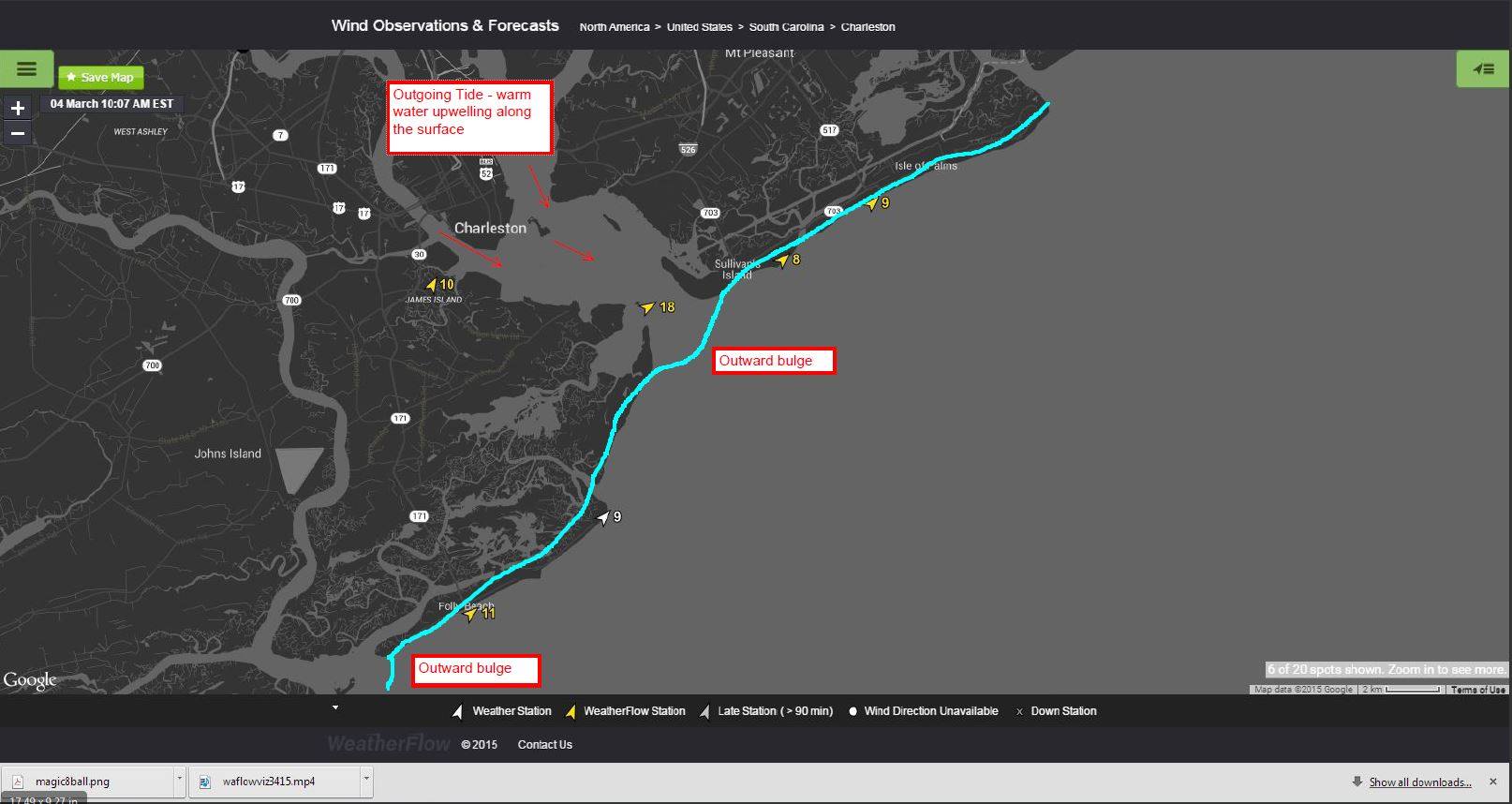 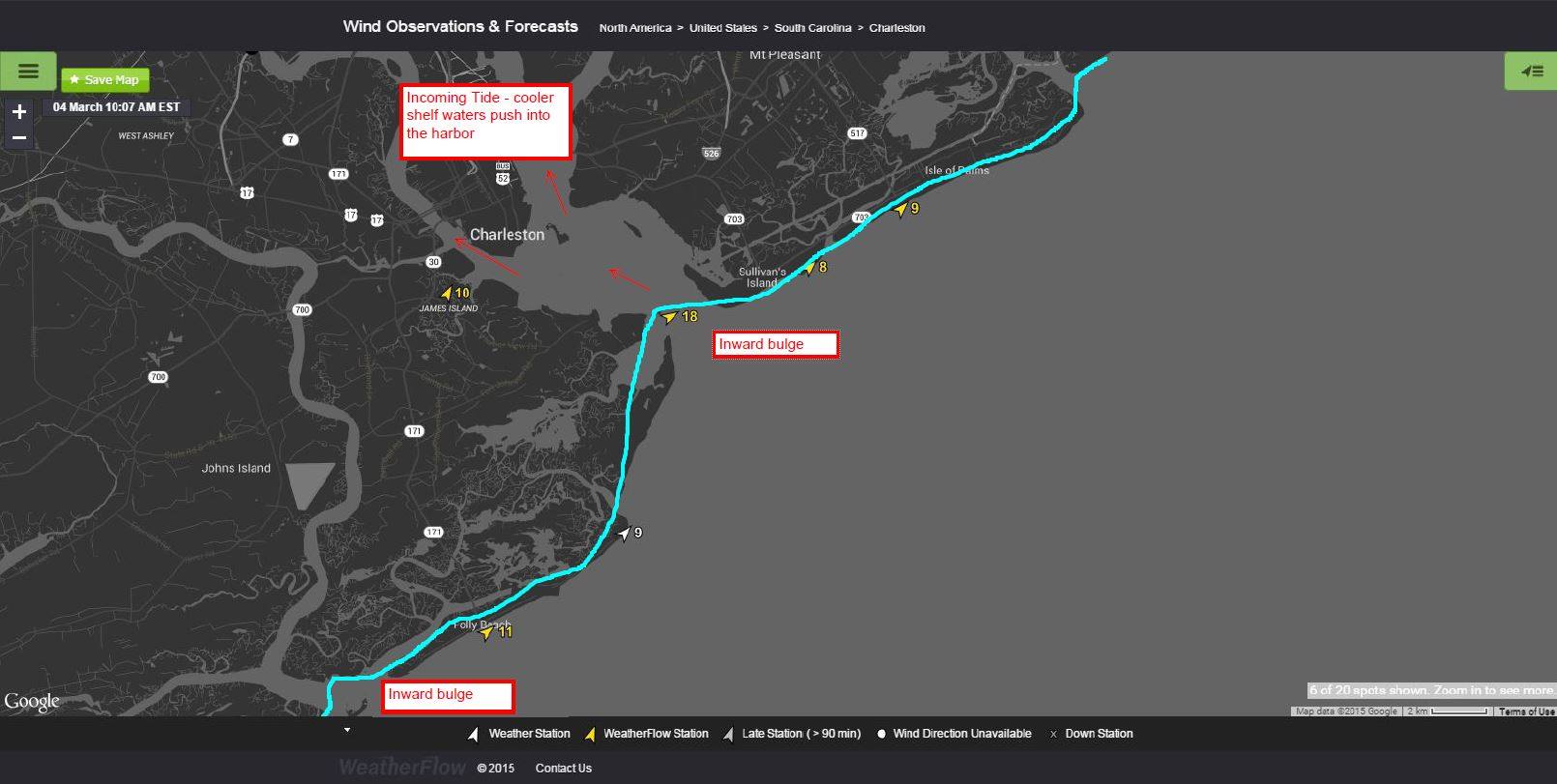 Here is a stratocumulus fog bank being lifted inland and edged out by dryer air. This dissipated in minutes. 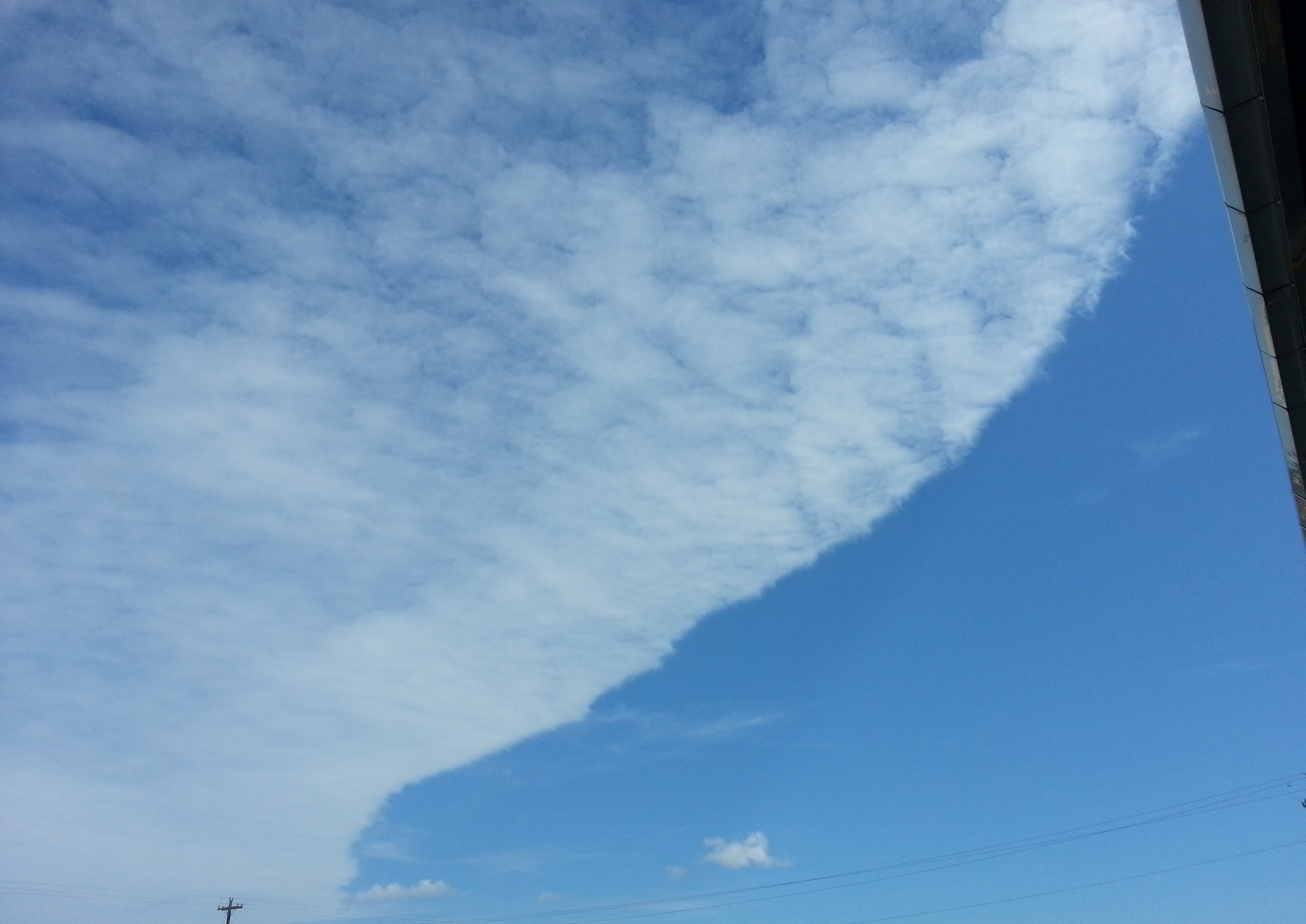 Conclusion: The correction to this issue comes when water temperatures start pushing into the mid 70’s and higher. Warmer water helps create a better surface mix for the local Sea Breezes as we get into the swing of our hot season here. Looking at the SST animated chart from April 1st to April 21st…water temps are rising fast. Already right around 70°!

Stay safe out there.