Today is the big day for astronomers and amateur observers.  Eyes will be turned toward the heavens to view the solar eclipse – that is if you have the right protective glasses. Fortunately the latest satellite shows that clouds will not spoil this event for much of the West. 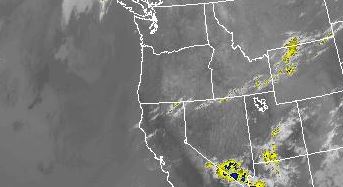 But while most of the focus is on viewing this phenomena  there are other ways to experience and observe it.  Here at Weatheflow we are all a bunch of science geeks so none of us are missing this event but our focus is not just of what the eclipse looks like.  We will also be watching to see how the change in solar radiation effects our temperatures and our winds.

The suns radiation is the heat source for our wind systems both large and small.  The unequal distribution and absorption of radiation creates warm and cool pools of air that drive our winds. As the moon passes between the earth and the sun, light will be blocked from hitting the earth’s surface.  In the path of totality there will be a  period of about 2 hours where the sun’s radiation will be diminished.  Just how much will that affects our temperature and winds is a subject that is up for debate.

Since eclipses are few and far between there are not many studies to draw from.  There are predictions that temperature could drop 10 degrees during totality.

Weather data from the eclipse of 1900, which cut a path across the Southeastern United States was studied by  H Hein Clayton who determined that there were changes in temperature, wind speed and direction and hypothesized that a cold core cyclone had developed.  These finding were criticized and future studies have sought to prove/disprove his theory.

The latest and possible most comprehensive study of the effect of an eclipse came in March of 2015 when the United Kingdom lay just south of the path of a total eclipse. This event was studied to see if there were appreciable changes in the weather.  Professor Edward Hanna of the University of Sheffield coordinated the research.  His study revealed that on average the temperature dropped about 2 degrees Fahrenheit over 40 minutes. There was a detectable change in wind speeds but not enough that the average person would notice. Winds dropped by about 9 percent.  But there was no evidence of a change in wind direction which would disprove Clayton’s hypothesis that eclipses create cyclones.

What can we expect today?  While most of the West is clear the coast is contending with marine layer clouds. An upper level low has helped to stir up deep and intrusive marine clouds that have moved well inland for Northern and Southern California.  They will be slow to clear so head well away from the beaches if you want a good chance to view the event.

It will be hard to find a place where the winds will be strong enough to detect a notable change due to the eclipse.  With the marine layer in place and the early hour for the eclipse our sea breezes will not have had a chance to build. There will be few places where  you will experience a noticeable change due to the reduction in sunlight.  But if you do please send in your observations.  We will be here watching our graphs and will report what we see too.