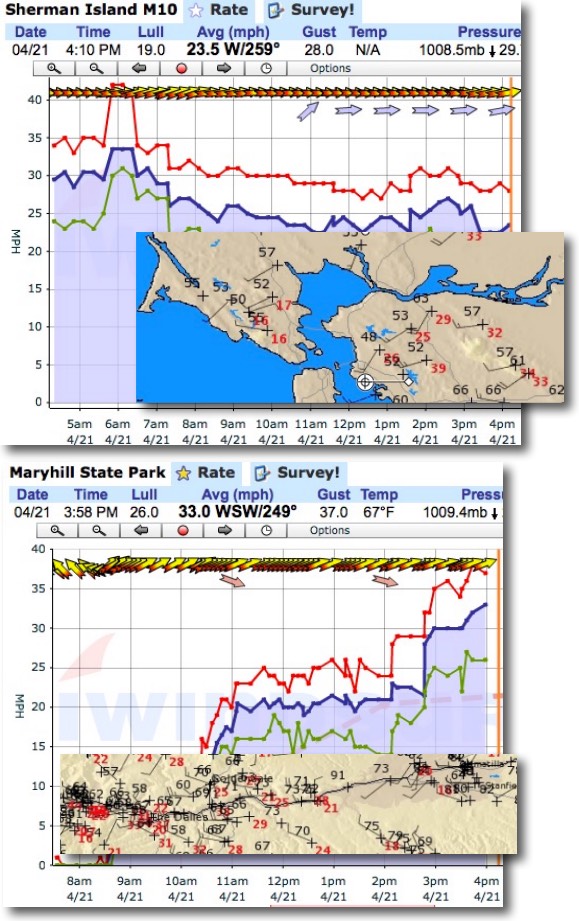 Yea, you read about upper ridges and upper troughs
all time in the forecast.
Let’s see them in action!

Check it out! The top image songs gusty winds in the mid 20’s range all day at Sherman Island. And the inset shows the wild gusts on the hilltops around the bay.

Now looks at Maryhill in the eastern Gorge. Note the abrupt ramp up to the 20’s and the second ramp up into the 30’s. Again notice the powerful gusts on the ridge tops in the inset of hill top sensor along the Gorge.

What triggered these winds? For both venues local pressure gradients played the major role in the strong wind but these wind were jazzed up by that arrival of an upper trough at ≈ 18,000 ft.

Now look east of the Oregon coast and you can see an upper trough at ≈ 18,000 ft. heading towards the Gorge. The air within this upper trough is relative cool and if you live in the Gorge you noticed it was much cooler today than yesterday when the upper  ridge was over us.

As the upper trough moves towards the Gorge powerful

SW then WSW then W winds come over the Gorge. As this wind hits the Cascades these winds transfer some momentum to the lower winds which in turn stir the surface winds adding a gust factor and giving the wind a more SW cant. Since the western Gorge is close to the Cascades the wind is more turbulent especially west of Dougs so windsurfers and kiters are heading out east today.

Things are more complex in the Bay Area. You can see that the SW winds at ≈ 18,000 ft. are much weaker over the Bay Area and with warmer water to the south this SW flow and lower pressure aloft allows the marine layer to deepen so much of the Bay Area was buried in fog today. Plus all the topography next to the launch sites keeps the turbulent wind flow from reading the surface at most sites. But Sherman is further from the ocean and there is very low topography to the W and WSW. So the transfer of momentum is unimpeded at Sherman Island. Again most of the wind is from the pressure gradient to Sacramento and especially Redding. But the flow aloft does all a major gust factor to the normally steady Sherman winds.