Gorge winds: Autopsy of a “blown away” forecast.

Blog.WeatherFlow.com > Northwest > Gorge winds: Autopsy of a “blown away” forecast.

Why does a “good” 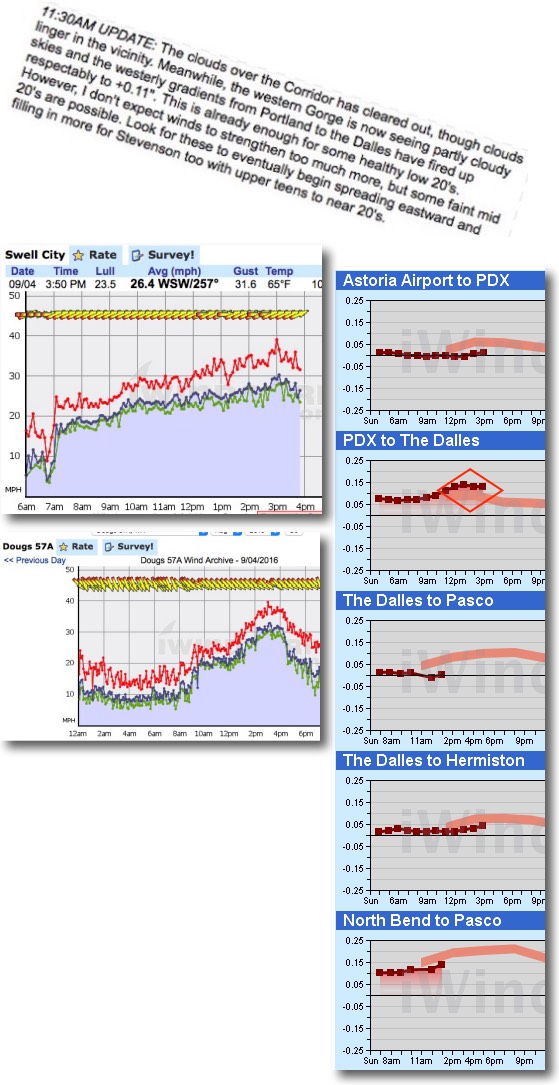 by Mike Godsey, mike@ AT iwindsurf.com

So take a look at Ben’s forecast update for the Gorge yesterday at 11:30 for the corridor winds. And looking at the Swell City wind graph you can see his forecast for low to faint mid 20’s was right on.

But it was clear by mid afternoon that his and all the other computer and human forecasts were also blown away but solid upper 20’s wind.

The question is… why do these blown forecasts happen. I mean all forecasting really just looking  at the pressure gradients right? Wrong!

Moreover windsurfers and kiters often visualize winds at a 2D phenomenon. Since we only ply the surface with our boards we only focus on the variables like wind strength, gusts, lulls, direction, shifts etc. that directly impact our sail.

But often on the west coast where there is lot of topography the winds aloft can dramatically impact the surface wind in terms of wind velocity, gusts and wind shifts.

So in forecasting we do not simply look at the pressure gradient and the models surface winds but also at the winds aloft.

Since the Columbia Basin did not suddenly heat up in the afternoon and the NPH did not suddenly lurch towards the Gorge why did the pressure gradient and the Corridor winds ramp above the forecast levels?

The answer has to do with the winds aloft. Look at this animation of the modeled winds at 4PM yesterday.

The first part of the animation shows the winds at about 2000-2500 feet as depicted GFS model. Note that it only has mild winds forecast just aloft in the Swell City to Dougs zone.

The second part of the animation shows the same winds as depicted by the famed european ECMWF that runs on the worlds fastest supercomputers devoted to modeling. Note the ECMWF only depicts mild winds aloft.

The third part of the animation shows the same winds as depicted by the NAM 5 model. Note the ECMWF only depicts strong WNW winds just aloft roaring over the Gorge in the afternoon. As this WNW wind hits the ridges up wind of the Hatch and Swell zone it becomes turbulent and transfers momentum to the surface winds as well as a direction shift.

This strong of wind also “moves” the isobars further east so the PDX-The Dalles pressure gradient jumps up and the winds at Dougs goes over forecast levels.

So why didn’t Ben notice this blast forecast by the NAM5? Probably because the NAM5 output only became available after the 11:30AM forecast had been issued.

Fortunately this is the type of blown forecast few complain about since it was a good day becoming a great day. It is on days we forecast weak winds and an epic day occurs that people get pissed.