Gorge winds fade as upper trough/upper low push NPH away from our coast.

The wind machine that creates the Gorge’s strong winds is a multipart system. Some parts are small scale geological factors like the many places where the walls of the Gorge narrow creating one or two side venturi effects. Some are major geological features like the great heat sink of the Columbia River Basin.

Some of the variables are transient like the vort maxes of passing shortwave upper trough a ≈ 18,000 ft. that put the wind pedal to the metal on epic days. But for summer winds a key player in creating west wind is the old reliable North Pacific High.

For most of the west coast the role of the North Pacific High is simple. This huge oval dome of high pressure air between the west coast and Hawaii has clockwise winds that spiral out from its center. And when the NPH moves close to the west coast the isobars (lines of equal pressure) are compacted against the California coast range or the Pacific Northwest’s Cascades the pressure gradient goes up and the coast blows. Given the orientation of the coast the Oregon coasts sees more N. winds from the NPH while the California coast sees more NW wind. 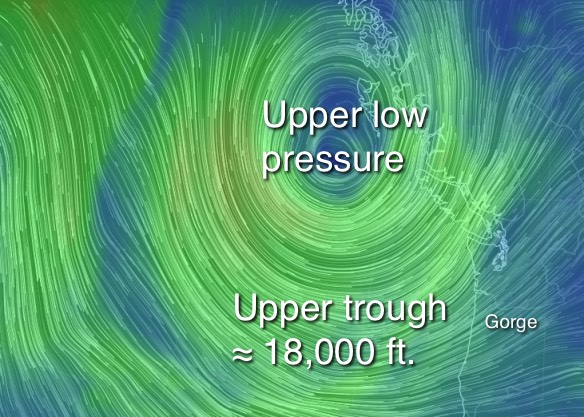 relatively low in the Pacific Northwest the isobars rise over them easily. But when the isobars encounter the heights of the Cascades east of the Willamette Valley they compress and the pressure gradient goes up. But the Gorge is a near sea level gap in the Cascades so the isobars slide inland through that gap into the corridor where they compress again. Typically this compression of isobars and the resulting pressure gradient increase first happens at Viento in the early morning, followed by the Hatch and Swell zone and finally as the Basin reaches its peak temperature and pressure gradient the isobars concentrate out towards Doug’s. This is the set up that helped create the powerful winds this Wednesday, August 5.

So how can we have such powerful winds Wednesday then such lame winds Thursday and why are the winds forecast to be limp for the next several days. The answer is depicted in this animation. First check out the dates at the bottom right as they jump from Wed. Aug. 5 to Sunday Aug. 9.

This shift in the location of the NPH happens as an upper trough & upper low at ≈ 18,000 ft. disrupt the air flow that produces the NPH so the high is forced away from the Pacific Northwest. This same upper trough also encourages surface low pressure systems to form which you can see along the coast.

Once this upper trough exits to the east the North Pacific High and our winds will return to the Gorge.