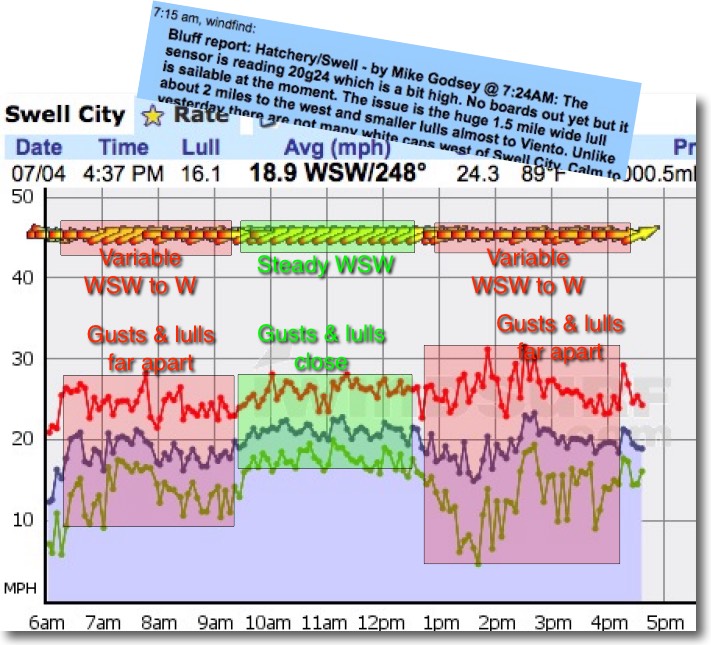 Why are the Hatchery/Swell winds often fluky in the early morning, then GREAT mid morning to early afternoon and then become WEIRD especially during a heat wave?

If you use my “Bluff Reports” you will often note my comments like the one you see to the upper right about bands of lulls inbound from the west in the morning.

I do these reports since in the morning the sensor often shows winds in the upper teens to low 20’s when the actual wind on the water is much weaker due to passing lulls.

Lets look at the wind graph  from 6:30AM to 9:30 AM for yesterday to illustrate this.  Notice how the average wind is in the upper teens just above 20 knots. So if you looked at the 7:30 AM sensor reading you might think there would be decent light wind sailing at the Hatch.

But the Bluff Report tells the true story. From my vantage point above the bluff I could see a huge lull inbound from the west many other lulls dotting the waters from the Hatch to Viento. So if

you made the drive and launched at this time, as some did, you would find yourself in Plane & Slog mode.

So what causes this frequent early morning pattern with bands of lulls marching down the river from the west?

And why does my report change later in the morning with the signature sign off  “Last Report of the Day” as I shoot out the door to the Hatch?

It all has to do with heat and stability:

In warm weather patterns the morning mild wind coming in from the west is relatively cool dense air especially if there are lots marine layer clouds choking the far corridor. In geek speak this air is called “stable air” since it is dense and cool compared to the air above it. So if topography makes the wind lift

it promptly flows back to the surface. If you have ever sailed the San Francisco Bay in the summer you have probably marveled how steady the winds is compared to the Gorge. Why? Because the Bay’s cold foggy air is very stable as you can see in this beautiful time lapse by Simon Christen.

In the Gorge the very early morning hours the air is relatively stable so the heavy dense air flows like thin molasses over the water like you saw in the Bay Area video. And when this wind hits an obstruction like the many ridges and points that stick out into the Columbia it simply climbs over the land then flows downward and reattaches to the water and continues up river.  This is why dawn patrollers know the Hatches steadiest winds are almost always right after dawn.

But as the sun rises higher in the sky between 7 and 9AM it begins heating those same land points and ridges. As they heat parcels of warm air begin to rise from this land. Now as the west wind comes over those points the wind is lifted further away from the surface and is also heated. So the mild morning winds becomes less stable and do not reattach to the water surface very well and the direction changes easily.

Scroll up and you can see this easily in the first  green portion of the wind graph. So when the wind hits the points sticking out into the river west of Swell City and the Hatch it creates bands of lulls and gusts that appear to march to the east as it ripples over the waters surface. This creates frustrating sailing since you take off from shore between lulls and then slog as a lull marches over you. It is fascinating and a bit sadistic to watch from the bluff since you can see someone on a screaming reach oblivious that 100 yards to the west there is an inbound lull that will have them slogging in a few seconds.

By mid morning the wind is strengthening and flows over the points faster and is less impacted by the heating of the land. So the wind becomes 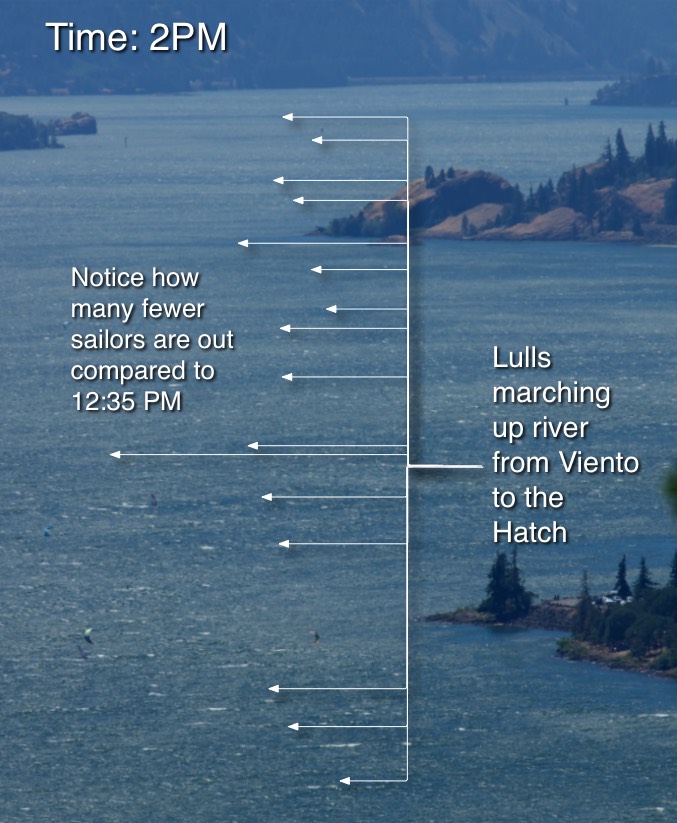 steadier. Look at the green part of the wind graph and you can see that the average, gust and lull lines are much closer together and there are few wind direction shifts. This mid morning to early afternoon  is the prime sailing time when the temperatures are hot.

But why does the wind often get weird or even fade in the early afternoon?  Take a look at this photo of the Hatchery/Swell waters from yesterday at 12:35PM.

The first thing you notice is all the sailors and kiters ripping across the water at the Hatchery and Swell City.

But look carefully upwind at inbound lulls indicated by the white arrows. In the afternoon as the walls of the corridor and the various land points scorch greater masses of hot air rises. This causes the same wind
disruption as we saw in morning but on a more severe scale.  So major lulls and wind shifts begin marching towards the waters of the Hatch. And at the same time Portland is heating up so the pressure gradient is fading a bit at the same time. Scroll up and take another look at the 2nd red area on the wind graphs and you can see low quality of the wind.

This second photo was take 1.5 hours after the first photo. Note how few people are on the water. The experience on the water over that 25 minute interval between photos was of increasing lulls, shifts and weakening winds… in short “weird wind”.