We saw a very rapid intensification of a thunderstorm breakout as areas of convection met the urban heat of downtown Charleston and industrial zones just to the north. The general flow at all levels for the day was West to East except at the coast where we had a Sea Breeze front steadily holding mid teens SSW flow. Overall air temps hit mid/upper 90’s inland for the fueling…with humidity causing heat indices to reach 110-115 degrees. Over the cities, we could easily have found 100-105 degrees with higher indices near 120.

The day started out mild with heat building throughout the morning.  There lower mid level blanket of strata (slight inversion) about 10,000-12,000ft up pushing from the west over the ocean at about 20kts by midday. It met the Sea Breeze at the coastline, which slowly dissipated it. Heat trapped at the surface slowed the process a bit at first then came up quickly. Once the stable layer cleared, we saw a healthy build start for the afternoon as thermals were able to rise higher.

Here is the stable layer that showed through midday…this is facing South towards the ocean from about 12 miles inland up the Cooper River. 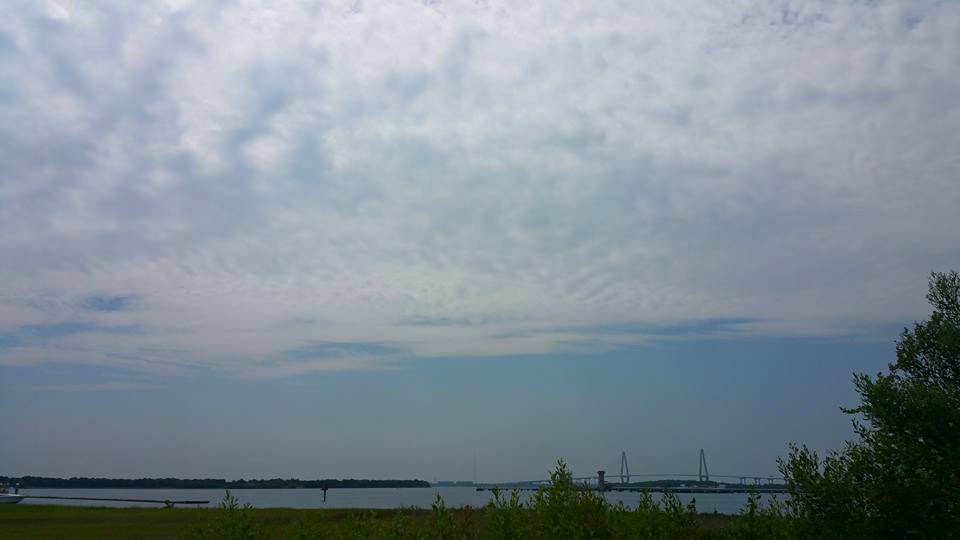 Immediate following it, skies cleared as thermals started to lift and begin the cumulus formations…with air becoming more unstable. This is facing to the West. 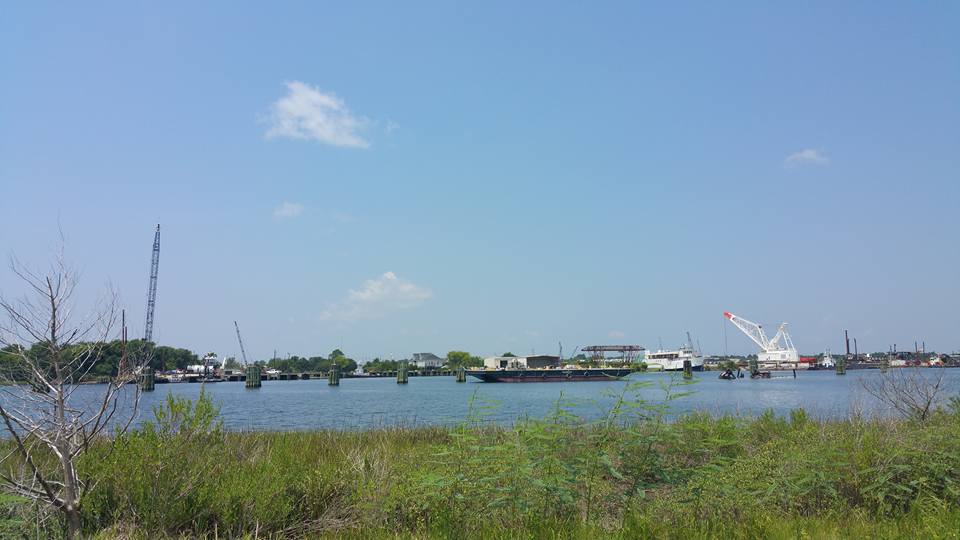 By 3:23- 3:27PM, we started to see some activity brewing to the south begin to spread northwards quickly.  A quick first very small pop-up cell swept Sullivan’s Island as a head’s up. Radar didn’t pick up on it until it was already overhead. Winds switched direction so fast a local kiteboarder’s kite flipped out into the ocean and headed offshore (amazingly, this individual did get it back via jet ski after the entirety of the storm had passed).

And six minutes later by 3:33PM we had a bow echo develop and this storm swept across the Chas Harbor and over Sullivan’s Island/Isle of Palms. 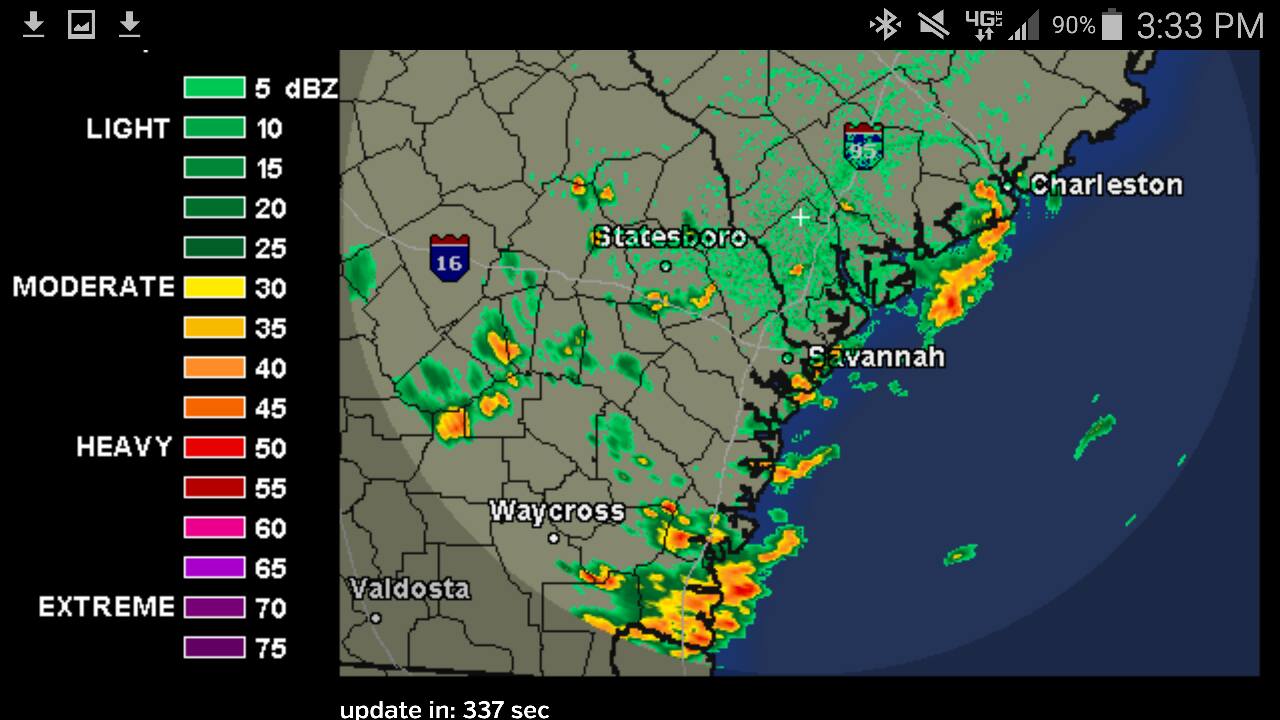 View from Sullivan’s Island at Station 28.5. This was the northern end of the storm. 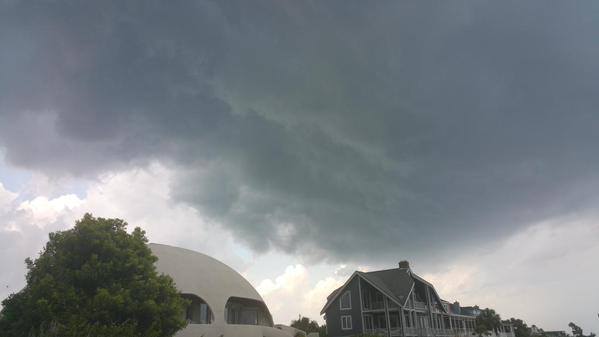 Speeds really came up. Here is the graph from Isle of Palms Pier just 3 miles away to the north. The first spike is straight line winds that reached 42mph from the SSW inline with the Sea Breeze zonal flow. The second spike was a direct result of very strong downdrafting, which pulsed up to 70mph. There was small hail that fell just minute or so before this to the south along Fort Moultrie. Possible funnel cloud within the squall?

Here’s a little vid I took from my car during the squall for some effect.

A Hobie Cat was seen on the Isle of Palms Carolina Coast webcam upending down the beach and finally stopped at the pier. 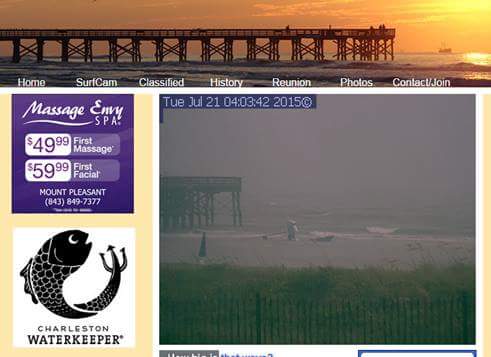 Notice the drop in air temps as well.

Following the storm, air temps came back up as the sun returned, the Sea Breeze front returned and everything went back to as if nothing had happened.  This is a prime example of what happened during a heat wave with a West-to-East storm flow that picks up quick momentum as urban heating fuels areas of convection.  Here is a pictorial of how the urban heating works to supplement heating to storms.

Just goes to show how fast these things can happen.  Keep an eye to the sky during heat waves!