By WeatherFlow meteorologist Shea Gibson on 8/29/21

On the 16th anniversary of Hurricane Katrina (2005), we had another land-falling system named Hurricane Ida that was even stronger than Katrina at a strong CAT 4 with winds of 150mph at the time of landfall. 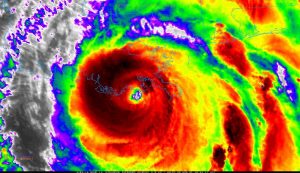 This system steadily developed in the Caribbean during this past week and was named just before crossing the western end of Cuba and raging towards the northern Gulf coast. The NHC was very accurate in its track starting on Thursday. In fact, actually amazing for being 5 days out!

We recorded winds at some of our own sensors as well as others that were very high. The eastern outer eye-wall hit first along Grand Isle at the SW Pass Pilot Station, showing winds gusting to 126 mph before blipping out. This sensor sits 78 ft AGL, so there is a bit of height bias, but still indicative of mixing those numbers down. 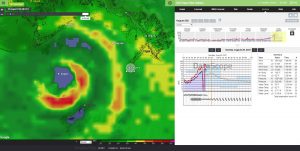 This was proven when winds gusted to 138 mph at our Dulac sensor to the SW of New Orleans. And talk about long duration of gusting period! That was hours of +100 mph gusts with a few 1-min sustained winds above 100 mph and 5-min sustained winds of 94 mph. This was not even directly in the eye-wall. 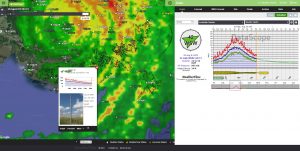 And another we have partnered with the Univ of FL, which is a mobile tower with our instrumentation on it. This was was called FCMP T1 and we saw gusts to 122 mph there as the eye passed to its west. 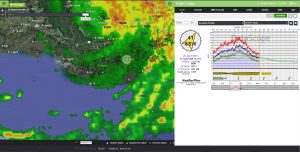 Surge was pretty bad with most forecast verifying. This is the Grand Isle East water level sensor as shown in the ET Surge prediction. Looks like it verified with almost 4 ft over HAT values (high astronomical tide). This means that widespread storm surge flooding occurred there.

Even after Ida made landfall, it continued to remain strong as a CAT 4 hurricane with 150mph winds for nearly 4 hours.

We are fairly certain that the layout of warm waters in the bayous and outlying swamp areas contributed to this maintaining of strength until it moved over more actual landmass.  This is called the “Brown Ocean Effect” and has been a great topic for study in areas such as these for some time. Here are two great articles about this phenomenon here from our friend Dr. Marshall Shepherd:
https://news.uga.edu/science-behind-hurricanes-shepherd-nasas-brown-ocean=effect/#:~:text=Marshall%20Shepherd%2C%20Georgia%20Athletic%20Association,the%20%E2%80%9Cbrown%20ocean%E2%80%9D%20effect.
https://www.forbes.com/sites/marshallshepherd/2016/09/24/tropical-storms-can-strengthen-over-land-but-be-careful-with-brown-ocean-claims/?sh=17cf3a3bd0a1

As of now, 9:10 PM CDT, Ida is still packing a punch and drawing deep convective moisture from the Gulf of Mexico.

The extreme rainfall and flooding threat remains very real not just for the northern Gulf Coast, but for many in the future track of its remnants.

We are still approaching the peak of our hurricane season, which is September 10th; however, we have seen many powerful storms all the way through October. Let’s cross our fingers for Louisiana to be spared any further activity this year.

Stay safe a stay vigilant! Have your hurricane kits up-to-date and your evacuation plans ready to execute.