TROPICS UPDATE / WEEKEND OUTLOOK 5/27/16 – 5/29/16:
Watching Invest 91L, which is still encountering some residual upper level shear and expected to move into an area more favorable for development as it drifts towards the SE coast. As of 7:45AM today, the NOAA NWS National Hurricane Center has now given this area 90% chance for development next 48hrs and 90% chance for development in the next 5 days. Hurricane Hunters will be going in this afternoon to interrogate the system and find out more information. Currently, the track guidance increases the spread along the SE region, so there is still a chance this stays offshore and passes us to the north or heads south of Charleston. Either way, it looks like we will be seeing peripheral effects with possible direct effects later in the weekend. The Low should be rather small and compact in size, so nothing significant ahead of this system is expected at this time. The GFS and EURO hold the track into the SC coast, but keep it on the weaker side as a Low or possible depression. The HWRF model is bit more aggressive as it develops it into a possible weak tropical/subtropical storm. If a name is assigned to this system, it will be either Subtropical Storm or Tropical Storm ‪Bonnie. 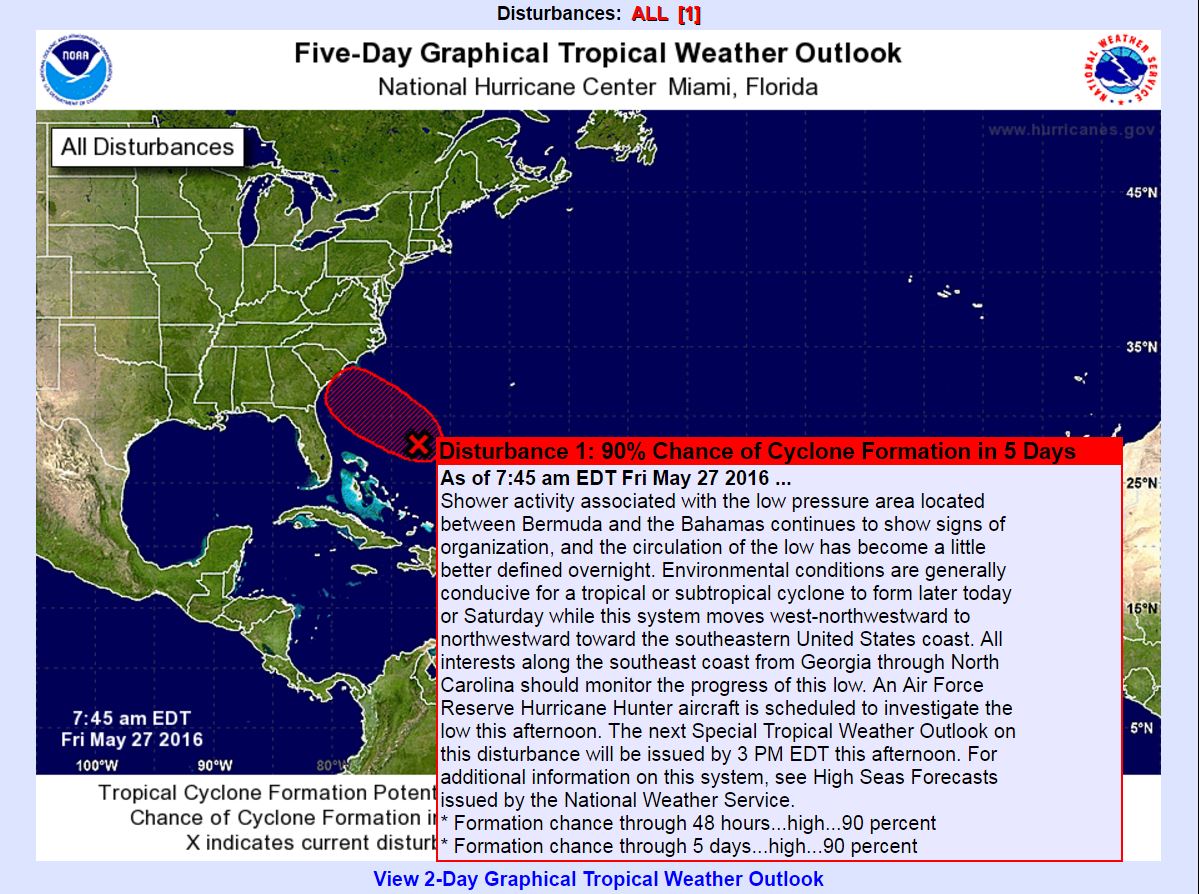 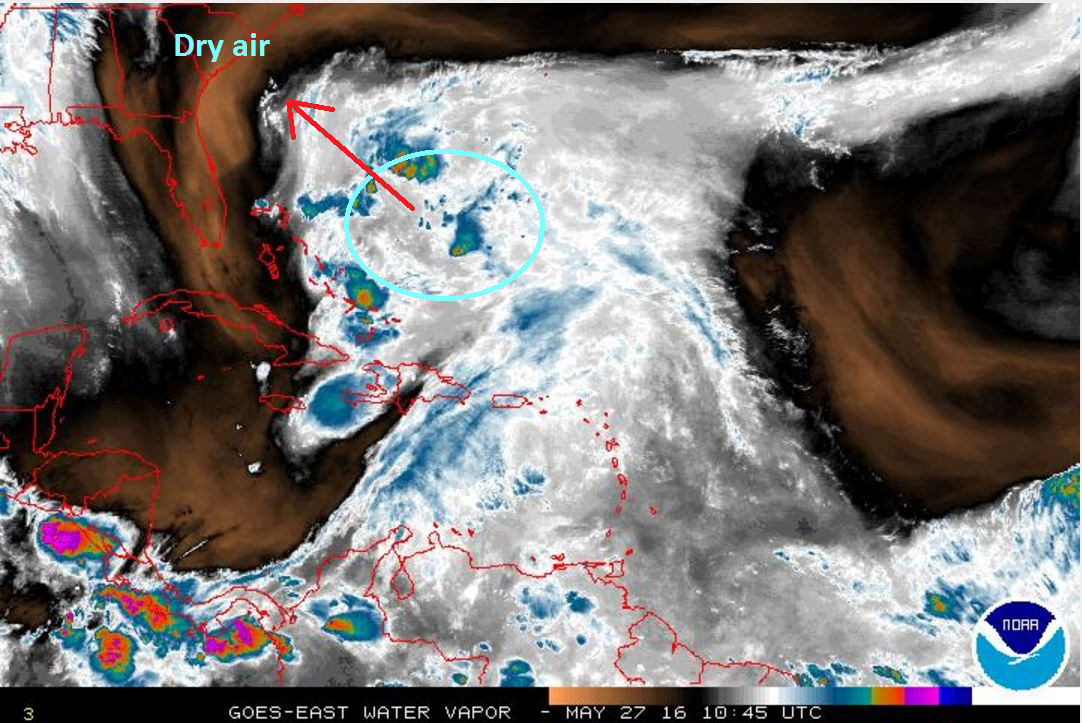 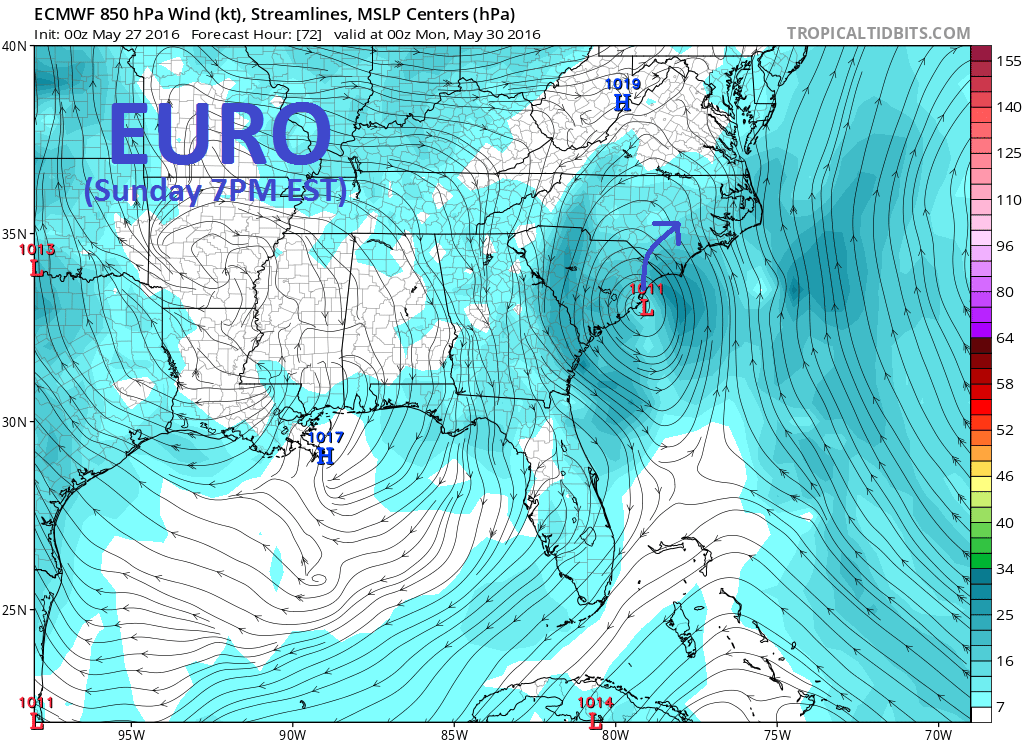 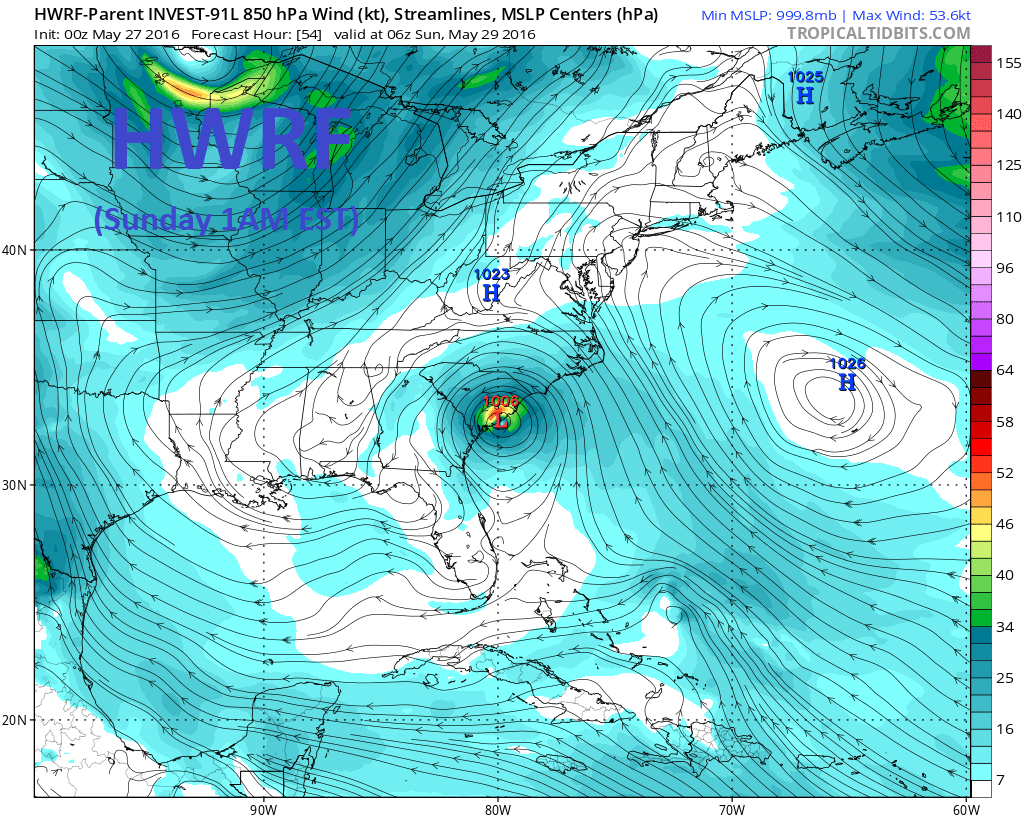 As we look at South Carolina impacts is that there is still a pretty good chance that this system stays on the weaker end as simply an area of Low pressure. Sea Surface Temps along the coast are 76.6°, so cooler shelf waters may contribute to limiting this system’s overall strength. If it does stall along or stay over the Gulf Stream, there could be some additional strengthening. Another thing to note is the dry air ahead of this system to the northwest and west, so we could see the entire western portion of it stay drier overall along our coast. We have seen this occur along our area many times before where the wind field may increase as the center draws closer, but the rain forecast is significantly less than what model outputs show upon each initialization. In other words…we have seen predominantly sunny skies with occasional convective lines working through with some of these systems in the past. That doesn’t mean we won’t see the rain potential meet some of its values, but it may only be in short bursts with steadier periods being less pronounced. See below.

Here are the risks with this system in a prioritized list:

#1 Rip currents – high risk of rip currents along the beaches with a slightly building SE/ESE swell at 3-4 feet with 6-8 second periods. With onshore winds, expect conditions to be rather choppy and disorganized. With offshore winds, cleaner conditions. Coastal erosion looks to be on the lower end this go around. (But if you do see anything significant, please let the SDHEC Office of Coastal Resource Management know at www.mycoast.org – they would certainly appreciate the reports)

#2 Rain – as aforementioned, we could see the NW, W, and SW portions of this system remain on the drier side; however, we could still see coastal banding and heavy downpours occur from time to time. Banding may contain a few storms and burst of outflow as convective lines or cells pass overhead. The steadier rains look to swath up into northern SC and southeast NC along the upper trough to the northeast of the system. If the system takes a more Southerly track (not favored), then we could be looking at a wetter pattern. Best advice is to keep an eye on radar throughout the weekend and if you are outdoors, stay weather aware.

#3 Wind – not so much an issue with this smaller more compact system. The gradient looks modest to moderate ahead of it today and into tomorrow. I fully expect the wind forecast to be rather shifty this weekend after today…but here is the general guidance for now:
–>Today the Charleston area will show Easterly winds with a suggestion for barrier island beaches to see ENE Sea Breeze coupling for mid to possible upper teens peaks. That is a coastal process and not associated with outer banding of any system, so if winds come up today, it’s not because of a storm landfall.
–>As we head into Saturday, the gradient could slip either way – on one hand we see a NE/ENE gradient increase wind to mid/upper teens again or winds could start wrapping around from the offshore Northerly directions as we head into the afternoon with only open spots seeing the moderate numbers.
–>By Sunday, it gets trickier as forecast tracks could shift, but the general consensus is for SE winds with rains/showers on the increase. Again – watching to see if we get a drier outlook than anticipated.

As always, stay safe out there!