Invest 96L Heading Towards the SE Coast. Could Become a Tropical Storm.

By WeatherFlow meteorologist Shea Gibson on 6/27/21.

This year we are already seeing some earlier-than-normal activity in areas where it would occur later in the hurricane season. Here is a prime example of a tropical wave approach that would usually occur in late July or possibly early August and through September/October.

6/27/21 Sunday 12:30PM ET Tropical Update:
Here is our tropical wave (#Invest96L) heading towards the SE coast around a ridge to its north. It is showing a blowup of convection with broad circulation around it…but still has yet to develop a closed Low. The NHC has increases its chances to 50% chance next 48hrs and 50% chance next 5 days. Anxious to see what happens when it reaches the warmer Gulf Stream and shelf waters along the Florida-Hatteras Slope. We may see this chance for development continue to go up today, tonight and into tomorrow. Timing places it over land later on Monday. Next name on the list is “Danny”.

For the weather geeks here:
The latest advanced scatterometer readings are showing the (inverted) positively tilted tropical wave w/ winds 30-35kts in the METOP-A/ascending pass at 12:07PM ET. This is a satellite which beams microwave energy to the Earth’s surface that helps gives us guidance on surface winds in absence of physical data points and/or hurricane reconnaissance. It is highly used as part of the criteria set in the Dvorak technique along with viz sat, IR and SHIPS data to name a few others. 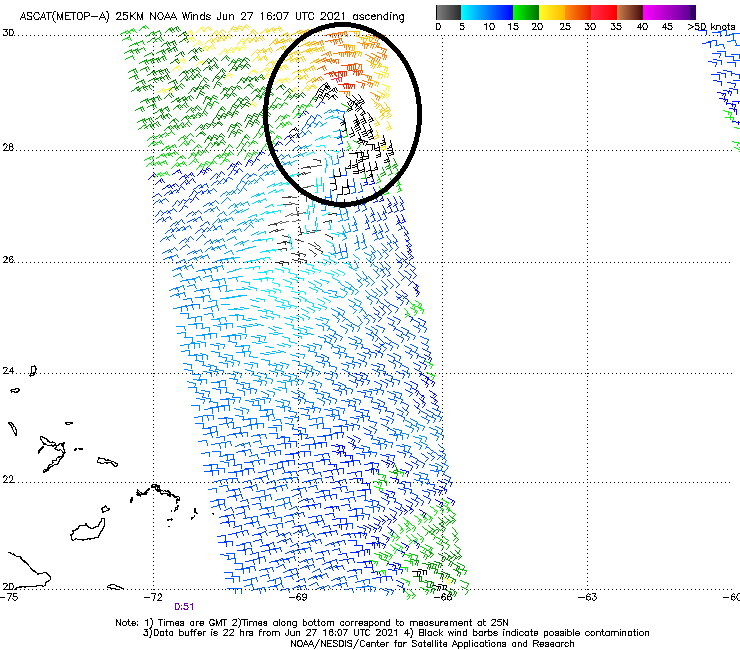 From the NHC 2PM EDT Update:
1. Satellite imagery and nearby buoy and ship observations indicate that a small low pressure system has formed about 500 miles east-southeast of the Georgia-South Carolina border. Surface pressures have begun to fall across the area, and showers and thunderstorms have recently become better organized. Some additional development of this system will be possible later today, and especially on Monday when the system will move across the warmer waters of the Gulf Stream, and a tropical depression could form before the system makes landfall along the southern U.S. coast. The low is expected to move westward today, and then west-northwestward at about 15 mph on Monday, reaching the coast of the southeastern United States by late Monday. An Air Force Reserve Unit reconnaissance aircraft is scheduled to investigate the system Monday afternoon, if necessary.
* Formation chance through 48 hours…medium…50 percent.
* Formation chance through 5 days…medium…50 percent. 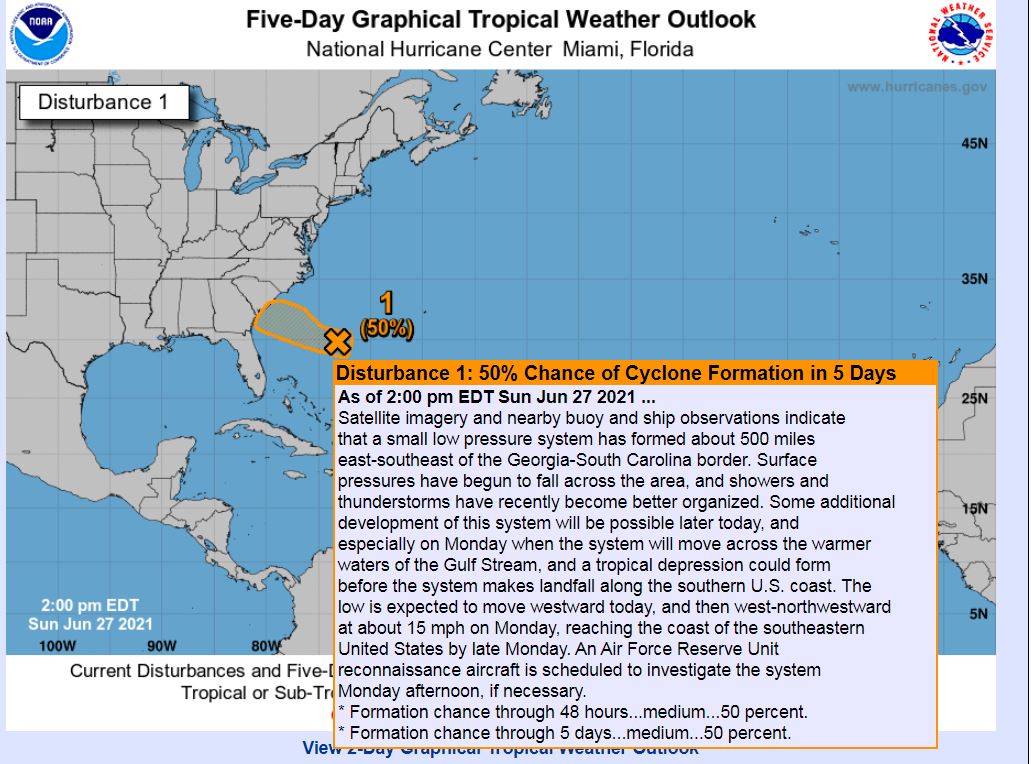 From NWS Charleston:
The main feature of interest this period will be a tropical wave heading west toward the area Monday, which has a low chance of becoming a weak tropical cyclone before reaching the coast late in the day. Whether this system actually develops into a weak tropical cyclone or not, the main impacts will be some heavy rain and breezy conditions (mainly near the coast). Higher-res model guidance suggests some spots could pick up a few inches of rain Monday, and this could lead to some localized flooding as the rainfall will be tropical in nature. The greatest risk of flooding looks to be near the GA coast, especially in urban areas around the mid day high tide.