Blog.WeatherFlow.com > California & Baja > Eddies in the Bight and Big Winds for Isabella and San Diego

Anyone who says the weather is boring in Southern California isn’t trying to forecast the winds this afternoon. The WindAlert Plus model below shows the strong winds we forecast for the NW coastline and also for Isabella today.  We expected that but were a surprised at how much the winds increased this afternoon for San Diego beaches. What is driving all this wind.

We have a strong onshore flow due to high pressure gradients to the Great Basin.  This afternoon’s surface pressure map (below) shows the center of the low in Northeastern Nevada.  Note the spacing of the isobars between that Low and the coast.  This results in the strong NW winds that have been driving down the coastline. 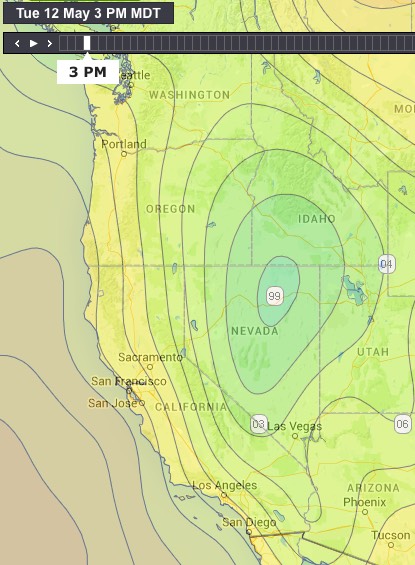 When we get a strong Northerly flow move toward the coastline the air is forced to flow over the Santa Ynez Range which is a mountain range that parallels the northern coastline of the Southern California Bight.  As the air is forced over the range and then descends into the Bight eddies form.   We’ve been watching a couple of eddies that have been churning in the Bight.  A Gaviota eddy has kept winds above 20 mph along the Santa Barbara County shoreline for the last 24 hours and another larger eddy developed overnight and has been centered just north of Catalina Island.

As the larger eddy formed the winds on the south east side of the Bight turned more southerly and the winds were funneled around the eddy and up through San Diego.  Winds have started to decrease for the San Diego beaches as the eddy fades.  Lake Isabella though is benefiting from a continuing strong pressure gradient. 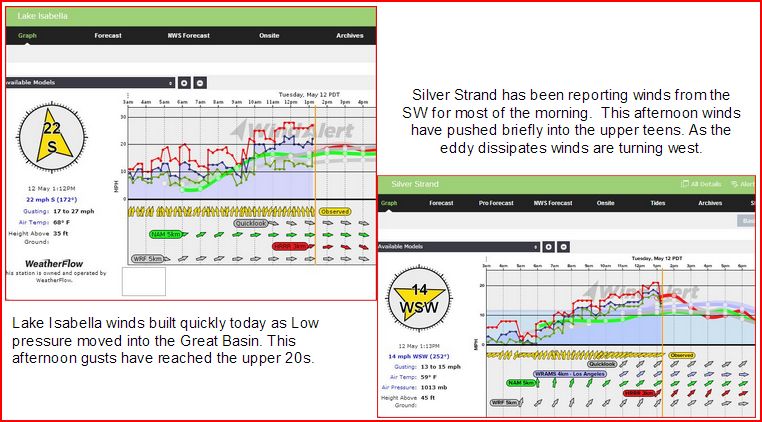