On Saturday, September 12, 2015, a friend of ours at iKitesurf named David Saunders had a kiteboarding accident on Kentucky Lake and was willing to share the story with us for educational purposes – very admirable I might add.

Here is where we are talking about as we zoom into the region.

There is a sliver of beach there along the tree line shadowed out in this frame, but enough to launch a kite in with shallow waters along the side.

“Yesterday afternoon I had a very serious kite lofting accident. We were flying 17m kites and the wind was low enough that we were having trouble staying upwind. As I went to shore to recover the kite I was hit buy a huge gust that instantly pulled me over 30ft in the air straight up. I kept flying the kite and was able to redirect out to the water. Unfortunately I hit in about 2ft of water, crashing feet, ass, head. Knocked goofy, I tried to release my CL, but immediately got lofted again. This time with no hands on the bar. I bashed through the trees and somehow ended up on the ground at the edge of the water. (Friends) Steve Flankey and Jaredan Braal were there to help me and call 911. From there, boated to an ambulance and Life Flighted to Vanderbilt. Broken left shoulder blade, 3, or 4 ribs. Fractured fibula, ankle, toe and a bone in my foot. The good news is nothing seems to be too messed up and should heal fine. Tomorrow morning they will decide whether or not to operate on my shoulder blade. (I’m hoping not). Bottom line, just a very bad time and location to be strapped to a big kite. Thanks so much to Jaredan and Steve as well as all the EMS that saved me. Sorry for the crazy news, but I will be fine.”

David also adds: “I was wearing an impact vest (which surely saved some injury). Also, I was not wearing a helmet and actually had one in my kite bag. I usually didn’t wear a helmet in light wind, but had started wearing one for jumping. I was very lucky only to have only 4 staples in my head with a small cut. I will wear my helmet all the time now.”

And good news as of a September 18th update – he will NOT need surgery after all. On to the road to recovery!

Now…let’s take a look at why this happened – and it’s not what you would think. After doing some research, I put together this video for that area on that day.

Here is an illustration of a gust front:

An animated version of an outflow boundary/gust front:

These gust fronts can and do travel hundreds of miles at times as they feed off of and overtake the lower cooler stable air with warmer air rising up ahead of them – or in this case – an area of cooler water for acceleration. Makes it that much harder to predict.

Here is the closest sensor from the exact spot.
Stilly Hollow sensor ~12-14 kilometers to the NE 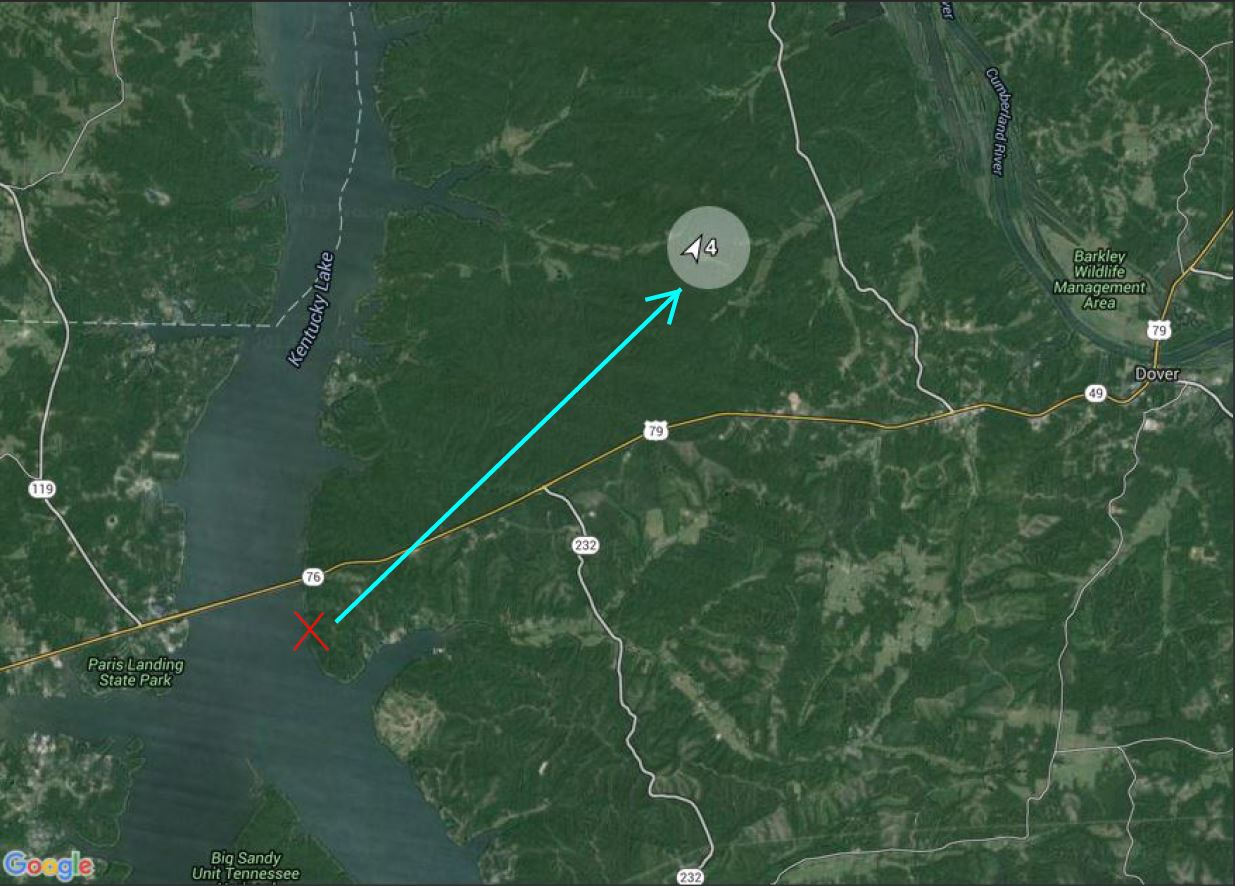 RECAP on the video: The sensor showed a spike in winds at 20kts just around 4:26PM. This sensor is up in the hills and land shadowed, so we can assume that the readings were lower than what occurred over the water.  By description of events, we may have been looking at 10-15kts higher than that with winds surging to 30-35kts, which on a 17 meter kite is highly overpowered and highly unmanageable.

And take a look at that 10 degree air temperature drop behind the gust front!

Here is a picture of the exact bank where it happened. I made edits according to the information available and how winds work along the elevated topography with a tree line. In this scenario, there were likely 2 eddies. The first one extending out over the water from the over-vertical hill tree line creating a vortex, then the second one from near the tops of the trees where the normal flow has nowhere else to go but up before transitioning back to inland. Even there…the air is still going up as inflow to the gust front. 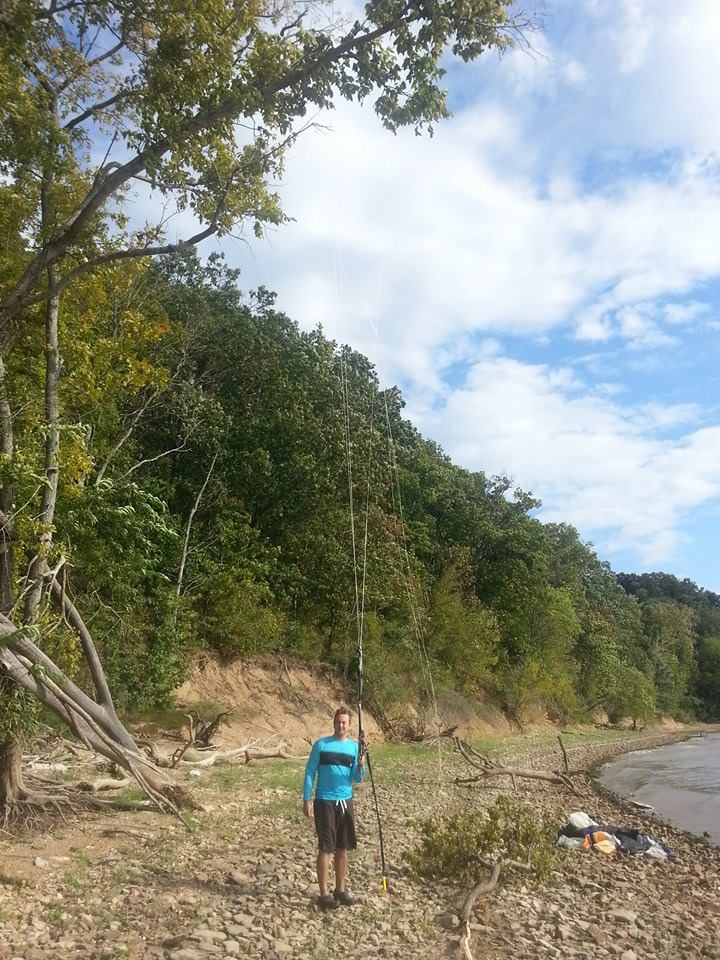 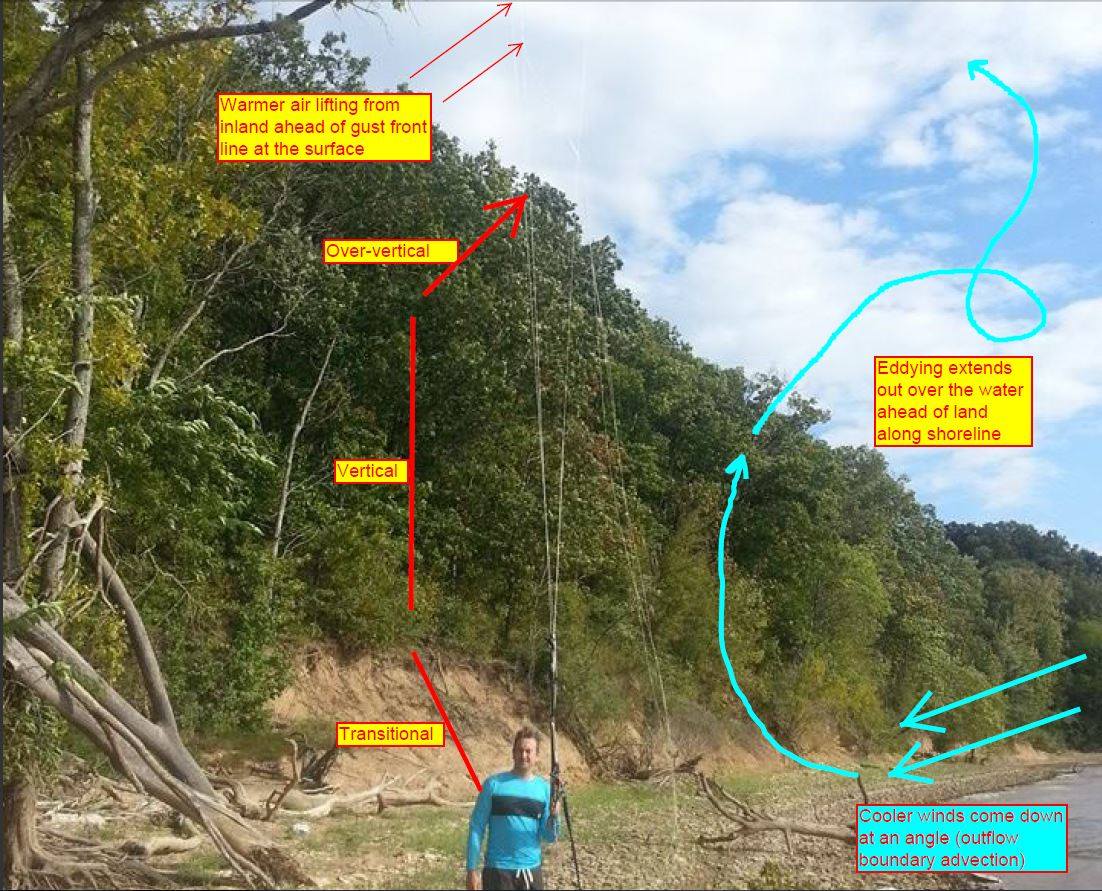 Here is a great .gif of what winds do when they approach mechanical transition..or an up-slope/ridge lift in topography. You can see where the lines squeeze together. That represents a “tightened gradient” where winds are accelerating as they lift. Add a vertical resistor such as a tree line with over-vertical branching…and you would get an eddy, or vortex, with further lifting ahead of it. Even though trees are porous and have open gaps, a large strong volume of air rushing in all at once can offset the absorption of the flow and stack up quickly.

There was so much force from his kite and body weight, it snapped a few stronger limbs off a tree. 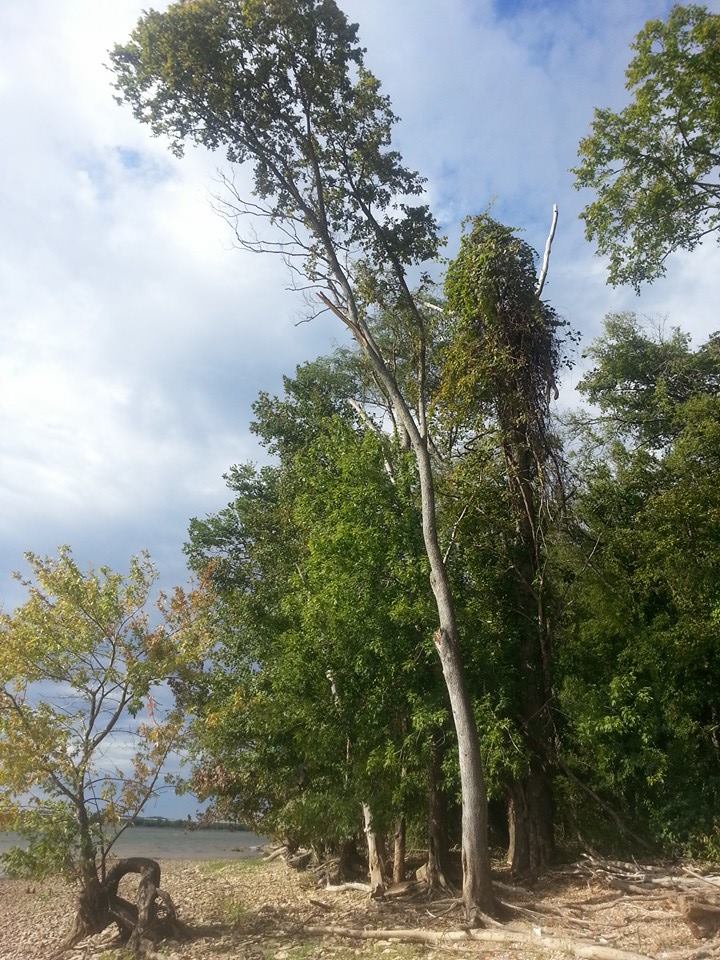 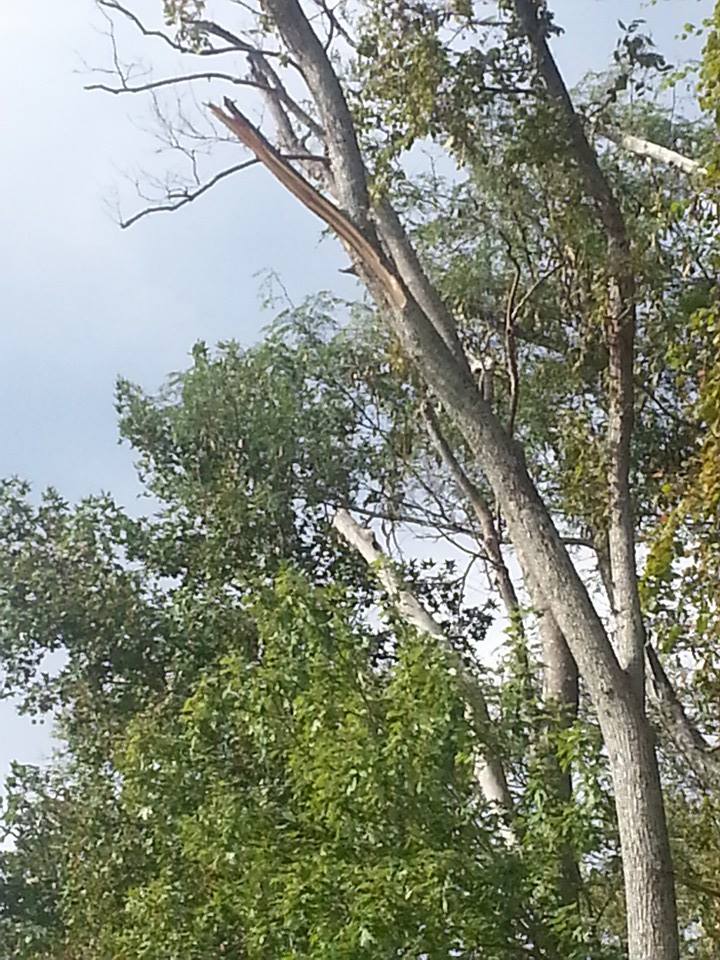 Friend and witness Steve Flankey took notes and talks about it: 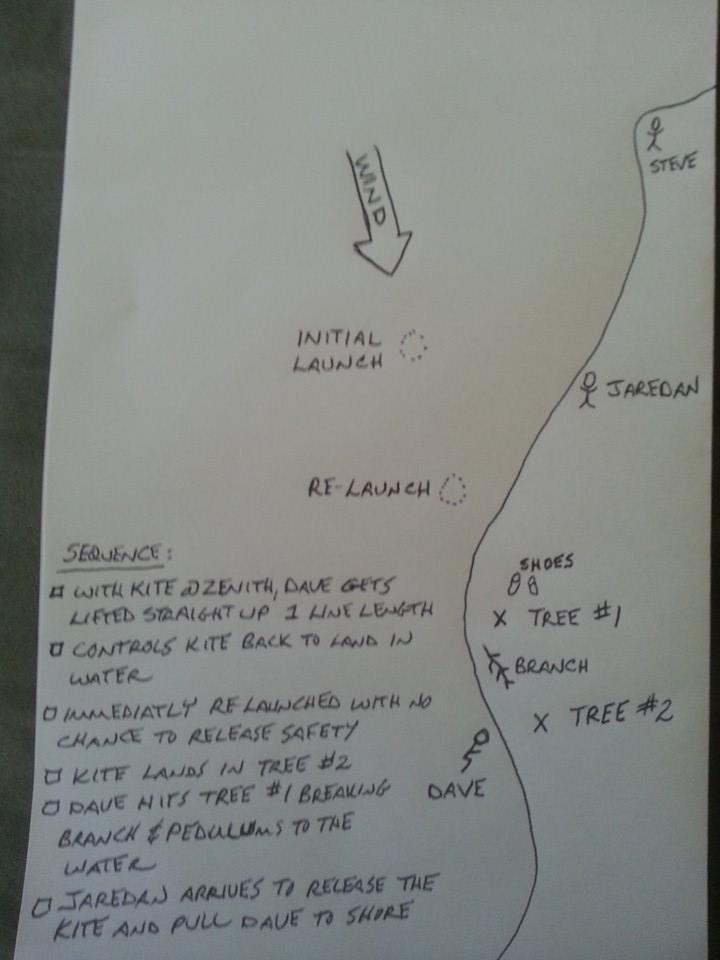 “What was so surprising was the speed at which Dave was lofted. He was sitting in the water and the kite was at the zenith too. He had no chance to release the chicken loop after the first landing (which he did an amazing job of keeping the kite under control). The kite lifted him back off the water at lighting speed. One last thing, Dave is being modest when he says he was at 30′. The first lift was approximately a full line length off the water. NO JOKE. Those are 27 meter lines too, I think. So glad Dave is such a skilled kiter.”

David furthers this in saying, “Even though I understand the obvious upflow created by the steep shoreline, I had not previously experienced it. Most of the time when we got too close to shore, we experienced turbulent, but lower wind as it seemed like the trees kind of absorbed it. Often times, the kite would simply drop when too close to shore, and occasionally experience a bit of a ‘swirly’.”

The story made also it into the local news at the Paris, TN “Post-Intelligencer” – article by Glenn Tanner:

WHAT TO LOOK FOR:  This happens more frequently than you would think all around the country  – and world for that matter. It’s knowing what to look for before heading out on the water or open area. irst thing is to check with the local US National Weather Service for any advisories, watches or warnings they may have put out for your area: http://www.weather.gov/ . Always check your regional area on radar to see if there are storms in the vicinity or on the way. Also…check the local winds and check winds elsewhere ahead of storming.  There are some visuals you can see with gust fronts, such as “roll clouds” or “shelf clouds”, but those may not present themselves every time. 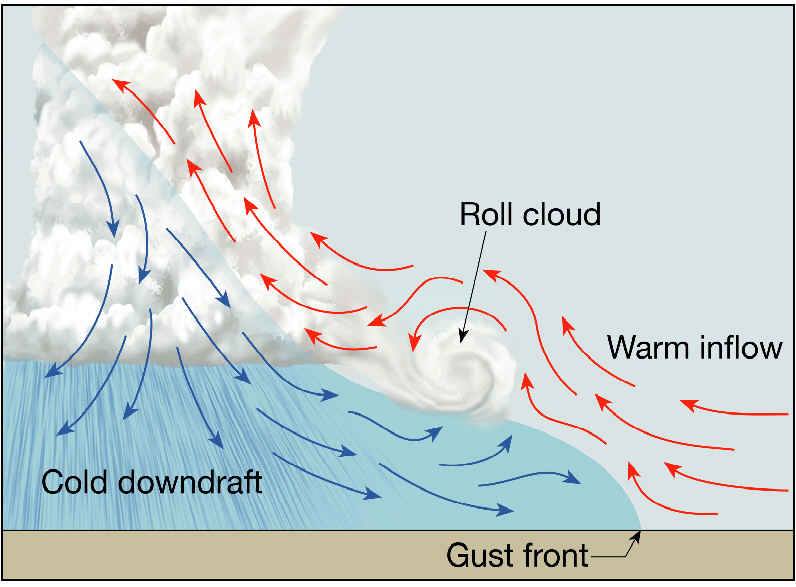 Here is a pic of a Roll Cloud. 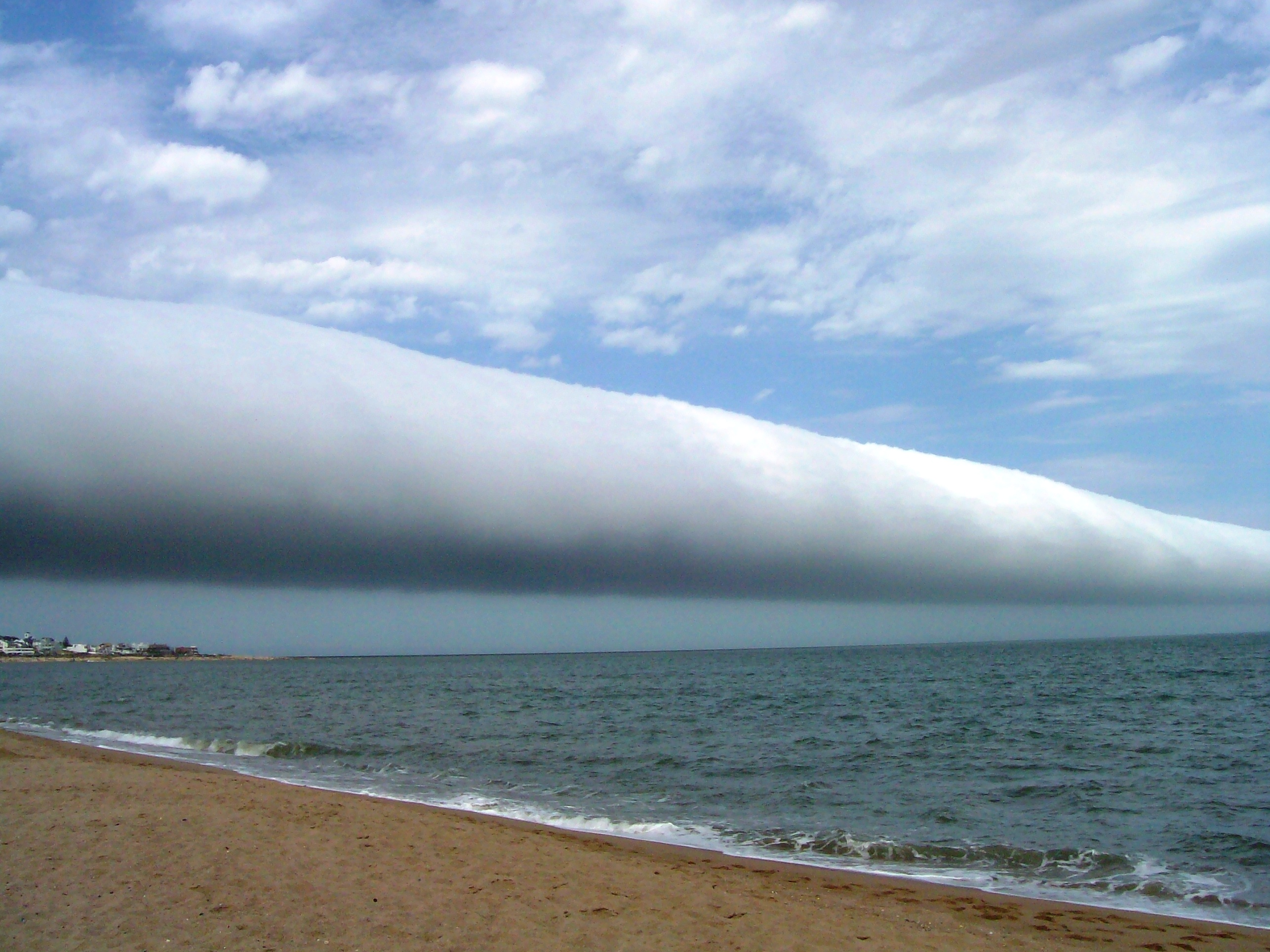 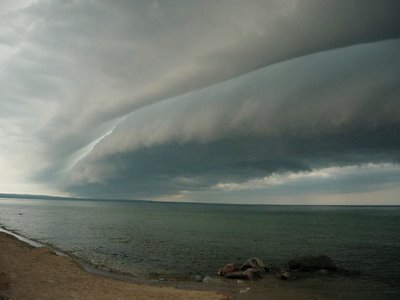 Other visuals or auditory/sensory forewarnings may include:

Not every weather station is trust worthy, so know your area well enough to decide what is good information and bad information. You don’t have to be a meteorologist to know the details of  inclement or dangerous weather when it is on the way, but knowing about storms and their associated outflow boundaries/gust fronts (as in this article) is very important in the world of wind sports.

We at WeatherFlow have a great set of tools available for wind/water sports enthusiasts and anyone else to use to help view the real time winds/radar and satellite imagery out there…along with many other features. You can actually setup any weather station in our entire network to “alert” you when winds come up to higher levels at your custom settings for directions and speeds.

These all have the same weather related tools of the trade, but differences in sports interests.  I used our professional product called Datascope for this blog since I was doing research, but it is available for professional enterprises – more about it here: http://www.weatherflow.com/data-and-application/professional-applications/datascope/

Going forward, we at WeatherFlow certainly hope that David heals fast and heals well. Although he is experienced as many are, there is always a chance that something out of the ordinary and unexpected occurs.   He is not the first one to have this happen   – and held himself together pretty well considering the first loft that would have sent most into panic mode.

As for the Kiteboarders of Kentucky Lake (and Tennessee) – if you are ever in that area and would like to check with the local first before riding, we highly recommend contacting them first before going out at  “Tennessee and Kentucky Kiteboarders”: https://www.facebook.com/groups/173153366119985/

Stay safe out there!