New NPH prepares to bully its way to the coast Wednesday but wind quality may suffer.

Today Wednesday Aug.12: The winds are picking up as forecast in the corridor but there are several issues that may limit the wind distribution and make for exceptionally up and down winds at some sites.

Looking at this new animation you can see that the North Pacific High has moved very close to the coast of the Pacific Northwest so the pressure gradients have gone up. However note the tiny low pressure right along the coast. The Gorge pressure gradient will not reach its full potential until this puppy fades.

Now watch as the animation jumps to ≈ 18,000 ft. feet. See the counter-clockwise spinning Cut-Off Low way aloft? Watch carefully and you can visualize how it is picking up warm moist air from above the Southern California waters and pumps it towards the Gorge. As this air hits the Cascades it lifts, cools and the moisture condenses as patches of unstable clouds. Since this air is relatively unstable it may cause the winds to be very gusty. Also if we see clouds masses out east they may limit the warming of the Basin and the pressure gradients east of the corridor may not climb as much as we would hope for today.

From yesterday Tuesday Aug.11: At this point you are probably wondering what is wrong with the Gorge wind machine. What is with the many listless, hazy days with the threat of thunderstorms? There has always been periods of low winds in the Gorge for decades. However in the past the causes were local to regional conditions  like cool temps in the Columbian Basin or the North Pacific High’s isobars moving a hundred miles west of the coast or just a simple heat wave that sent the Basin low pressure over the Gorge.

Normally in the summer the North Pacific High’s isobars hang near the west coast creating coast winds and making the strong pressure gradient over the Gorge to the Basin that drives our winds. It is normal for the NPH to get jostled several hundred miles to the south by passing upper trough at ≈ 18,000 ft. then it quickly bounces back to near the coast. Hence our winds wax and wane. But what we are now seeing is not historically normal.

The get a handle on what is happening take a look at this animation and find the “old North Pacific High” Historically this is the wrong location for the NPH. A week ago the NPH was off the Pacific Northwest and was bringing wind to the Gorge. But several days ago a passing upper trough shoved the NPH to Southern California waters. Meanwhile surface low pressure storm systems filled into the waters normally occupied by the North Pacific High. You can see the counter-clockwise spinning winds from 2 of these low pressure in this model animation and if you look at today’s satellite imagery they are readily visible. Note the moist southerly flow coming from these systems heading towards the 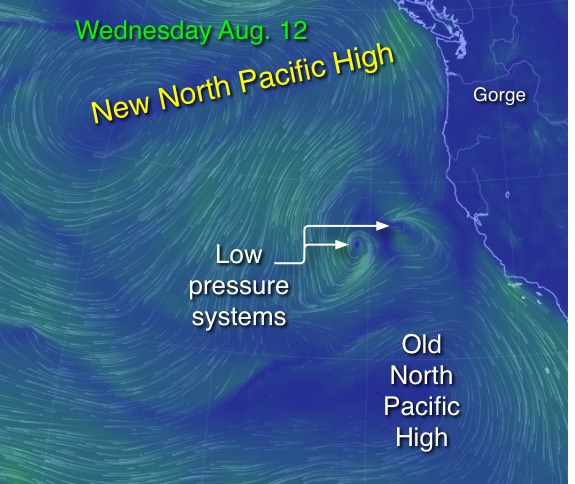 Gorge. That is the source of the clouds and T storm threat.

Now look way to the west of the low pressure systems. See the “New NPH” that has formed. In 25 years of forecasting for the west coast I  rarely saw this pattern of old and new summertime North Pacific Highs forming. Now it is common place.

Wednesday the good news is in the second imager. Note how this “new NPH” will lurch from the position you see in the animation all the way to our coast tomorrow so the pressure gradient and the winds will ramp up Wednesday.

The image also shows the bad news: the low pressure system will drop just a little to the south and will continue to pump moisture over the Gorge so there will be a threat of wind robbing thunderstorms. The North Pacific High is just one part of the Gorge wind equation. If these clouds are in the wrong place they will rob the surface of the heating that is the second part of the wind equation. If that happens the wind may be locally unreliable.