As we have had a cold winter climate here in the SE Region this year, our waters chilled down into the upper 40’s/lower 50’s and have remained cool between the 58-62 degree mark into the spring, with recent readings more current today, April 10, at ~ 63.5 degrees.   With air temps on the rise and very slow warming of the our cooler shelf waters, we are seeing marine boundary layers develop just along shore to cause inconsistency to builds for immediate beaches. Even with an Atlantic High firmly in place, diurnal Seabreeze circulations have been limited in strength along the shoreline with MBL forming to limit elevations as cool air remains stabilized at the surface. The Gulf Stream 40-50 miles out has held stronger flows over the warmer water currents and as we get towards the cooler shelf waters, we see the layer form.

I will be looking at the Charleston area in particular during the dates April 2-4 for this topic as the stretch of Southerly flow lasted for several days. From April 2nd – April 4th, we had a fairly stationary Atlantic High parked to our SE that slowly drifted to the ENE until Saturday’s front pulled through. Each day, Charleston Harbor speeds at our Fort Sumter Range Front Light sensor showed elevations in periods to upper teens/low 20’s during afternoon builds as winds funneled in through the harbor mouth… but 10kts to low teens with UP’s and DOWN’s prevailed along immediate beaches Wed and Thursday with brief late afternoon pulses. Higher numbers showed inland over warmer land to low 20’s and gusts to around upper 20’s with turbulent quality. Friday showed the highest in the period with inland troughing interacting with Atlantic High to increase the gradient along the coast.  Also to note that there was less decoupling each night, eventually giving way to short periods of stronger flow to beaches during the inversions in the early AM hours- mainly between 2:00am – 5:00am…with longer periods of elevations in the harbor.

We called it well in our Daily Briefings by having less confidence than the computer models were showing, thus increasing our own forecast confidence with discussion of marine layering effects and making manual adjustment to tables.

–> Climate Summary and Tide Table for other influences…. keep in mind the relative humidity and timing of the ebbing tide.  The Marine Boundary Layer (MBL) increasing its own humidity level is not shown since the NWS local summaries come from well inland over drier land. We can assume that levels were higher shore-side as thin layering was visible to the eye. Low tide suggests a possible pattern with higher numbers showing during roughly near those times…due to possible tidal flushing with warm water plumage providing a warmer top layer to increase sea surface temps for a slightly better mixing profile each day. 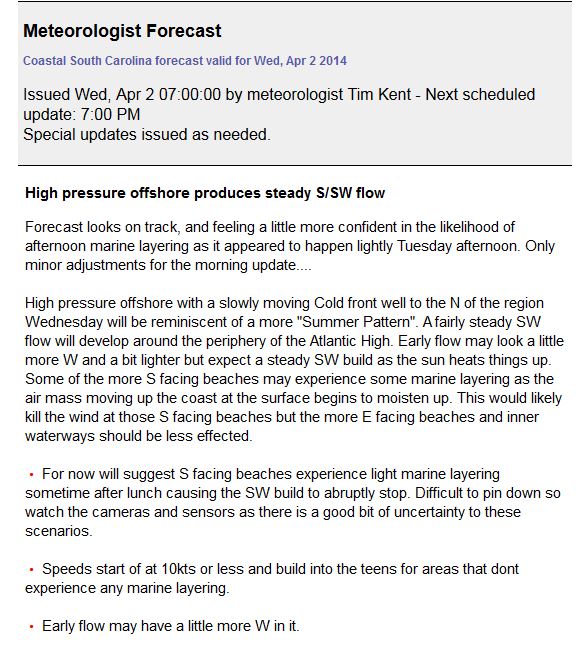 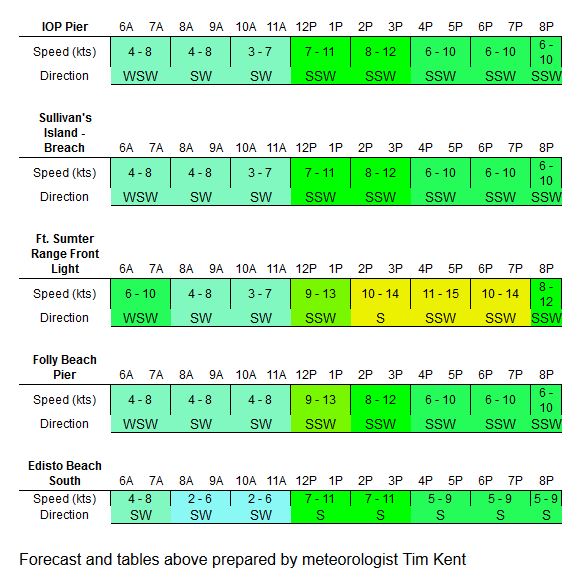 Fort Sumter graph in the Chas Harbor…notice the afternoon build on the Southerly turn. 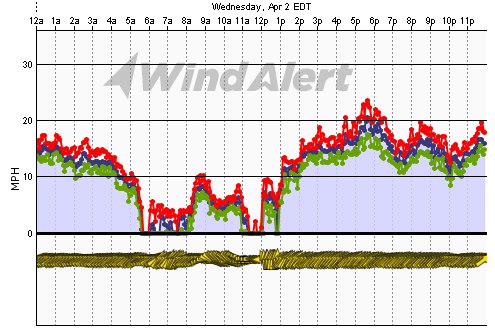 Here is the graph from Folly Pier…notice the pressure drops by 3mb’s with Seabreeze circs. 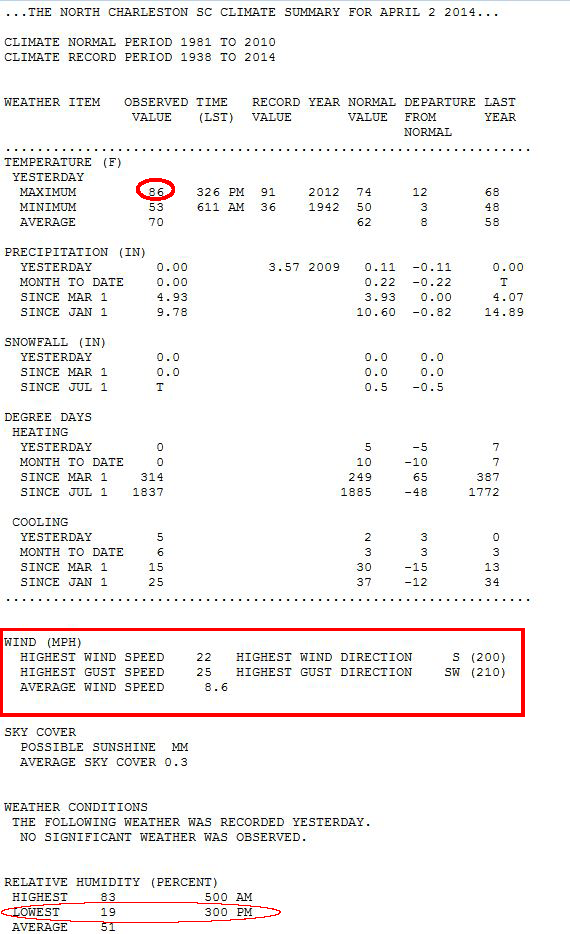 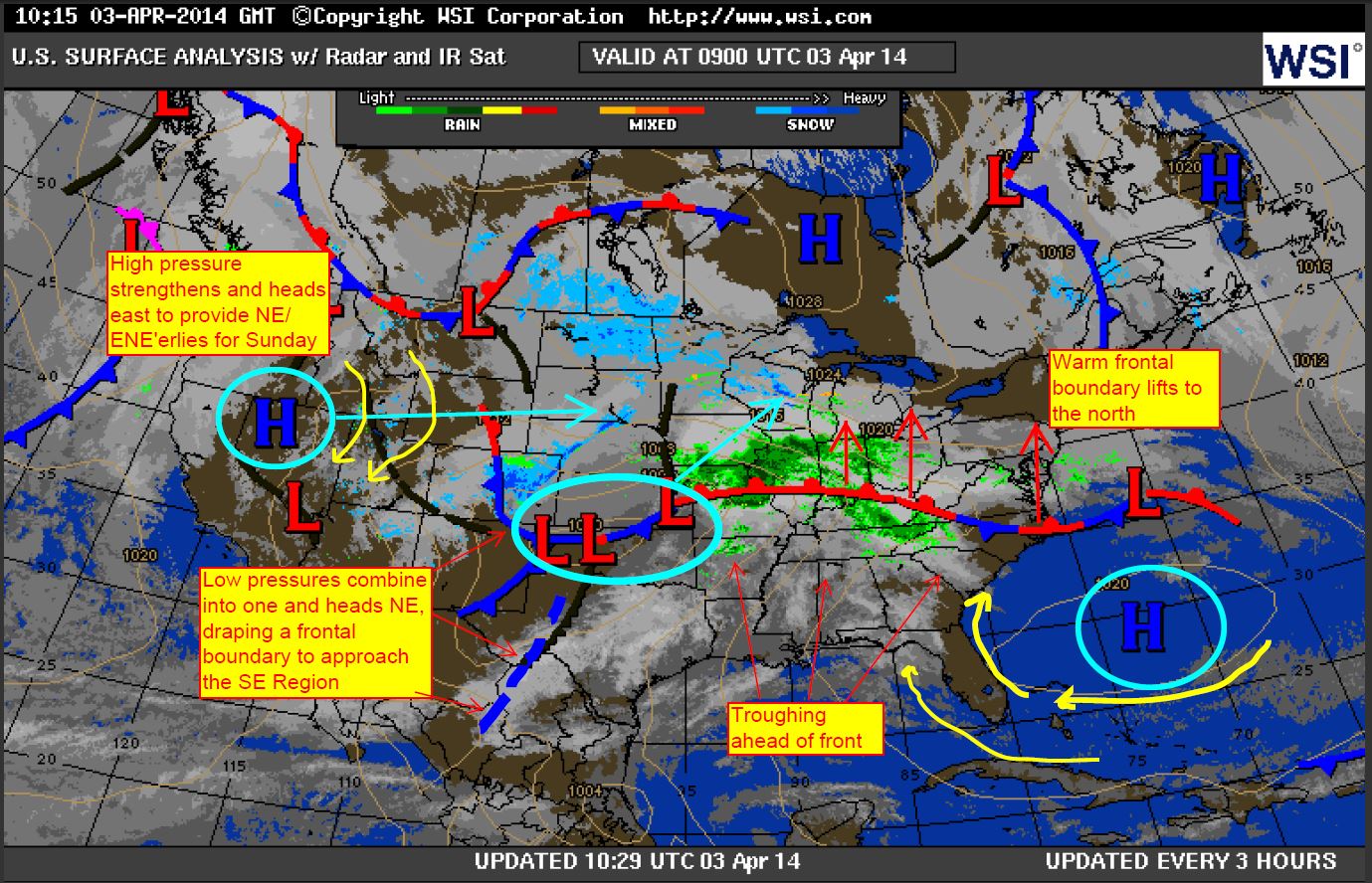 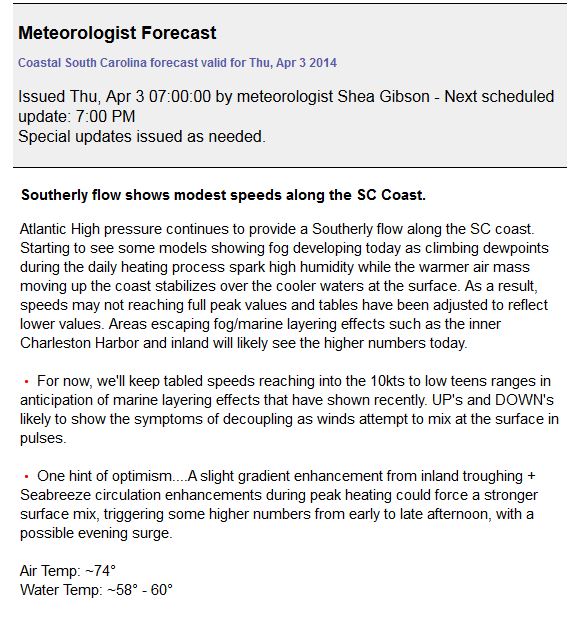 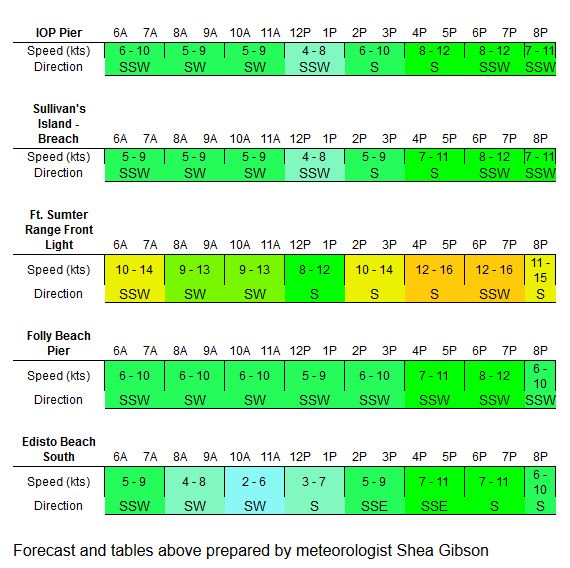 Notice the early AM elevations, the late morning/midday flatline and then the steady afternoon increase.

Could be associated with the late inversion land breezing finally giving way to the Seabreeze? 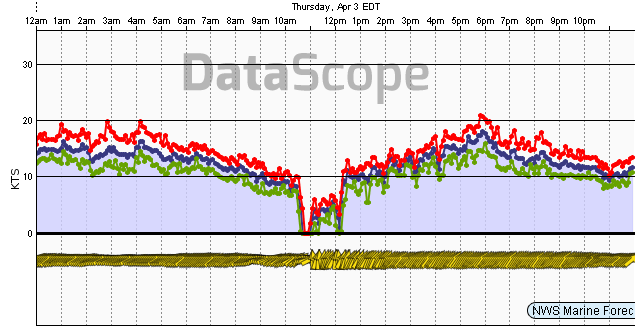 Isle of Palms Pier   – same thing here around 10:30am with Seabreeze picking up the flow again. 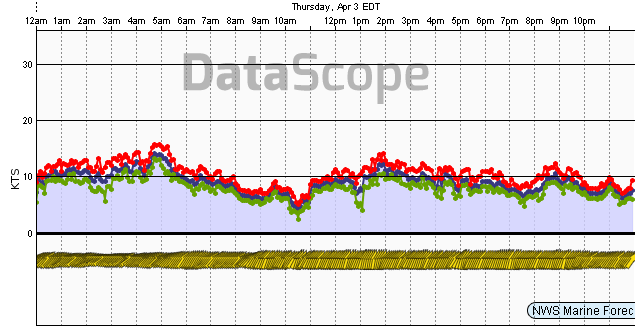 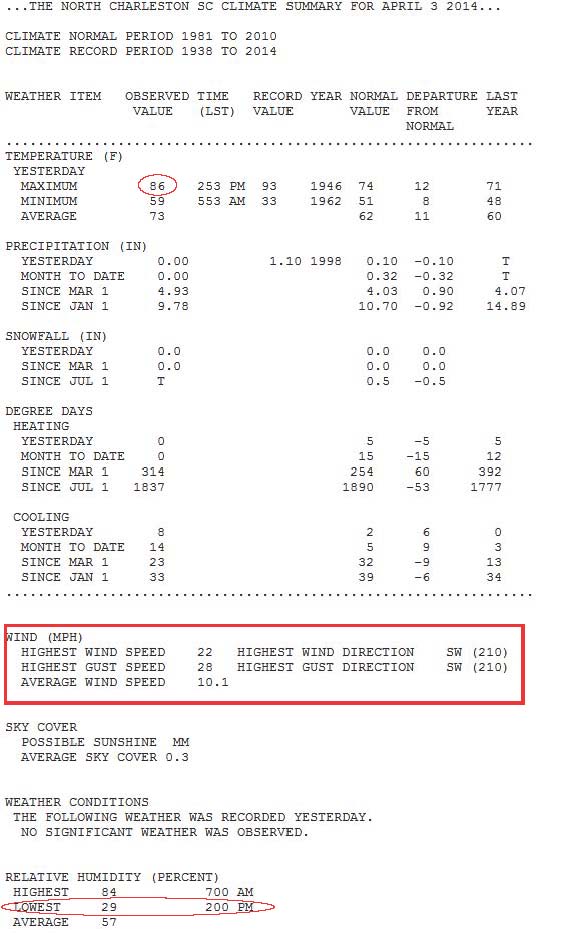 Inland toughing produced a moderate gradient build to the area, with mid-level strata and some lower level debris fanning out towards the ocean and dissipating as it reach out over the waters. Isle of Palms to the north saw first beach elevations as clouding approached there first. Folly Beach came later as troughing pressed southwards.  Notice during early AM hours how the inversion showed less decoupling issues even with higher humidity at 90% inland with a probability of being somewhat lower at ~80-90% along beaches. 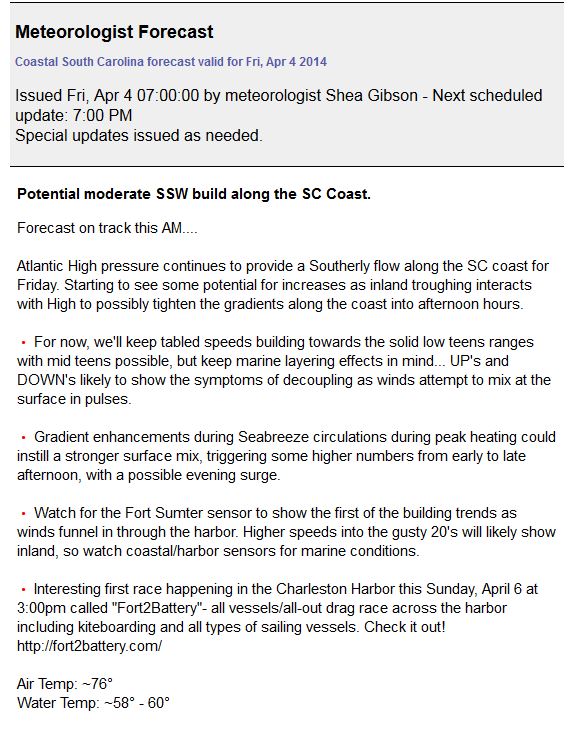 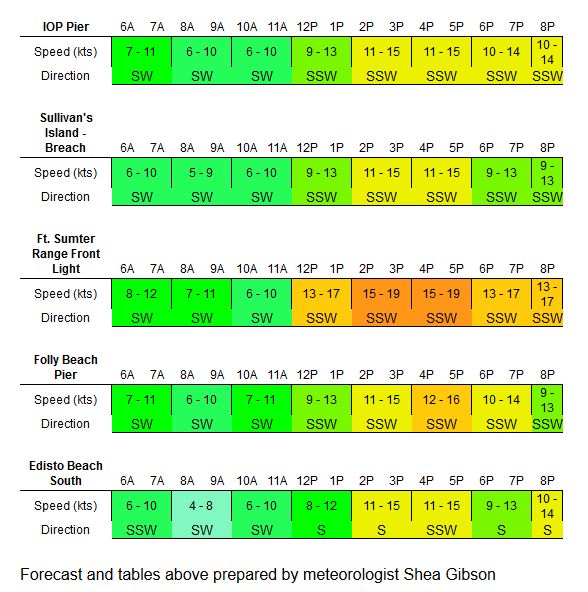 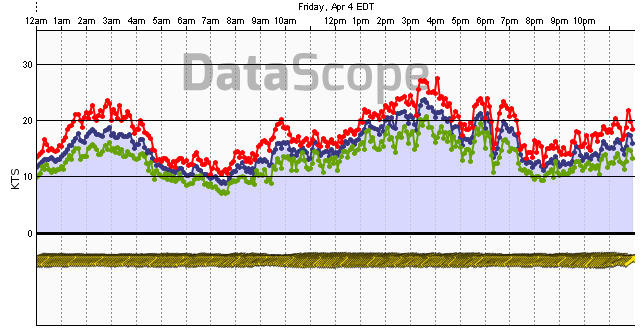 Picture taken at 11:30AM of mid level strata from inland trough encroachment (you can see winds laying down marsh grasses in the water along the SW inland builds)…location Cosgrove Bridge, ~10.5 miles inland. 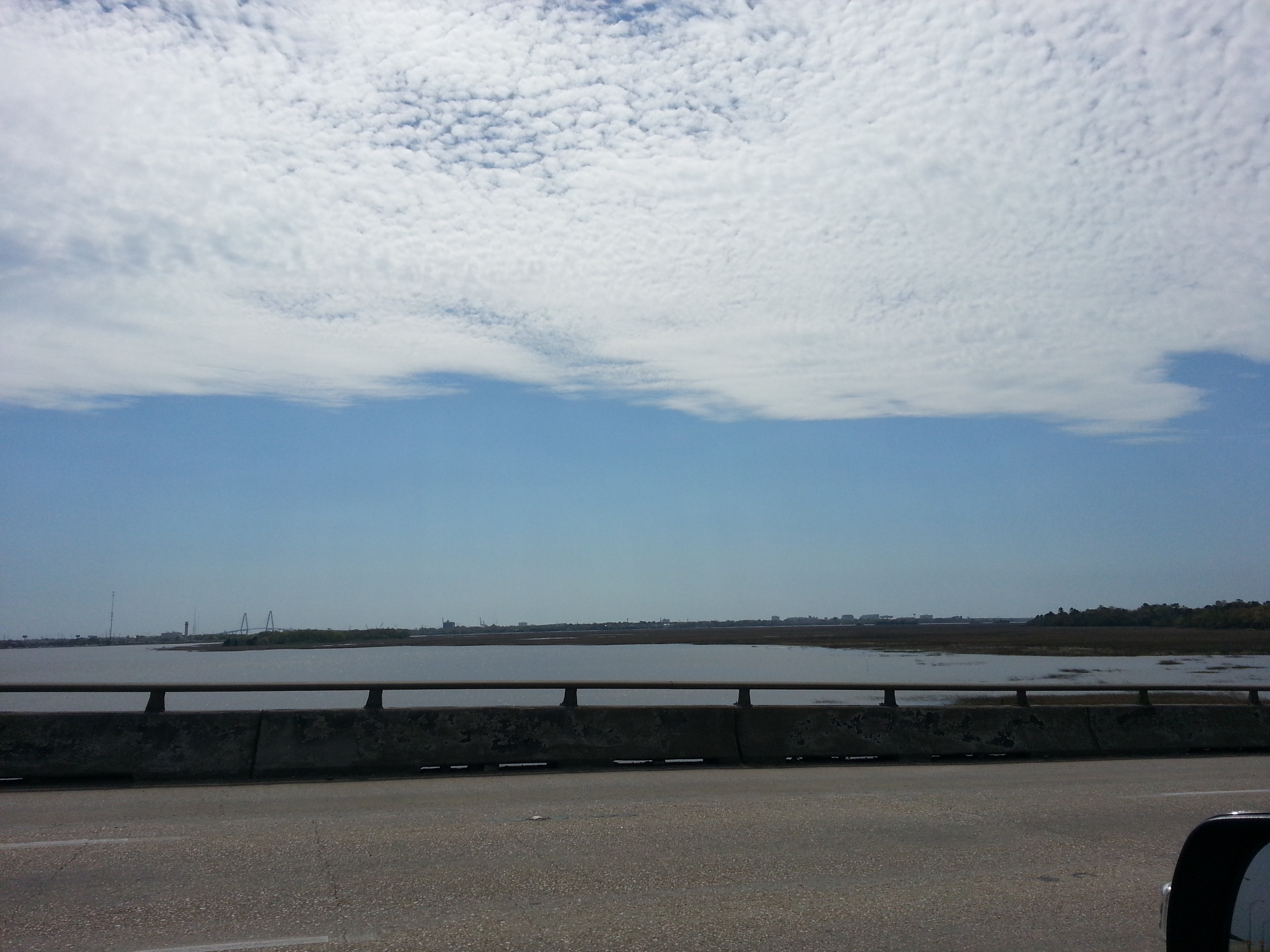 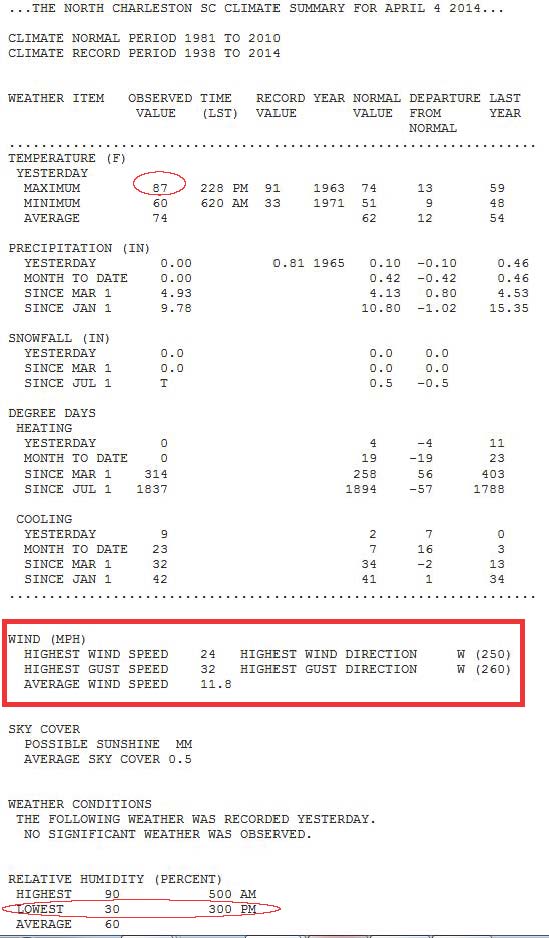 With water temps slowly coming up and beginning signs of the Bermuda High blocking pattern, we should see marine layering effects start to wear off – especially as SST’s surpass the 80° mark.  Subtropical ridging could still show weakening of the Seabreeze pattern with axis placements over the SE coast causing hazy conditions with more stable air, higher humidities, and greater chance for fogging inland/along beaches during early morning hours.