“Marine Surge Alert” are words loved by those who ply the waters of Treasure Island, Berkeley, Pt. Isabel and foremost Sherman Island since it means strong foggy wind blasting through the Golden Gate.

Yet coast and most Peninsula sailors dread hearing about marine surges since Coyote and 3rd. Ave. become unreliable in in SW wind conditions. But paradoxically Palo Alto often enjoys at least upper teens NW wind during a marine surge. How can this site have NW wind when the overall wind picture from near Southern California to Bodega Bay is SW wind? 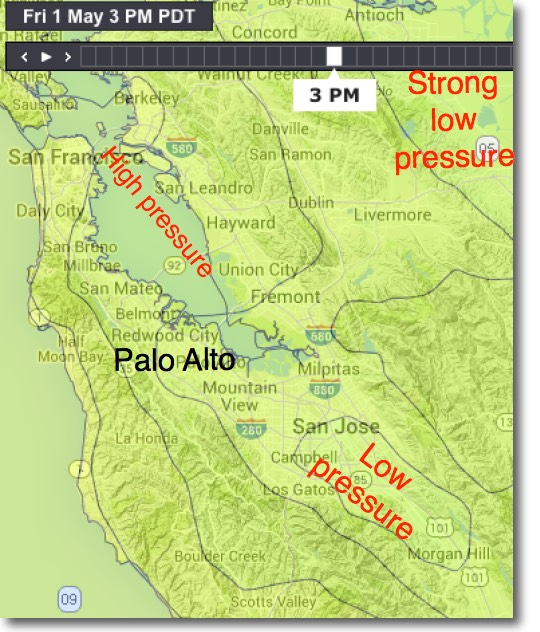 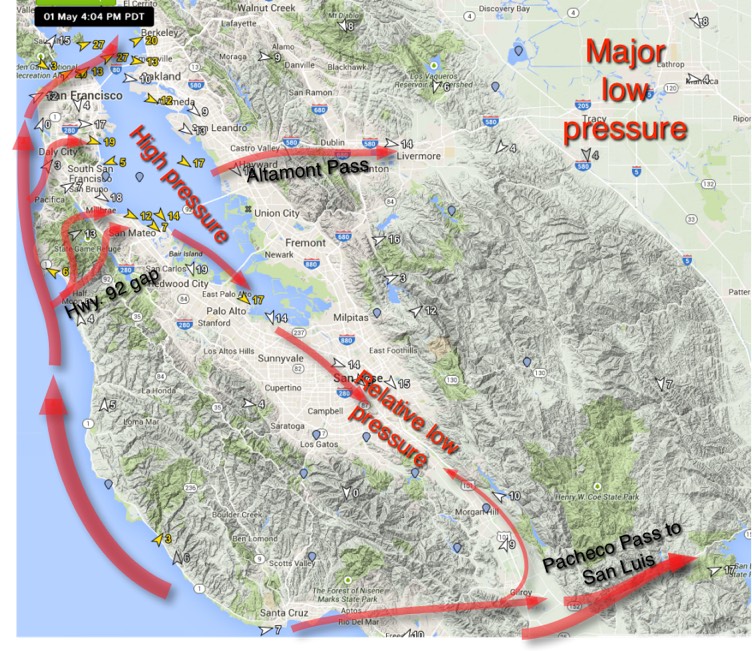 First scroll down to the bottom and watch the May 3, 2015 marine surge zoom of the Central California coast towards the Bay Area.

But look at the most southern part of the bay and note that when the marine surge hits the Candlestick to 3rd. Ave sensors turn NNW. This is weird since the marine surge has SW winds on the ocean and SW to WSW winds after entering the Golden Gate.

To explore this paradox we have to remember that the air within the marine surge is much cooler and denser than the air over the bay in the AM. So as this foggy cool mass enters the bay it creates a relative high pressure zone over the bay waters.

You can see this in the isobars in the top image. First note the isobars showing relative high pressure over the Bay Area waters. Now look southward. The flat lands south of San Jose are typically warmer than rest of the bay since the Santa Cruz mountains isolate them from much of
the cooling effect of the marine layer. And the dense urban and suburban development holds more heat than the surrounding plant covered hills. Looking at the isobars you can see  there is  a relative low pressure south of San Jose compared to the air over the bay waters during a marine surge.

This means there is a North to South pressure gradient over the Peninsula waters during a SW marine surge.

Now dropping to the second image notice the large red arrows over the ocean. These represent the SW marine surge wind. Notice how they push though the Golden Gate and curve towards the East Bay then Sherman Island.

But things get tricky in the Peninsula. Notice at the bottom of the graphic how some of this marine surge wind slips past SantaCruz and heads up the Pacheco Pass heading towards San Luis Reservoir. But note how a trickle of this wind feels the pressure gradient to San Jose and heads that way.

Moving to the middle of the graphic notice how some of the SW wind slides through the Hwy. 92 gap in the Santa Cruz mountains. Some of this wind may hit the 3rd. shoreline creating those
unreliable SW shifts and lulls that are the bane of 3rd. Ave. kiters during a marine surge. But the build of the SW flow goes through the Stick to Flying Tigers area. There it feels the pressure gradient to the San Jose area and the Central Valley. Some of this air turns west and shoots through the Altamont Pass to the Central Valley while some of the wind turns more NW to even NNW creating an eddy heading towards Palo Alto (hence my phrase the Palo Alto Eddy). This provides Palo Alto with upper teens NW wind as the air moves towards the high pressure over San Jose.

So if you kite or sail on the Peninsula and can not make the long drive to Sherman Island consider checking out Hayward, Flying Tigers or Palo Alto… tide permitting.