Monsoons are for the South Pacific, right?

Blog.WeatherFlow.com > California & Baja > Monsoons are for the South Pacific, right?
By Benjamin Miller

So, we’ve all heard about the monsoons that bring flooding rains to the South Pacific and southeast Asia.  But that’s it, right?  Monsoons don’t impact the U.S., do they?  Well, that depends upon how you define monsoons.  Traditionally, we like to define monsoon as “a seasonal reversing wind accompanied by corresponding changes in precipitation.”  So, in short, the Southwest and even Pacific Northwest are, at times, impacted by monsoonal flow in summer.  Well, if you live in southern California or Arizona you’ve probably heard about this.  But just how does monsoonal flow get set up? 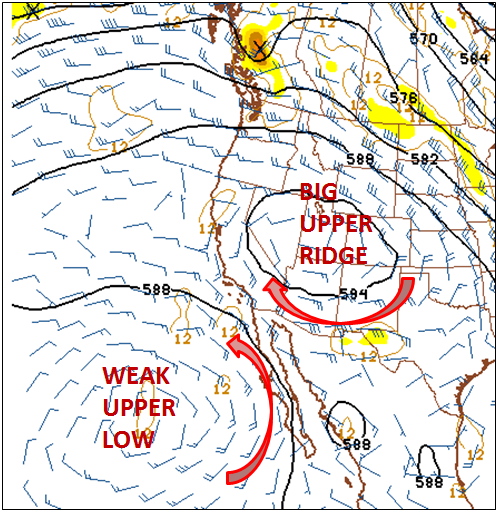 It all starts when there is a big high pressure ridge over the Great Basin. This upper high pressure ridge continues to lift and expand northward. Now, this helps pack the heat across much of the West. Meanwhile, as it does this, the upper flow over northern Baja California, southern Arizona, and southern California turns E to SE. This flow, known as monsoonal flow, begins to tap into mid and upper level moisture from the Gulf of California or even from the Gulf of Mexico. (In one noteworthy case a couple of years ago subtropical moisture from the remnants of a tropical storm that hit far south Texas and Tamaulipas, Mexico migrated westward enough to get drawn into the established monsoonal flow. The result was pretty heavy rains for New Mexico, Arizona, and southern California.)

Now, as shown in the image, the current monsoonal flow setup is being reinforced by a vague upper low well off the southern California coast. This helps pump in subtropical moisture as well. The result is that convective clouds build over the deserts and mountains and thunderstorms can form on a daily basis.

Typically, the coast is pretty unaffected by the monsoonal flow. The easterly winds are more aloft and may impact the deserts and mountains. The monsoonal rains and thunderstorms often don’t push west of the coastal mountain ranges. In fact, the strong upper ridge often helps to shrink and strengthen the 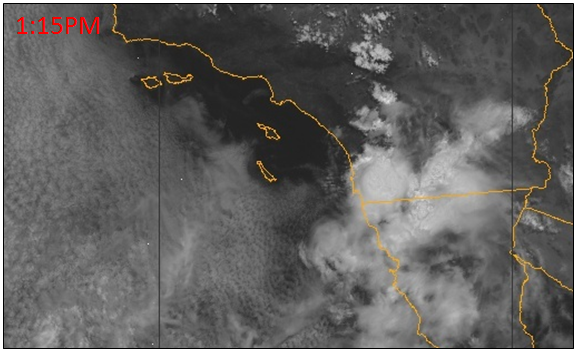 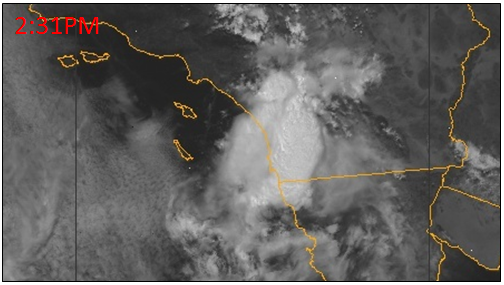 marine layer. This results in a shallow, but well formed marine layer that burns off slowly. For beaches near San Diego, sea breeze winds tend to struggle in these monsoonal patterns. This is because the NW flow across the southern California bight is absent and the beaches must rely solely on the mild sea breezes to drive afternoon winds. Since the immediate coast remains cool under the shallow inversion, these winds are generally unimpressive. (NOTE: The sea breeze winds for sites around L.A., Ventura, and Santa Barbara can often be healthier during this pattern.)

But, what happens when the monsoonal thunderstorms push over the coastal mountains and march right to the coast? Well, check out these satellite images from Tuesday, June 30th.

By midday the developing storm system pushes over the mountains, moving westward as monsoonal storms do, and begins pushing toward the coast. By 2:30PM a strong line of thunderstorms has developed and begins to push past the coast. These storms wipe out the marine layer inversion and bring heavy showers and thunderstorms to San Diego County.

As mentioned above, monsoonal flow often has little direct impact on the coast winds. But in this case, just how did the monsoonal storms impact winds around San Diego? Check this out! All WeatherFlow sites around San Diego saw a spike in the winds as the storm front pushed through. The strongest recorded wind spike was a Mission Bay North Jetty, reaching a sustained NNW wind of 40 mph and a max gust to 45 mph! 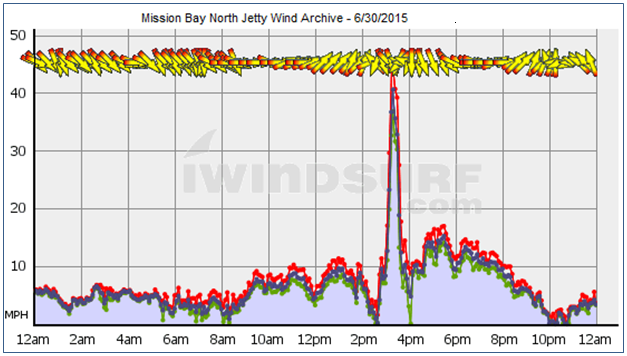