Battle between the NPH’s NNW and NNE winds… 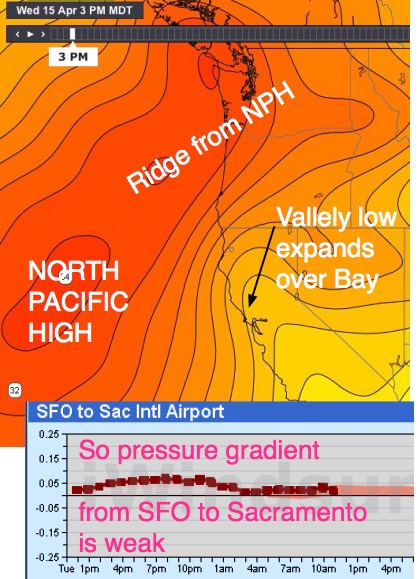 While the Gorge sees beautiful warm weather but no wind.

Typically when the iwindsurf.com forecast mentions a ridge from the NPH and NW ocean winds but NNE winds aloft over the bay only weak winds are forecast for the Bay Area. Today, April 15, should be an exception to that rule.

But first let’s talk about ridges and where the NNE wind come from. Looking a the first image find the NPH. Usually in the spring the NPH is round to oval in shape and spans the waters between California and Hawaii. But often after a period of strong NW wind on the coast this mountain of high pressure air pushes an extension or ridge into far Northern California and even into the Pacific Northwest.

Looking at these isobars you can see this ridge making such an extension. Also notice how as the NPH elongates the isobars show low pressure extending from the Central Valley over the Bay Area.

The video in the next image shows the wind flow pattern that develops as the North Pacific High ridge forms.

First notice the clockwise spinning winds of the NPH. Normally this flow creates NW winds along the Northern California coast.

Now check out the ridge from the NPH extending towards Oregon and Washington.

Then notice near the Bay Area how the North Pacific High’s normal surface NW winds turn more NNW when a ridge forms. If you look at the ocean buoys sensors on a day like today you will see that they are NNW.

Can you see how it will be harder for NNW wind to fill into the Bay Area compared to NW wind?

Also looking carefully you can see that there are northerly winds in the Central Valley.

In the next close up video let’s examine those NNW to NNE winds more carefully. Find the Golden Gate in the middle left of the image. and the NNW ocean winds.

Then look to the north of the Bay Area and see the NNW to NNE flow in the North Bay and Central Valley. Now zoom your
visual image to the San Pablo Bay north of the Central Bay and see how the  this flow will try to keep the NNW wind from curving into the bay.

keeps the winds inside the bay weak, late and mostly from Treasure Island westward.

Today however the NW winds are usually strong and there is a chance that at upper teens to weak low 20’s wind will reach at least the Treasure Island to 3rd strip. And I would not rule out some

wind reaching Berkeley. Incidentally Sherman Island sees wind in this pattern but it is typically too NNW to be useful. In this bottom image we can see how the models forecast for today. Look carefully and you can see the wind battle as the day progresses.

Basically today the NW wind overcomes the NNE wind and much of the bay sees decent winds.

However tomorrow, Thursday, I expect the ridge to push much further into the Pacific Northwest so the North Pacific High’s winds go even more Northerly, the SFO-SAC pressure gradient  weakens even more and the NNE winds keep most of the NW wind out to see. So we see lighter, later and weaker winds mostly from Treasure Island westward. And the looking at the top image you can see that are almost no isobars along the Gorge so calm and clear there.