What the hell is a ridge?

Blog.WeatherFlow.com > California & Baja > What the hell is a ridge?

Whatever it is the ridge will impact the wind and weather in the Bay Area, the Gorge, Southern California and even Baja today.

Today the Bay Area some sites will see mild upper teens wind at best, Southern California will have morning offshore gusts reaching into 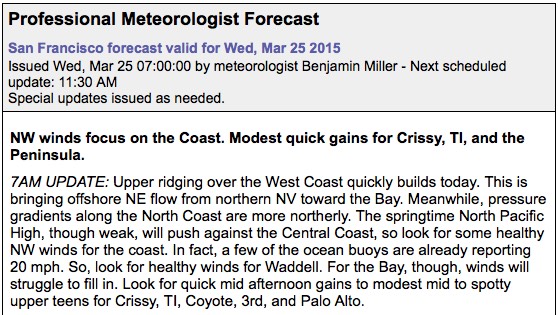 the upper 40’s on the ridge tops but afternoon sees upper teen onshore winds, Baja has El Norte wind but it will never reach La Ventana and the Gorge, rainy today, will have sunny warm weather tomorrow. To most people these events seem totally unrelated but in reality they are all triggered by the same event: The North Pacific High, aided by upper level flow, is extending a ridge into the Pacific Northwest and the Great Basin.

What the hell is a ridge?

Take a look at Ben’s Bay Area forecast for today. Notice the mention of ridging and NE flow. All the time on the news and in our forecasts you hear the word ridge but for most of us it is unclear what the term means. Here is a simple way of thinking about ridges. You know how mountains often have rocky ridges that extend from the mountain peak? Well you can envision the North Pacific High as a huge mountain of high pressure that wanders the waters between the west coast and Hawaii. Look at the next image and note the isobars. First find the “mountain” of the North Pacific High then follow the numbers on my diagram.

1.When this NPH “mountain” moves closer to the west coast it brings NW winds to the Bay Area and the Southern California outer waters and northerly wind to the Pacific Northwest coast. 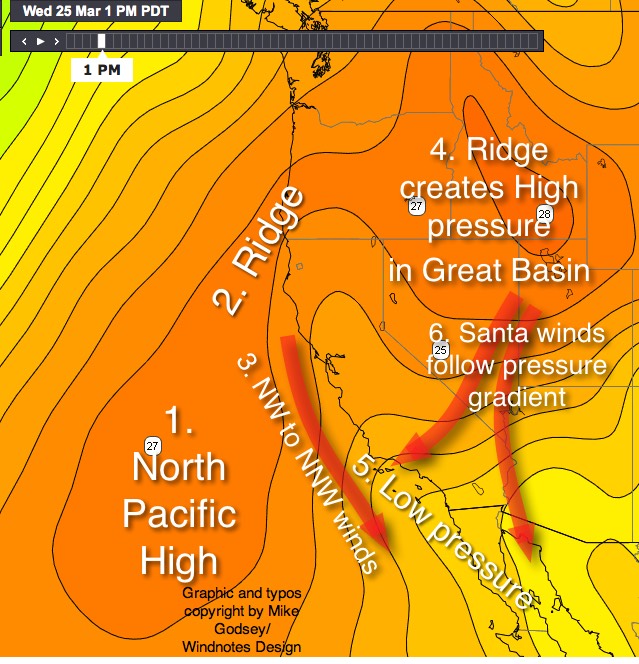 2. Often a few day after this happens the upper level winds cause the NPH to elongate with part of it being shoved over far Northern California forming a Ridge.

3. This process distorts the shape of the NPH’s isobars so the Bay Area winds go from NW to more NNW. And the winds just aloft go NE.

4. Sometimes the ridge from the NPH is carried all the way into the Great Basin creating  high pressure there. And tomorrow this high pressure expands over the Gorge so the rains stop and warm sunny conditions develop.

5. At the same time low pressure often moves over the California coast from Southern California to the Bay Area. So now we have high pressure in the Great Basin  and low pressure just offshore. In the Bay Area this means light AM North to NE winds. Which in turn causes the Central Valley thermal low to expand over the coast which, as you can see in the next graph, results in a weak pressure

When you have Santa Ana winds in Southern California you often have El Norte wind in Baja’s East Cape. But when the

NPH is so close to the Baja coast the NW wind often blocks the North “El Norte” winds. You can see this in the animation below.

Now looking at the animation of the winds this morning try to find all the above in the wind flow patterns.

Can you figure out why the North Pacific High’s surface winds are so clear over the ocean but so locally so weak or strong over the land?

And why is Ben’s forecast saying that Waddell will see some wind but the winds will struggle to fill into sites further inland?

Bonus question: Who do the NE winds in the Bay Area and the Santa Ana winds in Southern California both fade away in the afternoon?

Send your thoughts to mike@iwindsurf.com