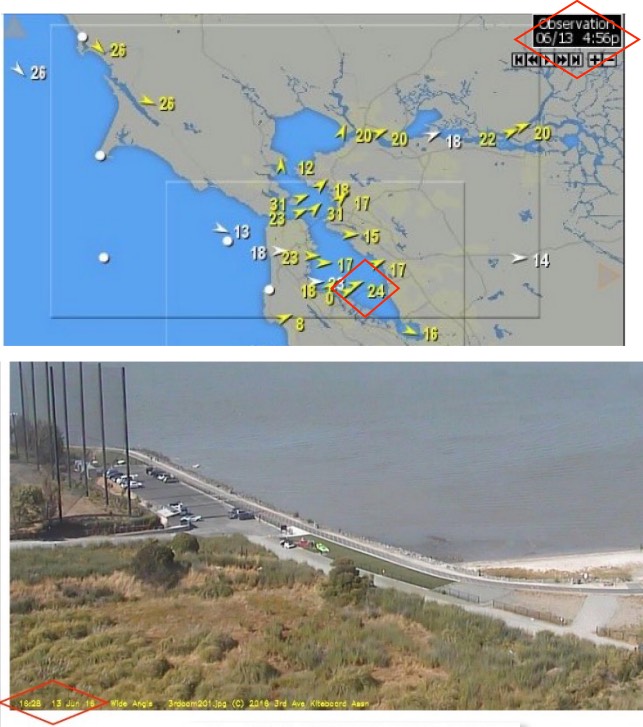 Take a look at the wind graph to the right for June 13.  The channel sensor is blowing 24 knots at 4:56 PM so you would expect hoards of kiters and windsurfers on the waters and rigging in the parking lot. But the cam image below the wind graph shows both the lot and the waters are calm.

This is a pattern we  have seen over and over this June and early July. I think most would agree that this is the worse season, so far,  in decades for the Coast and Coyote and 3rd. Ave. Yet paradoxically the waters north of the Bay Bridge have had one of the best seasons in years.

We always expect there to be brief periods when the  wind is  crappy for some part of the greater Bay Area but this long period of worst and best winds is unprecedented.

And as Coyote and 3rd. Ave. regulars know our forecasts for inside have also often been crappy as we and the models struggle to figure out this abnormal pattern.

In Part One of this 2 part blog I will give you the big synoptic picture of why we have seen almost endless southerly eddy flow on the coast and in the Coyote and 3rd. Ave. area.

Then in Part Two, later in the week, will cover the super micro scale of the 3rd. Convergence Zone and the Palo Alto eddy. This should give you some insight as to why the winds inside at Coyote and 3rd. Ave. have been so weird and why they are so hard to forecast.

Looking at the next image first find the North Pacific High. Then notice the extension or ridge from the NPH that extends towards the Pacific Northwest and Canada. These ridges commonly form as storm systems pass by to the north. Most of June there was an unending parade of such storms so the NPH frequently had such a ridge.

Notice how the winds in the ridge area are N to NNW as they reach California. As you know the Northern California coast mostly has NW wind in the early summer but this June NNW winds prevailed due to the common appearance of the ridge.

This NNW flow encourages eddies to form in both the Bay Area and in Southern California. In the Bay Area the eddy can range from a tiny Golden Gate Eddy in the waters between Pt. Reyes and Pacifica or it can huge and span the waters from Bodega  to past Half Moon Bay. Either way the eddies create southerly flow along the coast  despite the strong NNW wind west of our ocean buoys.

While such eddies form several times a month in the summer they typically die about mid day as does the southerly ocean wind. But this June the eddies were often jazzed up by southerly upper level winds or low pressure towards Redding or by increases NNW flow due to the unusual early season of tropical storms to the far south.

This southerly flow is good news for sites north of the Bay Bridge since the wind coming through the Muir Gap in Marin and the Golden Gate is less inclined to curve to the south so more of it makes a turn northward at the Golden Gate and Point Blunt heading into the North and East Bay.

But on the Peninsula the Hwy. 92 gap, which faces to the SW, funnels those eddy winds towards the Coyote and 3rd. Ave. launches. At the same time southerly eddy wind hits the San Bruno Gap where it curves towards the low pressure in the Central Valley via the Altamont and Hwy. 84 passes and San Jose plains as NNW to NW wind. And, as we will see in Part Two later this week, that causes problems for Coyote and 3rd. Ave. near shore.

The next animation shows the NPH ridge and the NNW flow and the eddies from June 30 to today July 6. Notice each day how the ridge creates NNW flow and how eddies form near the Bay Area and Southern California.

Then today, July 6, the wind goes more NW as the ridge fades. As I type this at 12:22PM on July 6 there is still faint signs of an eddy and Half Moon Bay and Coyote and 3rd. Ave. have SW wind. But we have a much better chance than recent days of having WNW wind at or near the launch site.