Piedmont Trough increases the Sea Breeze along the SC/NC coast 5/27/14.

Tuesday, May 27 showed an interesting setup with lee-side troughing converging with piedmont trough that developed during diurnal heating. The mid state areas, with their respective sandhills and clays/loams, gave rise to mid state circulations that enhanced the gradient during Sea Breezing.

A dual core High started the day out, with center of High sitting just over southern GA to provide a westerly zonal flow to SC/NC. This allowed troughing from upstate to converge with mid state heat/moisture and spark off cumulative areas of thunderstorms across the midlands to march eastwards, resulting in solid return flow for the Sea Breeze to pick up along the coast. Besides Folly Beach holding elevation through the typical morning inversion, other areas showed increases off the nocturnal jet fade and then pick back up after the transition – with many areas picking up quite a bit sooner due to the enhanced gradient.

Here is the surface analysis map I edited from the 26th, which shows an inland high along northwestern GA that slowly drifted towards the south into the 27th. This allowed for a west–>east flow aloft to push troughing eastwards. 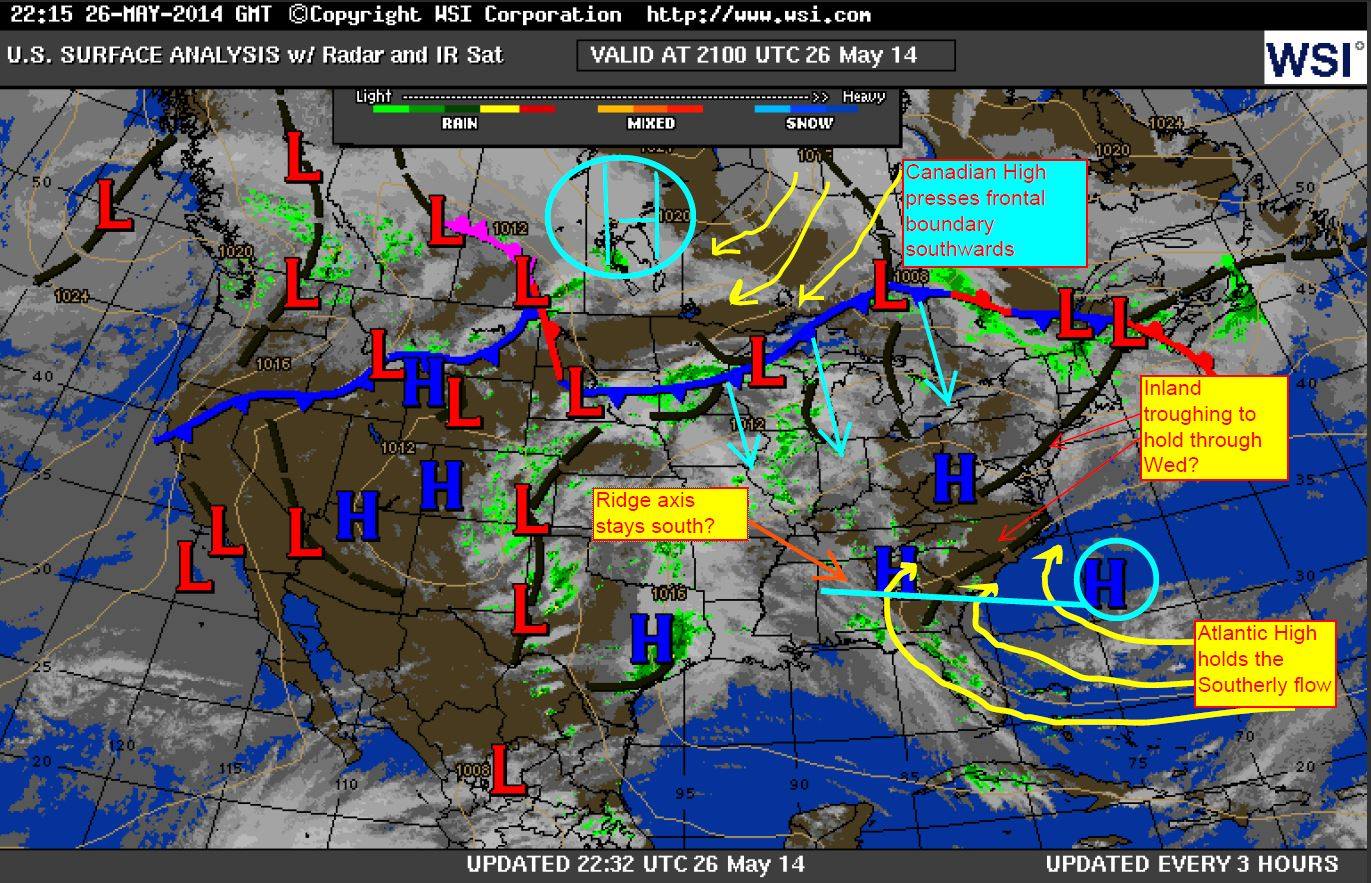 Here is the surface analysis from the morning of the 27th, showing that High sliding to south GA with winds turning W/WNW inland with convergence at the mid state.  The semi-robust High in the Atlantic provided enough dry air along coastal SC/NC to get things kicked off but had a ridge axis south into GA. 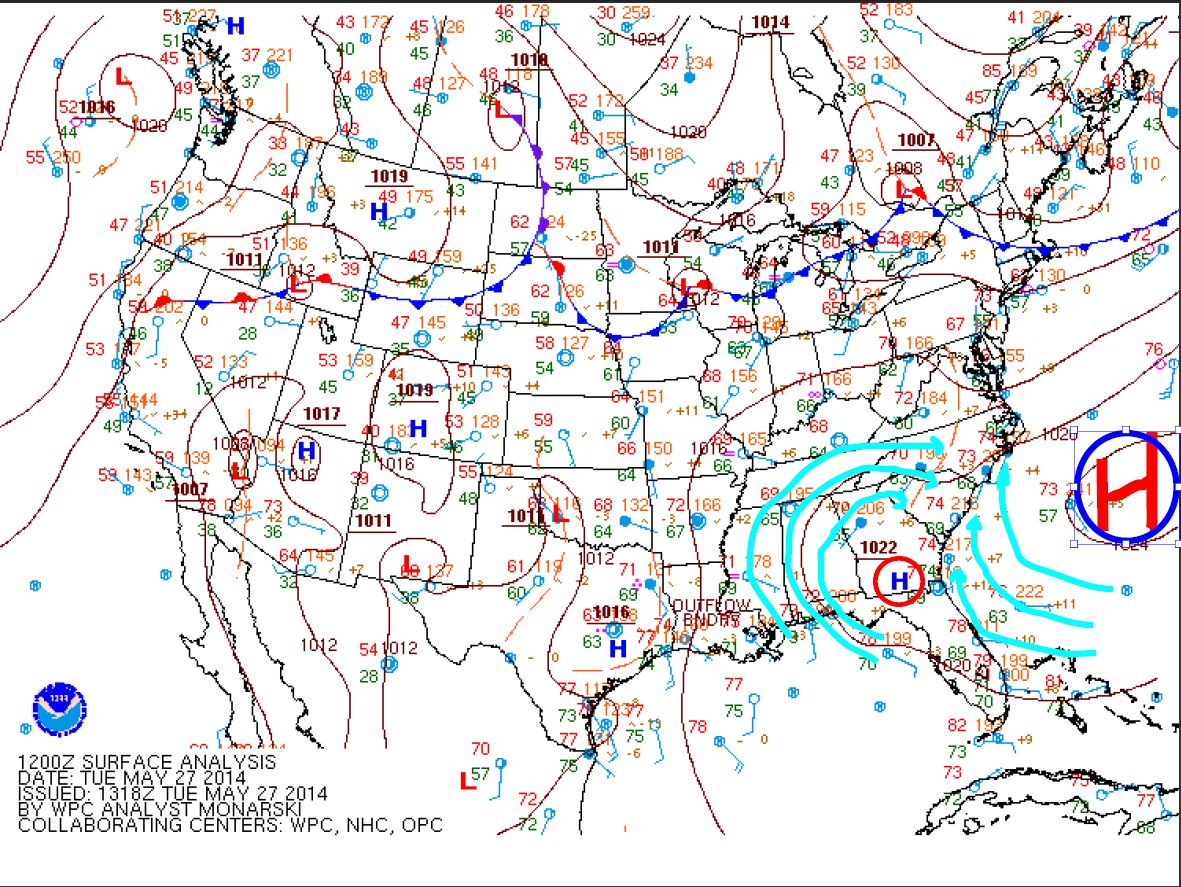 Here is the 0.5 reflectivity radar showing that batch of storms clinging to coastal GA just at or below the ridge axis  – likely intersecting the retrograding High to the south. 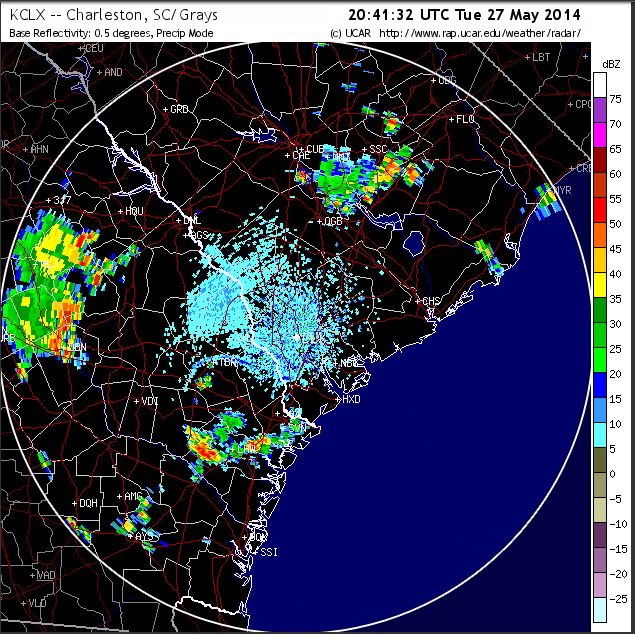 Lots of typical moisture scatter, but you can see where the bulk of convective activities developed earlier in the day as regional radar shows the developments from upstate blossoming in the mid-state across GA/SC/NC. (Might be interesting to see the soil temps in those areas during those convective outbreaks) 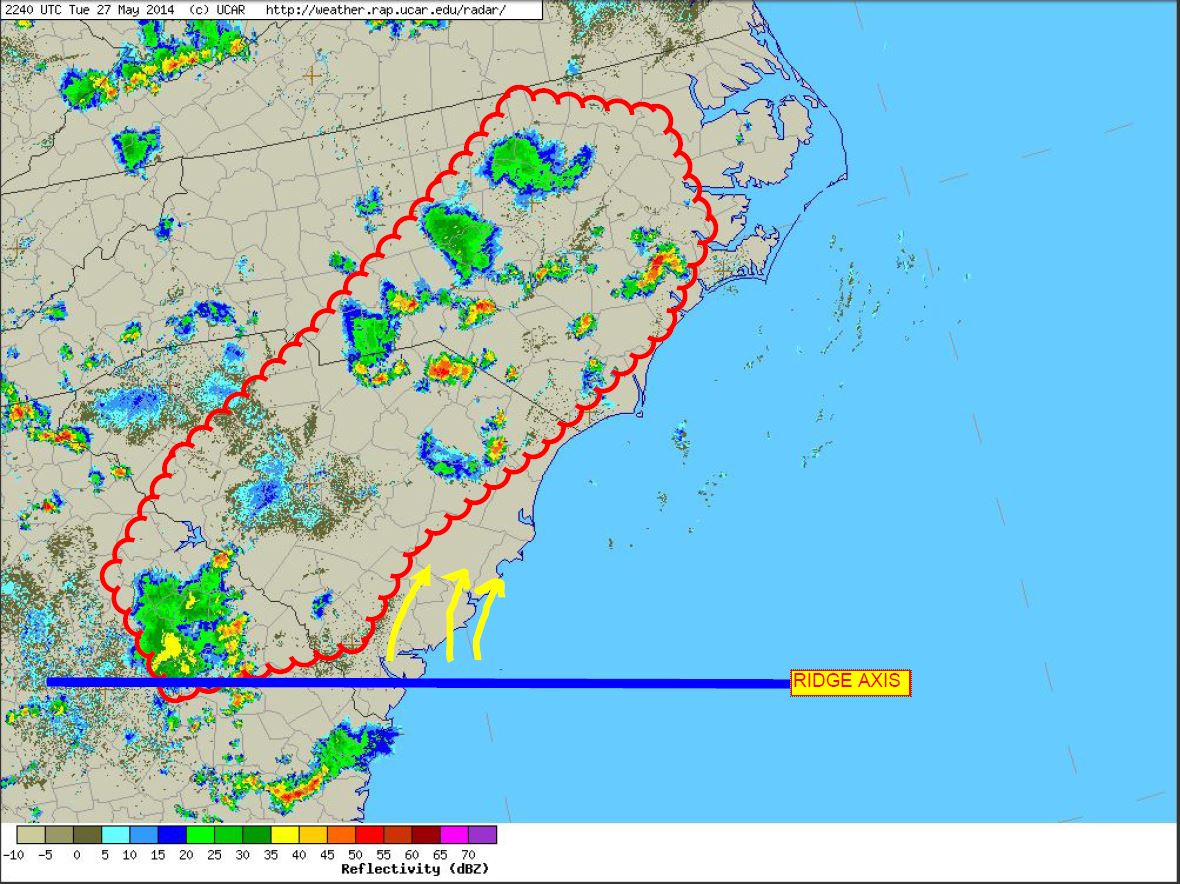 Another quick look at SC radar around 4:00pm EDT shows storms making to northern coastal SC and flaring up near Columbia. 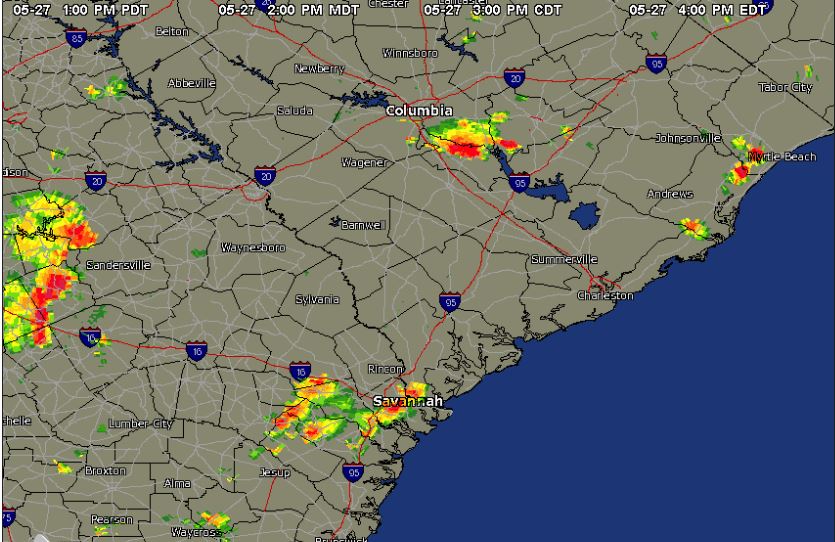 SO…here is the forecast for SENC/SC-  well done by Tom Allen, who went with a moderately to strongly building Sea Breeze.  Timing differed where gradients allowed for earlier increases, but overall got very close on the peak averages. 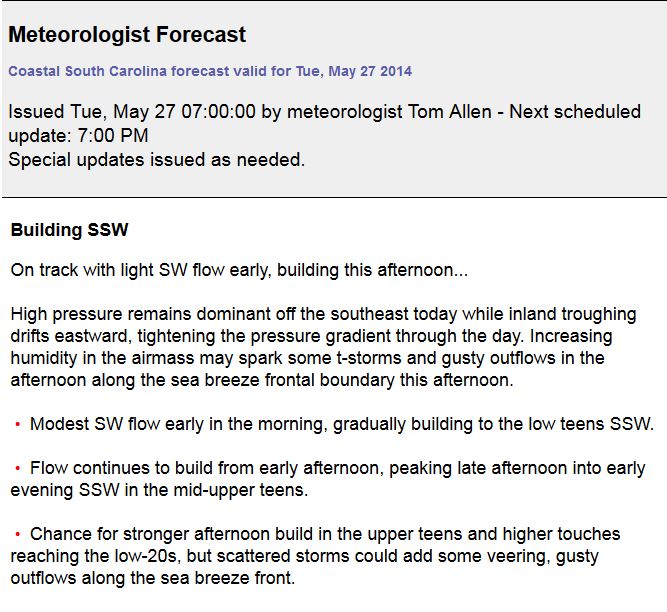 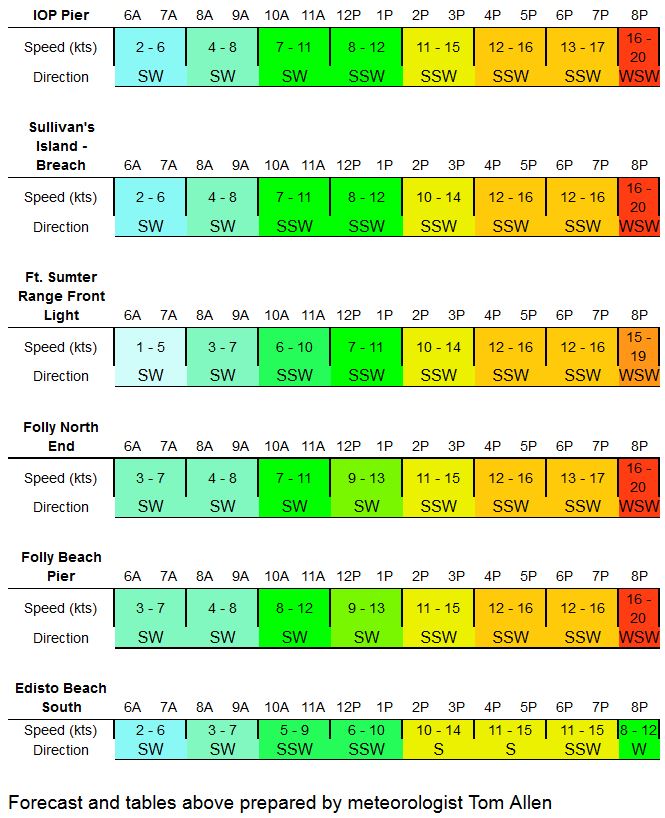 And the graph from Isle of Palms, SC (note the 4mb pressure drop) 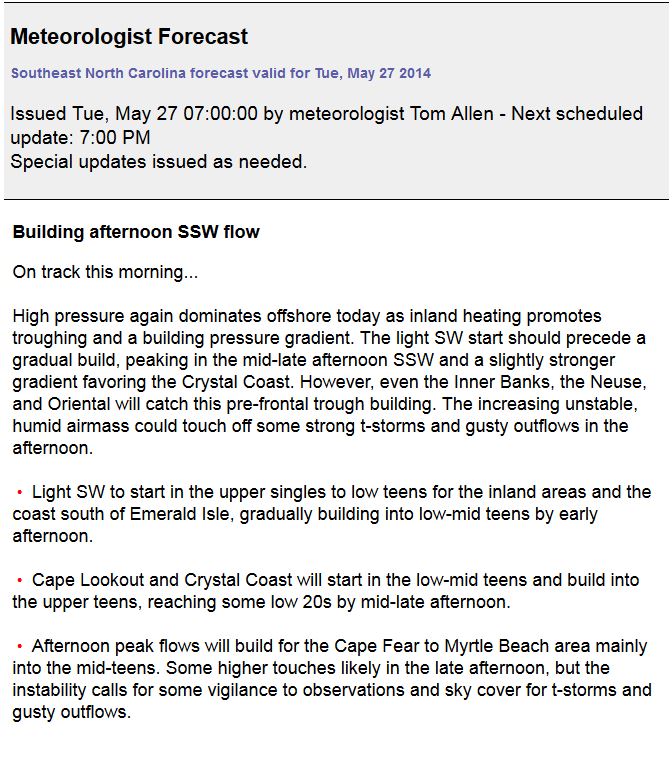 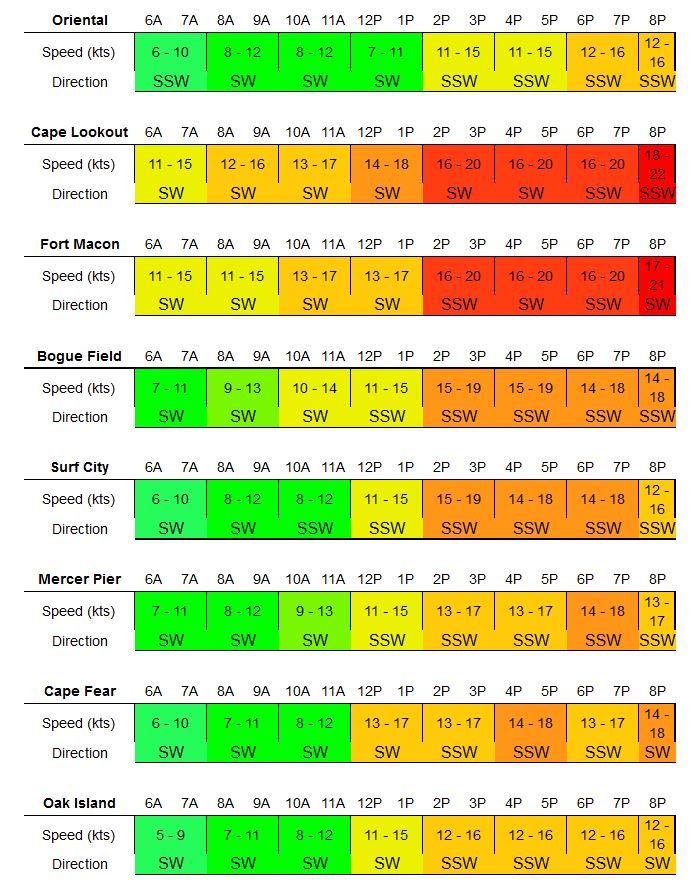 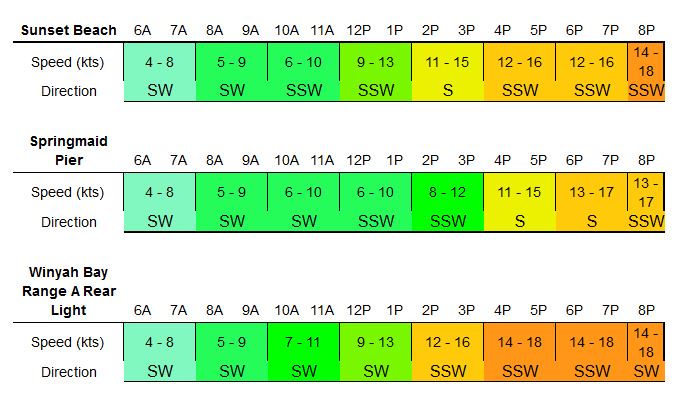 And the graph from Wrightsville, NC (Mercer Pier):

And the graph from Fort Macon, NC (Cape Lookout area) – note the 6mb drop in pressure:

We’ll take a quick peek at Tybee Island, northern GA graph to show lesser Sea Breeze effects as ridging + convective activities/rain kept speeds down there. Some of those storms that were over the coastline backed inland and helped bring speeds up through the late afternoon hours once the ridge axis dropped further south to open up more of a S/SSW flow.