Please explain why/ how wind at 18,000 feet effects the ground wind..?

I was hoping no one would ask that question…

by Mike Godsey, mike at iwindsurf.com 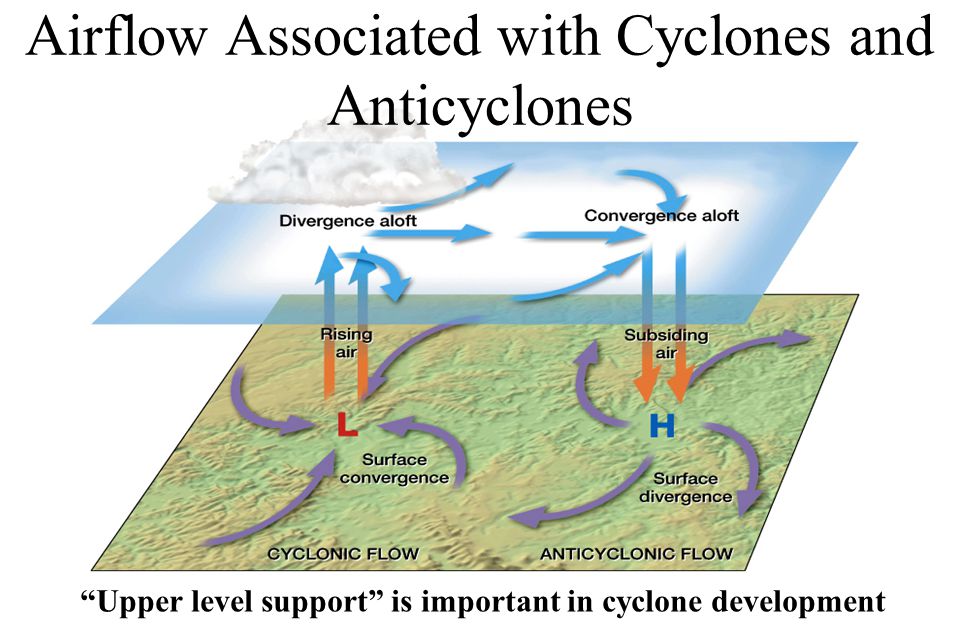 I was hoping no one would ask that question since a simplified answer would take pages and complex graphics. Which I will do one day in a blog. But for now here is an oversimplification using the Bay Area surface winds Friday June 10 as an example…

1. As the winds at ≈ 18,000 ft. flow over us there are areas where this wind flow converges. This acts to cause descending air that induces higher pressure towards the surface. Tomorrow for instance this happens over the North Pacific High so it grows and expands towards the Bay Area hence I am forecasting much stronger NW wind Friday.

2. By the same token winds at ≈ 18,000 ft. sometimes diverge so they cover a wider area. This tends to cause wind below to rise which deepens low pressure at the surface. I expect this to happen over the N. Great Basin tomorrow which should increase the SFO-Winnemucca pressure gradient which adds a few knots to our strong winds tomorrow. 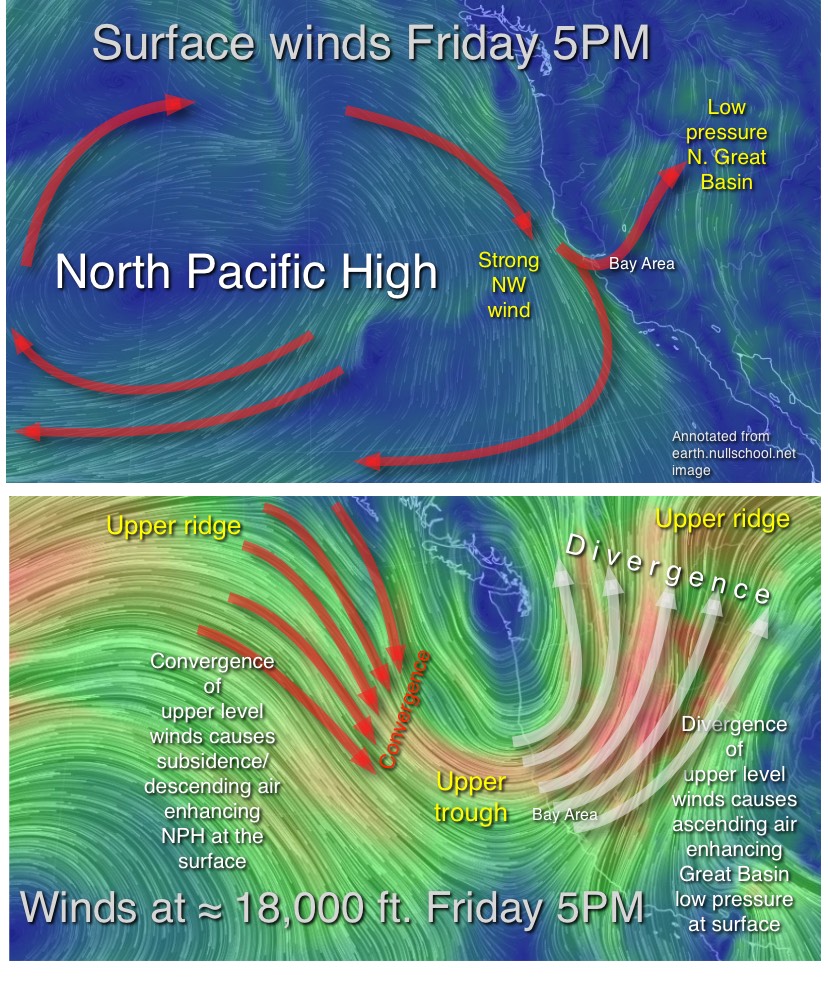 visualize. The top image shows the basic concept. When the 500 mb  winds at ≈ 18,000 ft. exit an upper ridge they converge some of the wind is forced downward towards the surface
packing more air into this region creating higher pressure. And tomorrow this happens over the North Pacific High as you can see comparing the second and third images. This makes the North Pacific High larger and means stronger wind on the California coast. But it also helps create the Southern California Catalina Eddy which you can just make out in the 2nd. image.

Looking at second  image again notice the low pressure in the Great Basin and the wind flow from the ocean over the Bay Area heading that way. The pressure gradient is strong tomorrow which enhances the Bay winds. Why? Compare the second and third image again. Notice the area where the winds at ≈ 18,000 ft. diverge. This causes surface winds to rise so less air is packed in the Great Basin which means lower pressure. Which turn means a stronger pressure gradient between the ocean and the Great Basin so we see stronger wind.

More reasons the wind at 18,000 feet effects the surface wind:

3. The most visible way the upper level winds impact the surface winds is the depth of the marine layer that are so critical in Bay Area surface winds. Basically when the upper level winds steer a upper ridge over the Bay Area the descending warm air creates an inversion with cool often foggy air near the surface and much warmer air just above the foggy air. If the upper ridge is strong this crushes the marine layer clouds so they barely extend to the coast to the Golden Gate. If the upper ridge is weaker the fog goes further into the bay.

On the other hand if the upper level winds steer an upper trough over the Bay Area the rising air allows inversion to lift so the marine layer deepens and the fog moves much further into the bay.

4. Winds at the 500mb level which averages at 18,000 ft. play a critical role in moving the North Pacific High around this part of the pacific making the NW ocean wind build if the NPH is closer or fade if it far away. So tomorrow they move the NPH closer to the Bay so I expect much stronger NW surface wind.

5. The upper troughs these 500 mb winds form also can make the NPH push a ridge into the Pacific Northwest which makes our ocean surface winds more NNW and creates NNW to NNE winds just over the Bay Area which in turn makes the pressure gradient focus west of Treasure Island so Sherman Island dies and the East Bay is weak as you will probably see Saturday.

7. Strong 500mb winds are typically accompanied by strong wind closer to the surface. When these winds at say 1000 feet hit the coast range they climb up those mountains where they pick up momentum from the even stronger winds above the mountains. So when they descend down the coast range they are much stronger and gustier than they were over the ocean surface. You will experience this tomorrow!