Blog.WeatherFlow.com > California & Baja > Post Mortem of a Forecast that was DOA
By Kerry Anderson

instead this is what beachgoers experienced. 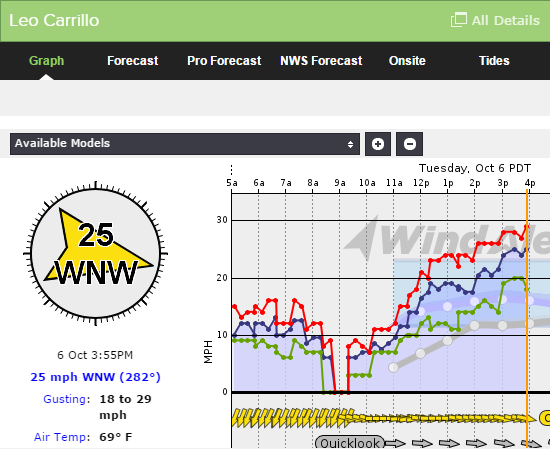 So I got the forecast right up until about noon and then everything hit the skids. It is unusual to see Leo Carillo hit 20 let alone go to the mid 20s.  How did this forecast go so far wrong?  All the models and data suggested that winds would be very light along the shore line of the Southern California Bight.

One of the tools we use to determine the strength of the winds and their direction is the pressure gradients.  This measures the difference in pressure from one location to another.  The higher the number the greater the gradients and the stronger the winds.  This is the report from this morning and I just checked and the numbers still look the same.  All very low.

A closer look actually showed that those gradients weren’t the one’s I should have kept my eye on this afternoon.  High pressure is developing just to the west of the California Bight.  Originally the forecast models had it further north. With its current location the pressure gradient across the Bight has increased and winds turned WNW which filled in to the beaches enhancing the sea breezes. The map below is the 3pm forecast of pressure readings from the 1pm HRRR.  Notice how close the lines are stacked across the Bight. 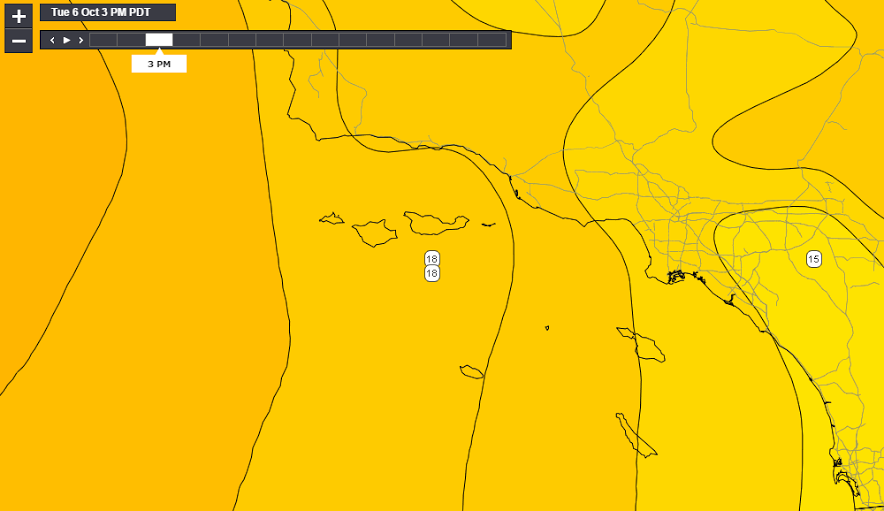 While these gradients are tighter than a usual gradient they aren’t really enough to suggest such strong sea breezes.  The other ingredients seems to be the warming that has occurred in our local valleys.  Temperatures have cooled off over Southern California and you definitely wouldn’t call our local valleys sizzling but there is enough difference between coastal temperatures and the near valley temperatures to boost the development of the sea breezes. While Leo Carillo hit 69F this afternoon Chatsworth was near 80F and that has been enough of a differential to pull those winds onshore.

High pressure will be building just west of the Central Coastline this week.  So once again our temperatures climb back above seasonal levels and the warm inland air will help sea breezes to build. However we don’t expect another afternoon like today as the flow turns more NNW as the High heads northward.