Last year we saw our first recorded marine layering event during the summer-to-fall transition as water temps started to cool, which kept winds down along the immediate beaches 5-10kts lower than what computer models were mostly in agreement with.  16-20kt predictions turned out to be 10-14kts with many UP’s and DOWN’s as winds kept becoming decoupled at the surface over the cooler stable air layer. The original blog is here: http://wp.me/p4sVyF-3Oh

As the same pattern currently holds, several northern High pressures have kept prolonged periods of cooler NNE/NE flow down the coast with frontal boundaries parking just offshore.  Multiple Low pressures tracking along these boundaries have provided quite an extensive amount of rain to assist the cooling phases of the surface waters. Sea Surface Temperatures (SST’s) fell 8 degrees in 6 days from Sept 19th to Sept 25th. Since then, air temps are in accordance with rain water temps and have been holding with a slight degree or two lower while heavy rains have been in and out of the coast.  The Gulf Stream has not had any eddying effects with warm waters as cooler surface water is also riding at the top. Overall, SST’s have fallen to the mid/upper 70’s to GA, mid to lower 70’s along SC and low 70’s with a few cooler pockets of upper 60’s along Southeast NC.  Nothing out of the ordinary – pretty much right on track for where they need to be, but the method and time slot in which cooling occurred was abrupt rather than gradual –  which is somewhat unique.

With so much clouding along the SE Coast, satellite imagery has proven difficult to capture thermal images for decent guesstimates, but you can see the broken up map of SST’s via NOAA-18 showing the cooler temps well down into the 70’s. 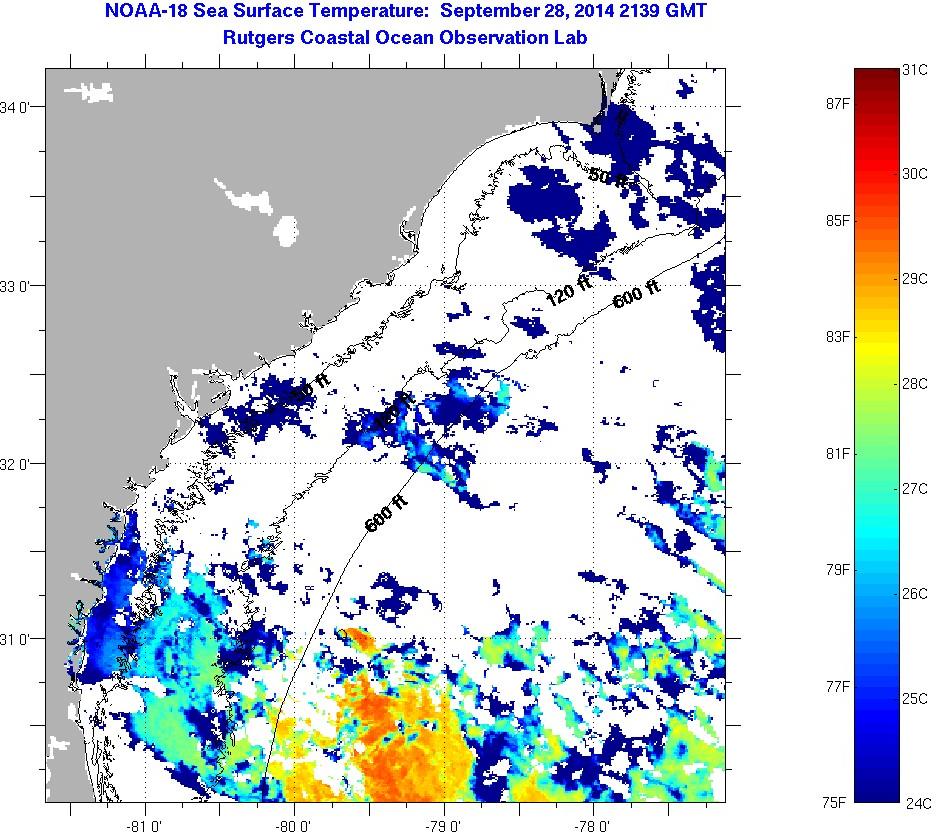 Here are the current tables and averages from physical SST samples – not all points are covered but you can see the trends. 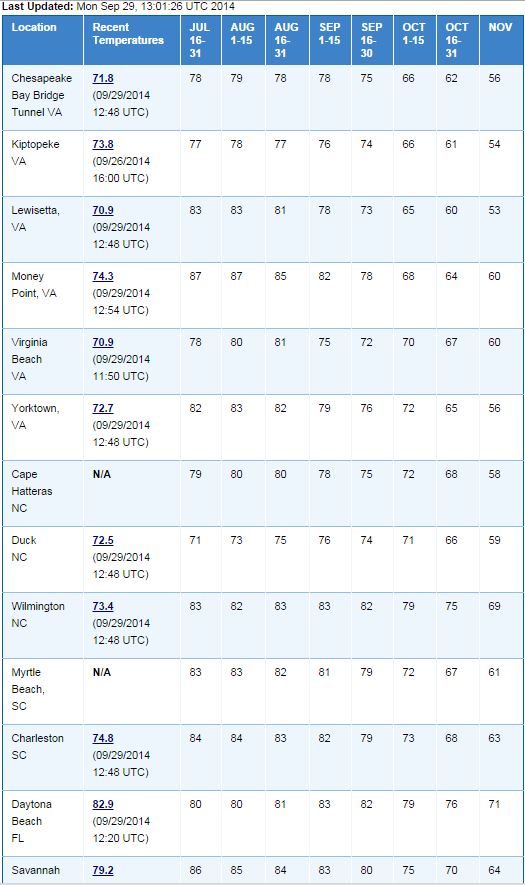 Ok so now the test comes this week with the first possible completely sweeping cold front in quite some time to the SE. It’s a very similar setup to last year at the end of October so we could see a few more of these between now and then, but for now we’ll use this event as a starting point.

Here is last year’s edited WSI surface map right as the front neared the coast and this week’s outlook: 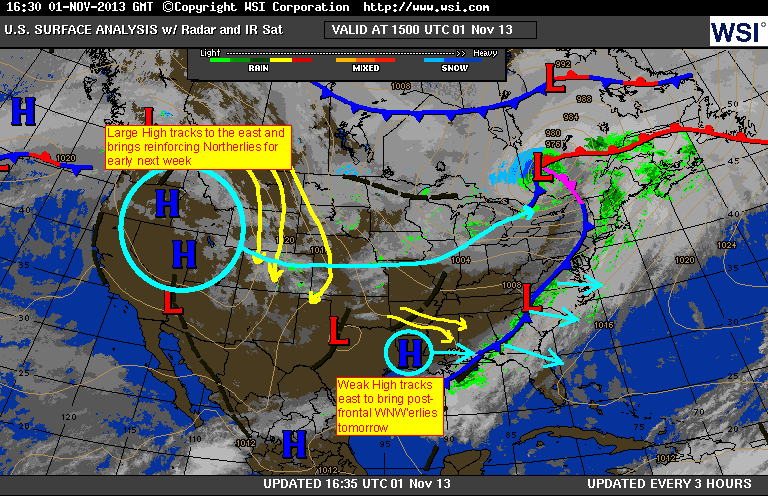 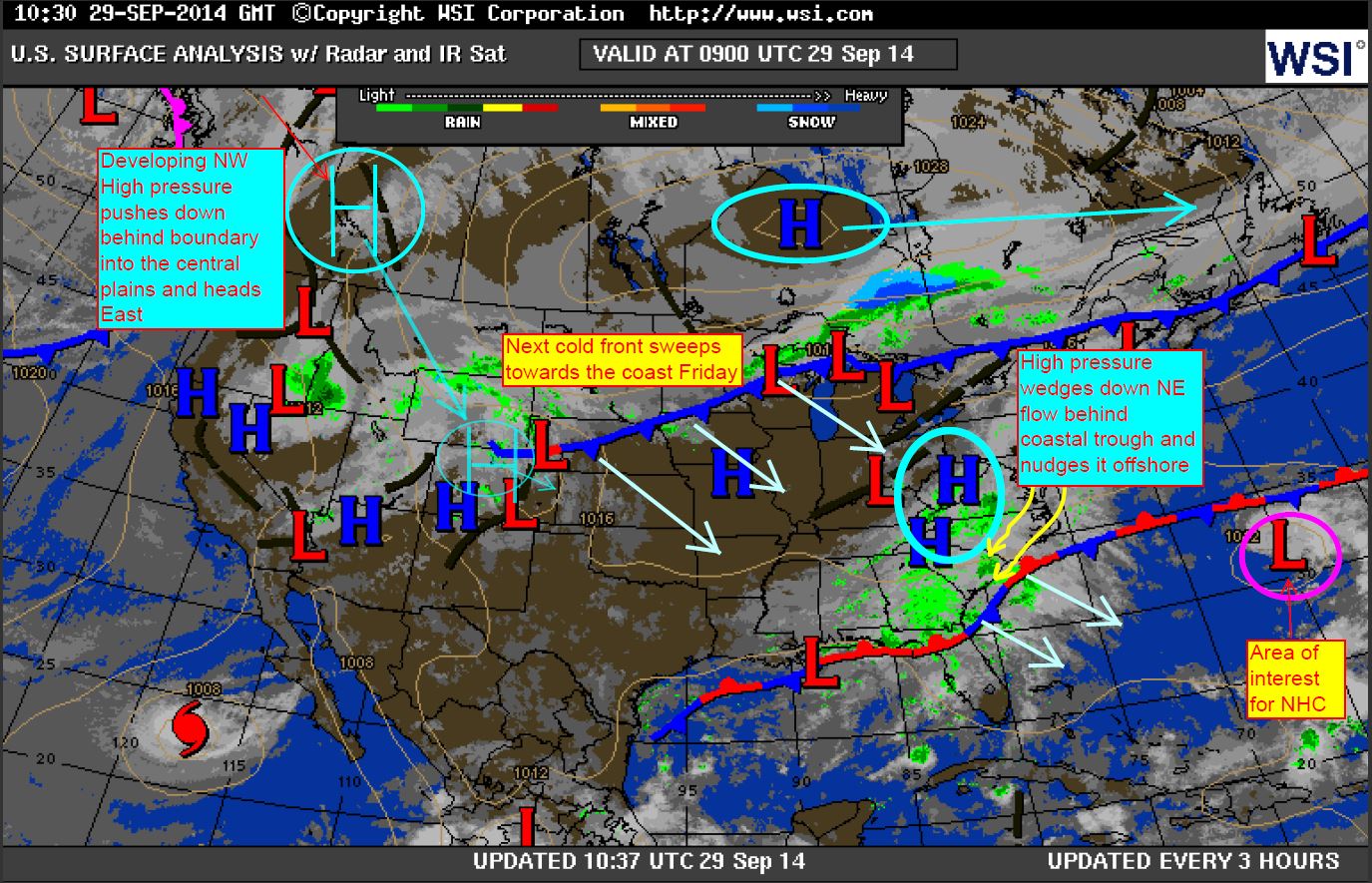 Here is the NOAA/NWS outlook, which brings front across and pushes immediately offshore – very similar to last year’s setup with perhaps a weaker center of Low pressure which could lead to weaker convergence ahead of boundary (another thing to consider). 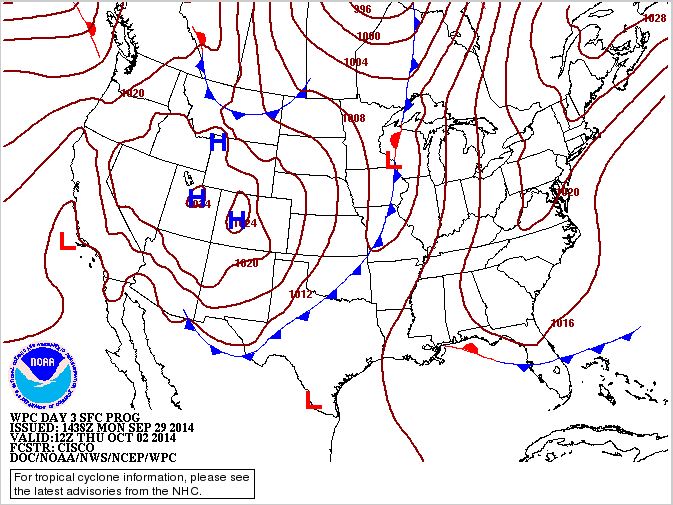 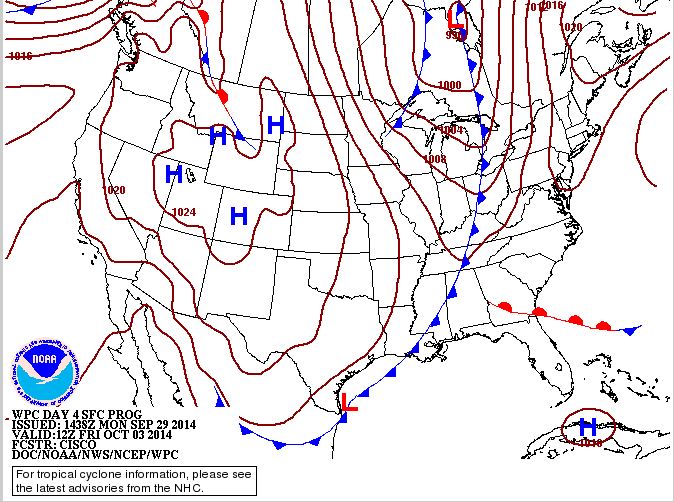 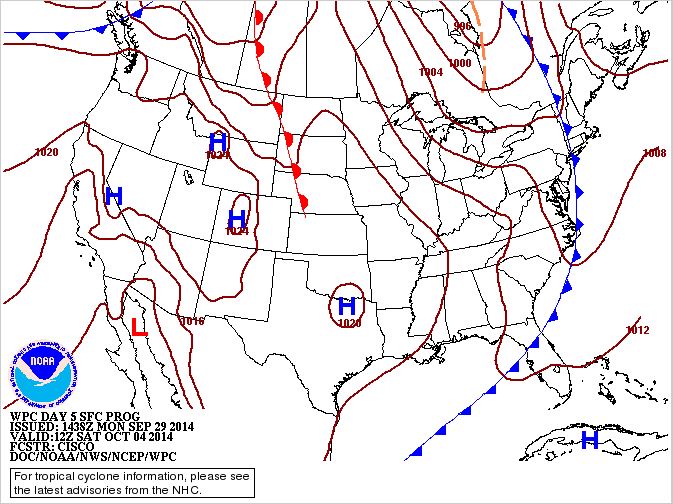 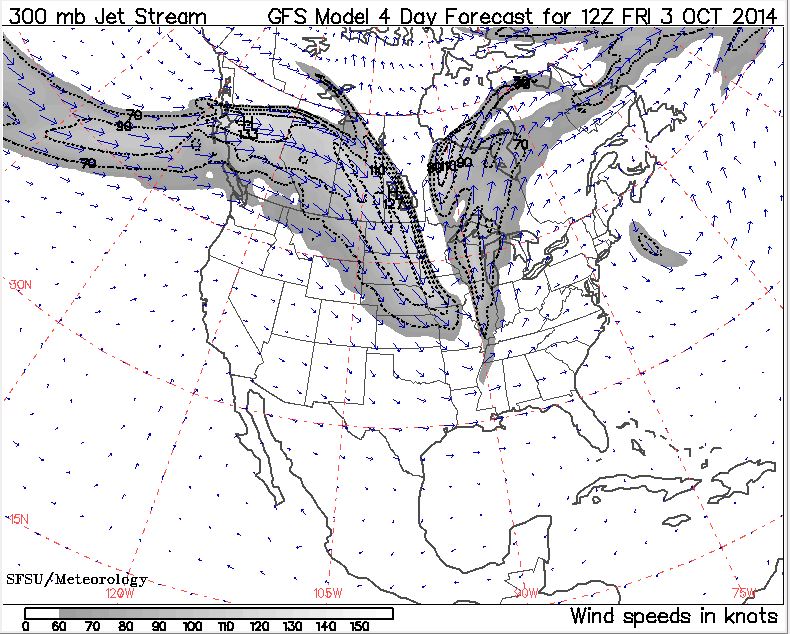 This is the NOAA ADDS (Aviation Digital Data Service) map prediction for the furthest it goes it this point – this one is Thursday at 6000 feet for 6:00pm.  It looks to be around 25kts to the south along the lower jets as the front makes the connection with the Gulf for upstreaming, so we’ll see what things look like in a day or two.

As forecasters, we have to watch for these trends where computer modeling will not pick up on marine layering effects – especially during a first post-summer event approach. Models may generally go by the low level jetting ahead of the approaching front to provide a solid surface mix – and sometimes even catch inland troughing with enhanced gradients ahead of the fronts –  but what they don’t pick up on so much is the cooler water and warmer land interface, which in this case could become more stable just as front approaches the coast.  Last year, the storm lines were held inland across the mid states and fizzled out as they approached the ocean – diminishing to a mere overcast blanket to many locales with maybe a few cumulus drizzles.   Georgia’s water are warmer so their effects may not be as significant, but watch in particular South Carolina and SENC.  Let’s also see if the low level jets are stronger up north and weaker to the south.

Ok so what to look for to help produce increased speeds?

2. Moderate to strong nocturnal jetting the night before during the inversion as a precursor.

3. Inland trough setup to increase the gradient ahead of front during diurnal heating phase (important note: air temps forecast to only reach ~78°-81°).

4. Decent thermodynamics over water for a good surface mix – abundance of sunshine a plus.

Here is what the GFS 0.5° model has leading into Friday…

They seem to be fairly conservative at this point so maybe they’re betting right now on a weaker LLJ. We typically see these climb as we get within 24-36hrs in most cases.

We know at some point that marine layering will occur as water temps cool – we just don’t know exactly when. Let’s see what happens.