Quiet in the Atlantic Basin? Don’t Get too Complacent.

Blog.WeatherFlow.com > Northeast > Quiet in the Atlantic Basin? Don’t Get too Complacent.

We started the late spring somewhat active along the SE United States and western Caribbean for the Atlantic Hurricane Season 2016. Don’t forget – we had an early storm in the eastern north Atlantic in January, which was Hurricane Alex (and still our strongest so far at 85mph winds).  We began the pre-regular season with Tropical Storm Bonnie (top winds 45mph) and went to Colin (top winds 50mph) just at the start of the hurricane season on June 3. Soon thereafter, we had a briefly lived Tropical Storm Danielle (top winds 45mph) that developed in the Bay of Campeche and quickly pushed into Mexico on June 20. Since then, it has been very quiet over the Atlantic basin.

A very large Bermuda-Azores High has encompassed much of the northern Atlantic to keep drier air and a consistent Easterly trade wind pattern going for weeks now.  Along for the ride is the “Dusty Tongue of the Sahara” – or the SAL (better known as the Saharan Air Layer) that is continuing to eject African desert dust into the mid levels of the atmosphere.  This keeps tropical cyclone activity down as areas of Low pressure emerge off of the African coast along the Intertropical Convergence Zone (ITCZ) and move west while blending with this drier dust. As far as the Caribbean and Gulf of Mexico are concerned: Dissipating tropical waves, lack of consistent troughing or cold front tail-ends… and upper level shear have been keeping development down.

Saharan Air Layer showing the dust in red mixing in with the tropical feed just north of the equator.

With absence of any significant tropical waves pulling across from the east or cold fronts being able to drop down and become stationary through Florida to help create more precipitable water environments over the Caribbean, western Atlantic and Gulf of Mexico, the sea surface temperatures (SST’s) have been steadily rising to very high numbers.  We are now seeing 30°C or 86°+ temperatures with a few low 90’s around the waters of Florida. Early last week on July 12, we recorded 94.1° from the Old Port Tampa Bay sensor and 91-93° elsewhere in various spots around the state waters from as far back as July 8. 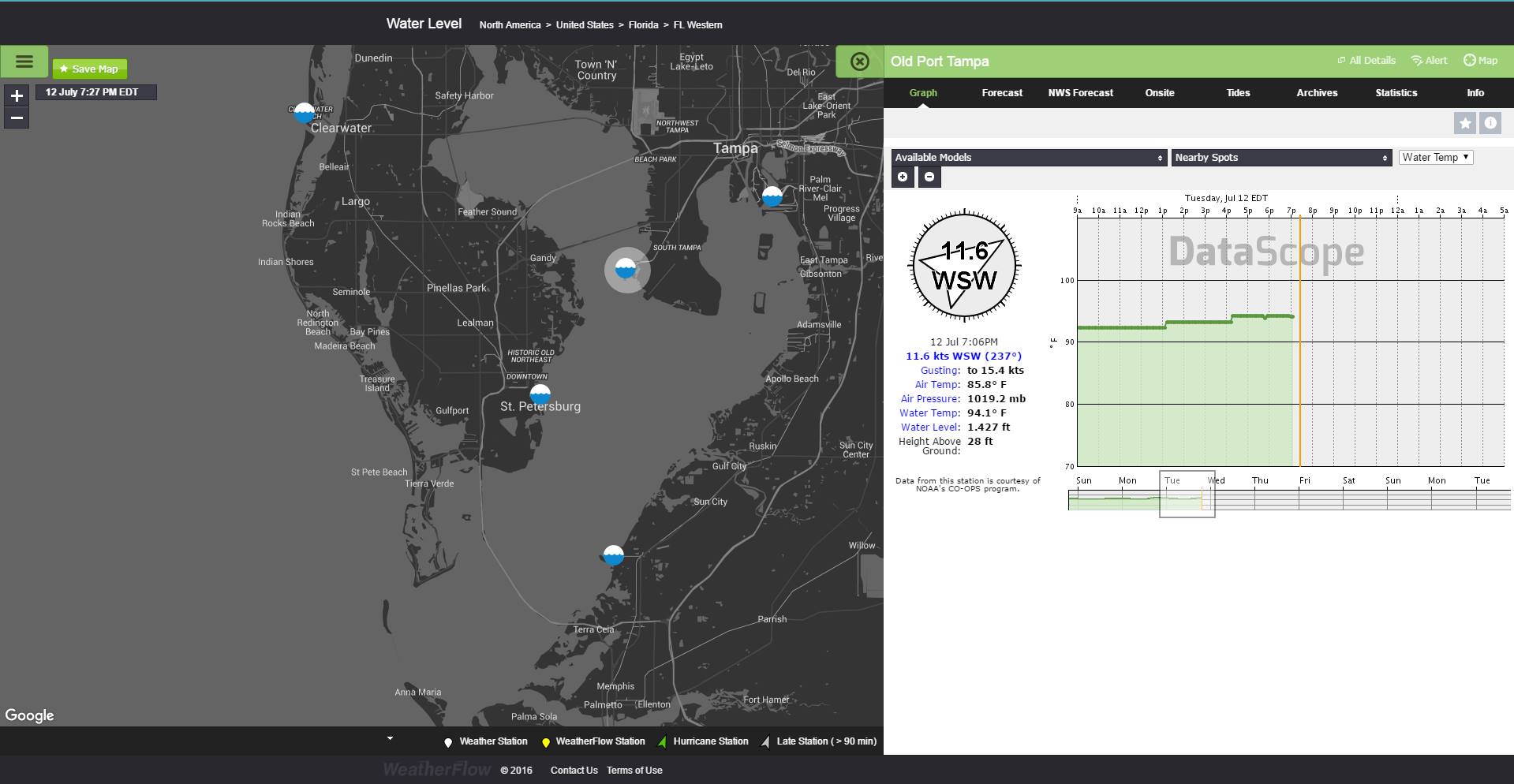 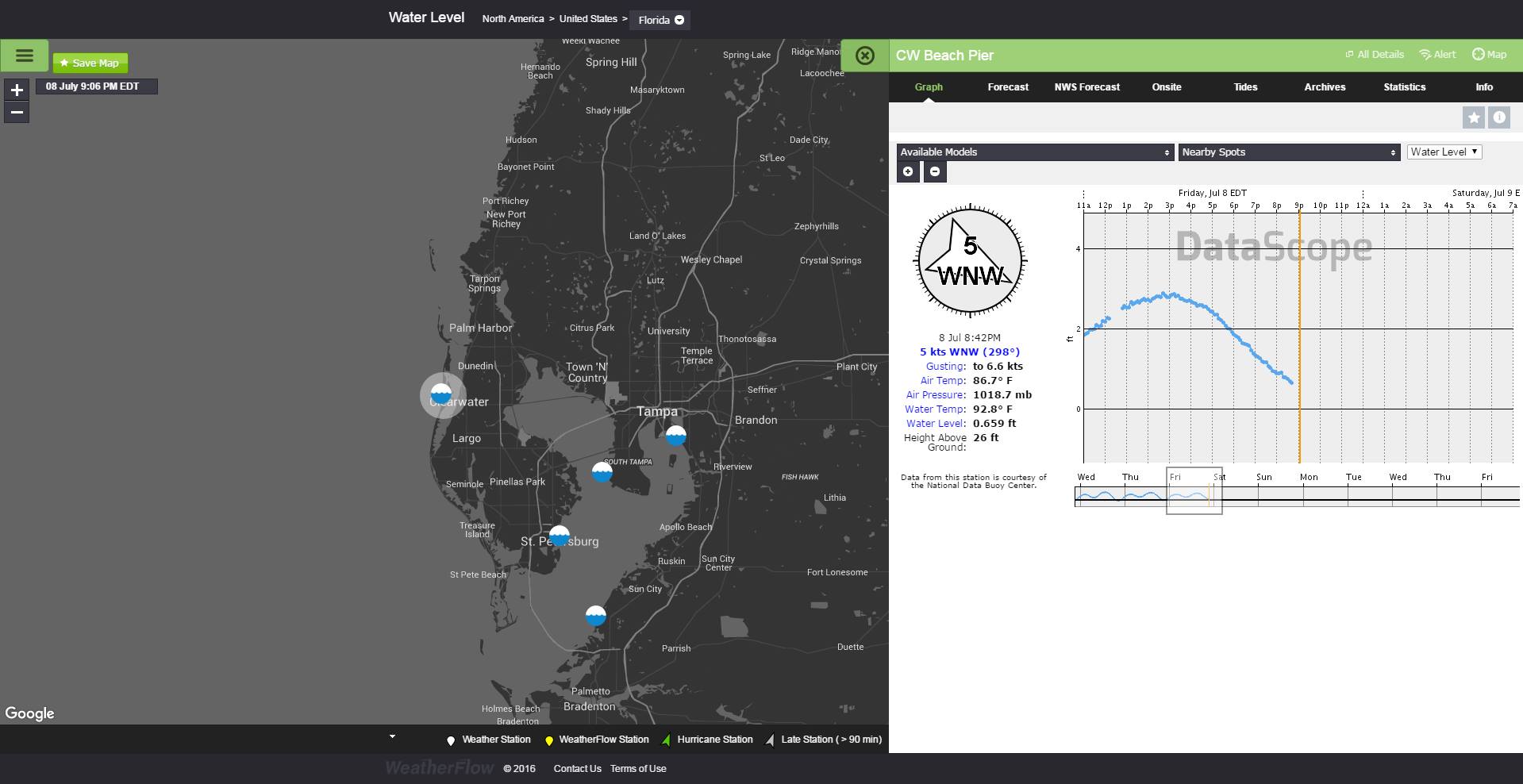 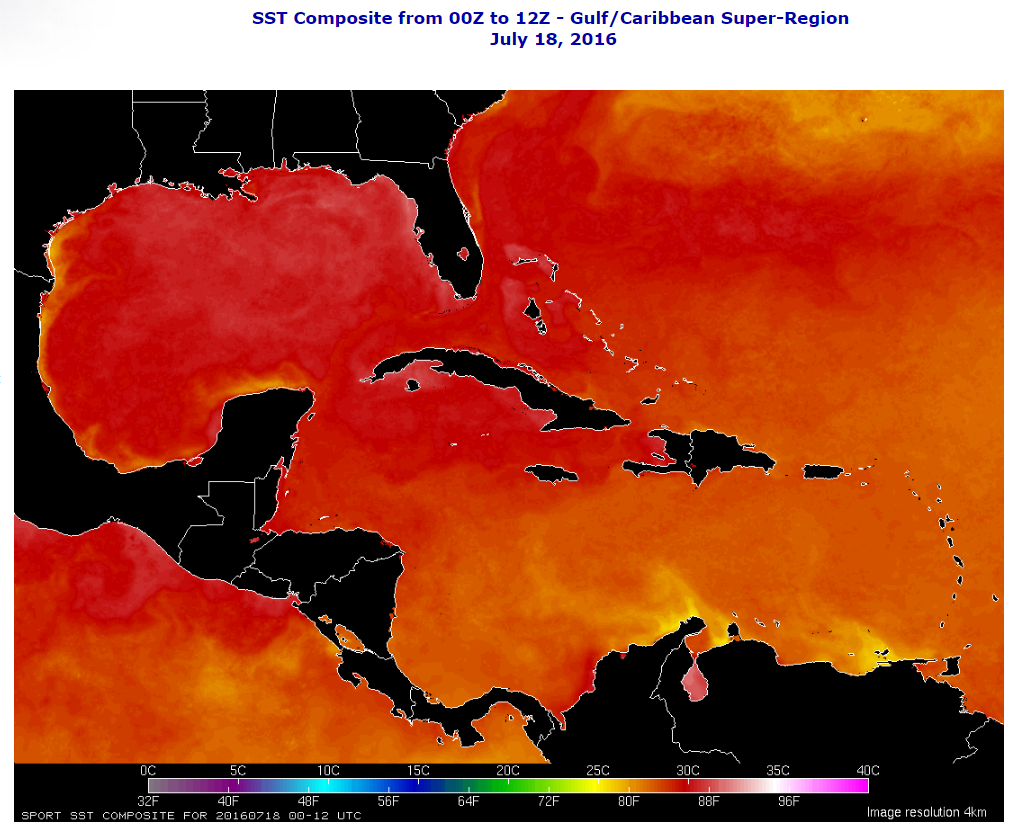 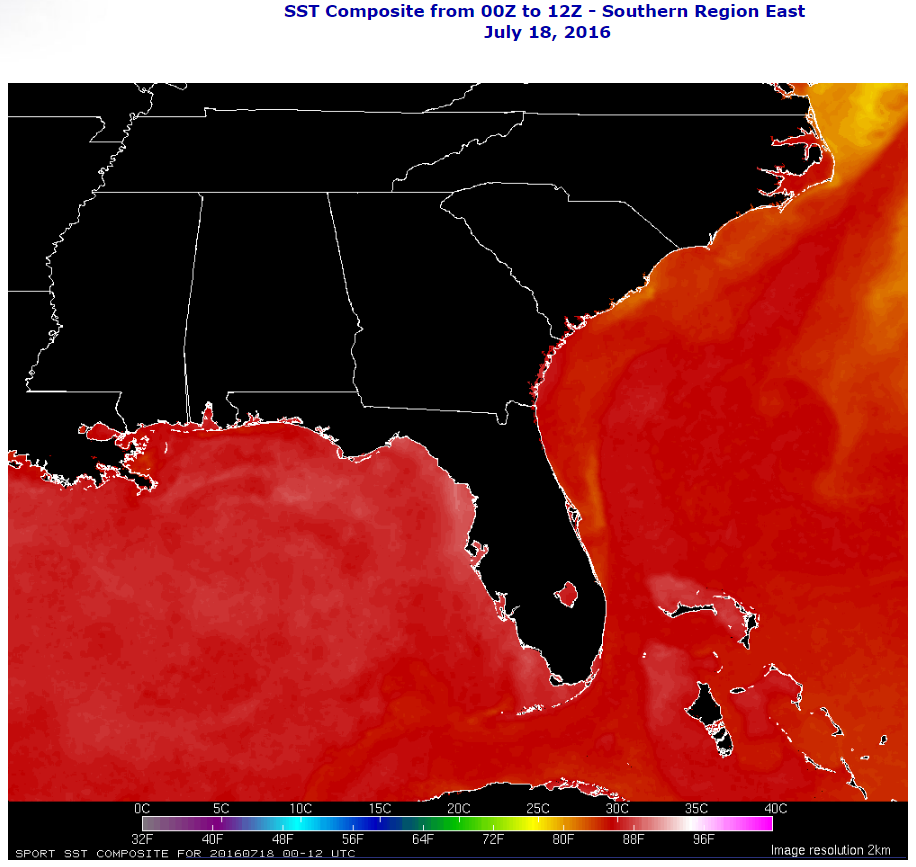 Needless to say, there are quite a few factors that go into the allowable development of tropical cyclones such as a relaxed upper shear environment and surface Low pressure development; however all of this surface heat is apt to provide plenty of fuel to storms once the pattern shifts and we see favorable conditions begin to emerge from our tropics. It has been just over 10 years since we have seen a major Hurricane make United States landfall (last one was Category 3 Hurricane Wilma that made landfall at Cape Romano, FL with 120mph winds on October 24, 2015 – this was after Cat 5 Katrina that same year).  Don’t let your guard down. We haven’t begun heading towards our peak time of the year just yet.

There are some signs that the ITZC will start becoming more active towards the last half of this month as it slowly lifts north and the monsoonal trough makes a better connection with Low pressures coming off of Africa.  We will begin watching the regular swath of tropical waves traveling westwards across equatorial Atlantic and northwards up into the Caribbean.  The Gulf of Mexico could be a hot bed of activity in time, especially with the SST’s so high.

Here is the list for the next few years through 2021 – next up for us this year “Earl” in the Atlantic basin. This snippet is from the NHC website: 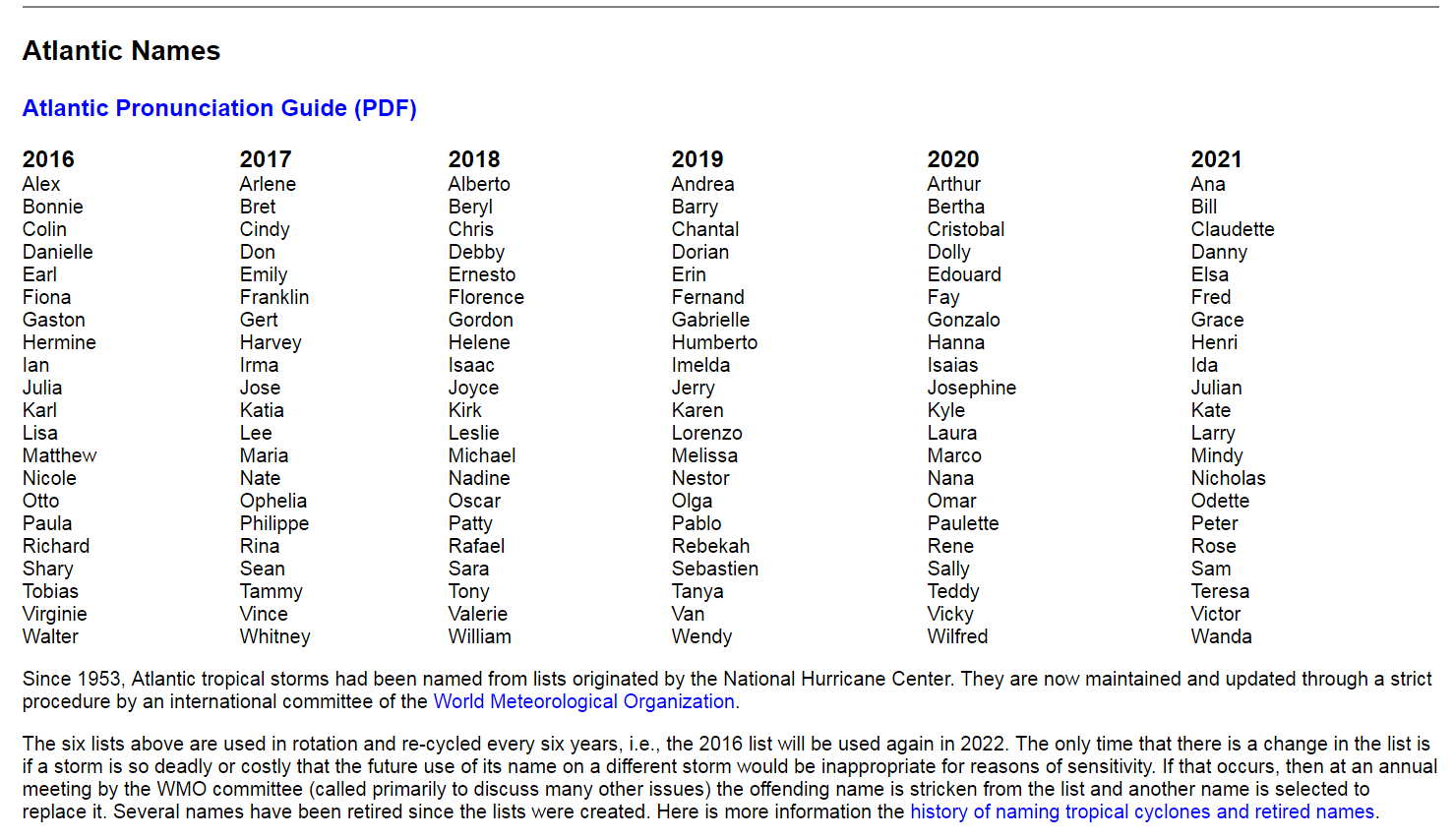 And here is the list of predictions by entity – notice NOAA going with a near normal season prediction base of 10-16 names storms…and NC State University going aggressive with 15-18 names storms.

Tricky year with the transition from El Niño towards La Niña (expected by fall 2016 /winter 2017). Right now, we are in a neutral or what is called “ENSO Neutral” phase.