Somethings happening here. What it is ain’t exactly clear:

Or as Buffalo Springfield once said: “Is April is the new June?” 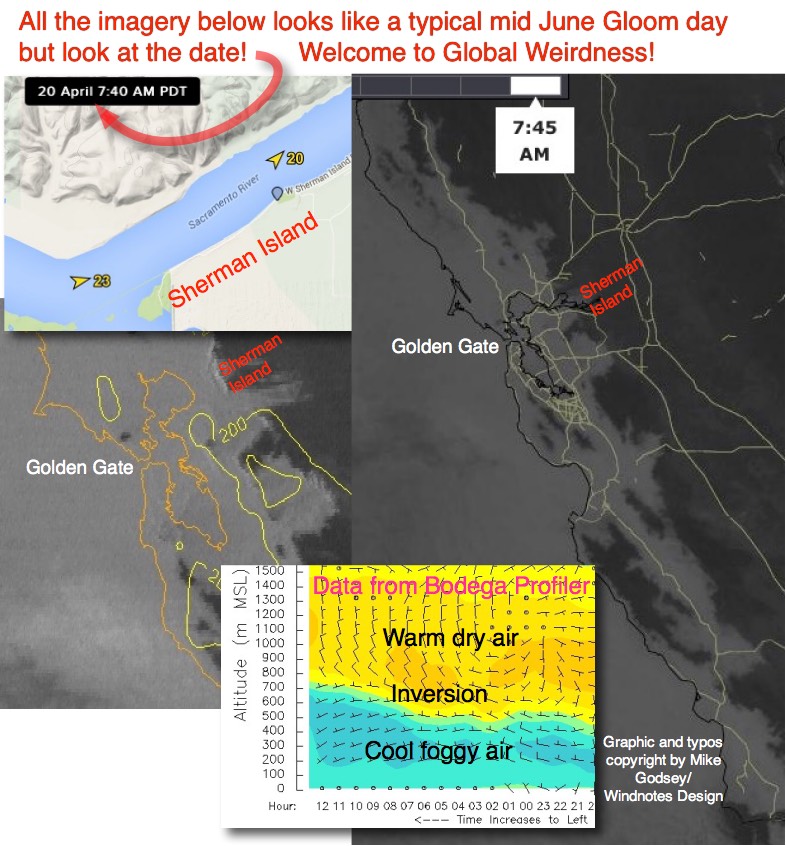 Look at the first bunch of images taken this morning and you can see that everything looks normal…. for June. I mean, what is going on? Deep fog burying the entire California coast and well inland. Sherman Island blowing in the low 20’s. An huge eddy west of the Golden Gate throwing SW flow into the Bay Area when there should be spring NW wind. Has Global Weirdness fully arrived?  No! Instead several fairly common spring variables that create weak SW flow along the Northern California coast just happened to occur at the same time and the combo a very early season marine surge such as we normally see in summer.

Let’s analyze each of these one at a time to see help Buffalo Springfield and rest of us get the picture exactly clear.

In this first animation you can see the NNW to NNW winds of the North Pacific High today. As you know for almost a week the North Pacific High has held a ridge into the Pacific Northwest giving the Gorge summer like weather. And that ridge has caused the Bay Area’s normal NW wind to pull away from our coast and turn

NNW. You can see this on the far LEFT of the image. When the winds of the NPH are in this position we frequently get a weak eddy west of the Golden Gate.  Looking at the middle of the image note the huge eddy west of the Bay Area and and how the resulting SW flow is focused at Sherman Island. But also note how WEAK the eddy winds are outside of the Golden Gate. So at most they could only add

a few knots to the weak SW flow. And the eddy surely could not produce the massive fog bank you see in the top image burying the entire California coast.

So to get rest of the answer let’s of up to almost 5000 feet and check out the winds there. Notice the counter-clockwise winds from the upper level disturbance Ben mentioned in his forecast.

Ok! So we got lots of fog and weak SW flow from the eddy but where is all of strong SW surface wind coming from that is hitting Sherman Island this morning?

Check out the last image. When the North Pacific High tilts into the Pacific Northwest it pulls away from the coast. And this allows theCentral Valley thermal low in the Redding area to expand over the far Northern California coast. So now we have low pressure directly north of the Bay Area. Combine that with a moderate pressure gradient to Sacramento to weak SW eddy flow and you have strong 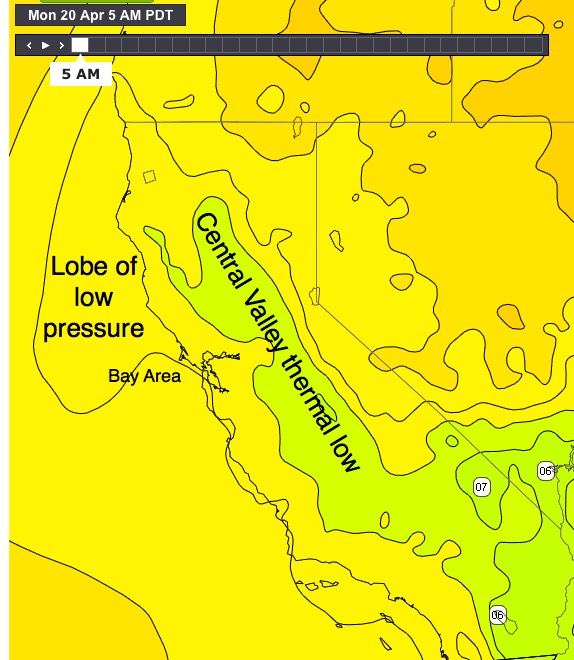 SW flow at Sherman Island. And later this afternoon as the fog retreats that pressure gradient will move closer to the coast and the central bay should see solid winds.