Today we had quite thunderous sound with ground shaking reported along much of the Greater Charleston coast and inland areas. Many felt it could have been an earthquake, others a large explosion.

Ok here it is explained…the loud shaking boom we heard today was a sonic boom from jet aircraft offshore breaking the sound barrier. Beaufort Air Station confirmed they had F-18’s out on maneuvers along NC/SC/GA.

ABC News 4 of Charleston reported in their initial article,  “Reports of a loud noise along with houses shaking is indicative of a sonic boom generated by an aircraft of some kind. Sonic booms are pressure waves generated as the aircraft exceeds the speed of sound, they are perceived by the people on the ground differently under different atmospheric conditions,” said Dr. Erin Beutel, an associate geology professor at the College of Charleston. “It can also take between 2-60 seconds after the plane passes through for the boom to be heard, and over the ocean, the pressure wave can travel further and be heard by more people than on land.”

The USGS and seismologist expert Steven Jaume of the College of Charleston both confirmed that no seismic activity occurred.

The sonic boom was most likely accentuated by an atmospheric inversion above us, where warm air sits above cooler air at the ground. This warm air “cap” usually looks like a varietal of stratus cloud decking and acts as a conductor of sound waves and allows them to travel further inland. The compression of the sound wave between the warm cap inversion and the ground likely amplified its power and resonated through the coastal areas. This morning’s weather balloon sounding shows proof of a strong inversion aloft (where I added the edit in yellow). Visibly noticeable in the sky was in fact a wide stratus cloud blanket.

Below is the edited Skew-T for Charleston’s 7am weather balloon launch – these are found through the NOAA SPC site at http://www.spc.noaa.gov/exper/soundings/ 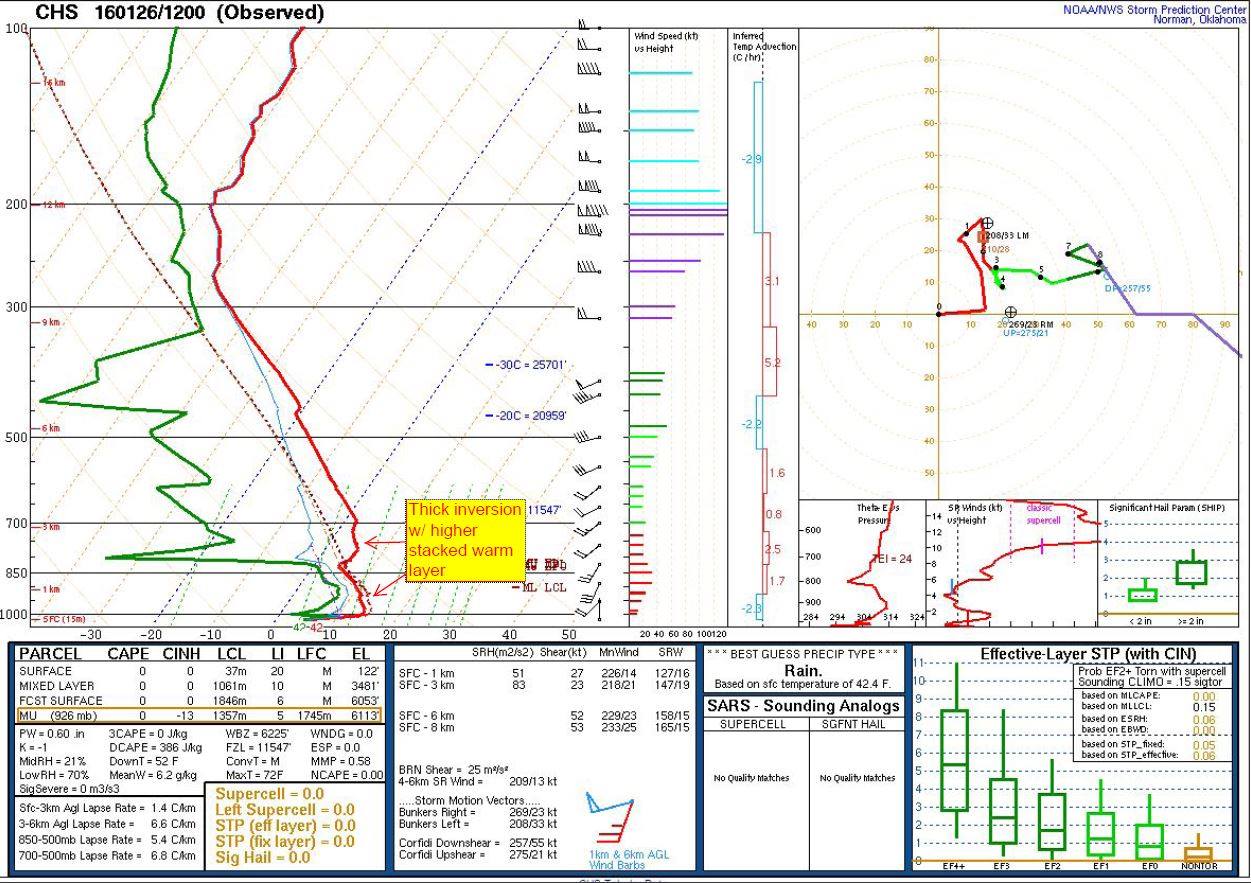 (Visual below provided by and article by Anthony Watts at http://wattsupwiththat.com/2011/04/17/atmospheric-audio-ducting/ where the Tallahassee National Weather Service addressed an issue at that time)

Here is the normal “Base Reflectivity” radar we typically might use, which shows a spot of what looks like showers pop up just off of Folly Beach (no rains in the area). Product Courtesy of Wunderground.

Further evidence of chaff that I caught on “radial velocity 0.5°” shows there was jet activity ongoing just off the coast. You can see the elongated anomaly appear just off of Charleston. This is aluminum-coated or metallized glass reflective material that aircraft release to create scatter, thus cloaking the primary target and spreading the signature out to create what appears as multiple bogies. This is an effective counter-measure used against enemy radar for defense.

And a special thanks to Kit Cloninger of the Carolina Weather Group for sending these two loops over to me from RadarScopePro.

The first is a Base Reflectivity loop that shows what looks like 3 jets releasing chaff.

And the second radar loop using the Correlation Coefficient, which tracks debris in the air. Paints a much better picture of the one closest to the coast.

So…when you have jets breaking the sound barrier, and a conducting layer allowing extended distances of the sound waves, you get a loud “boom” that may at times feel like an earthquake.

One more piece of evidence is the barometric spike that the College of Charleston picked up in Scranton, SC, which maintains the case for a sonic boom and not an earthquake. Typically, one would feel shaking first before hearing the noise following. Those who lived further away may have felt the energy for longer (one report from Charleston local Rick Rush much further northwest in Awendaw, SC for 3 seconds) due to the sound wave elongating before dispersion ended. 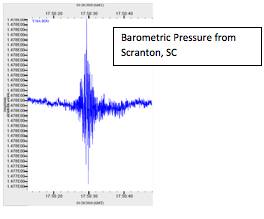 The last picture here shows how this can also happen with thunder from higher elevations of convection/storms (storms that happen higher up off the ground). Brad Panovich – Chief Meteorologist for NBC Charlotte (WCNC-TV), who shows the correlation between thunder and sonic booms for sound wave travel. Thanks for the great visual Brad! 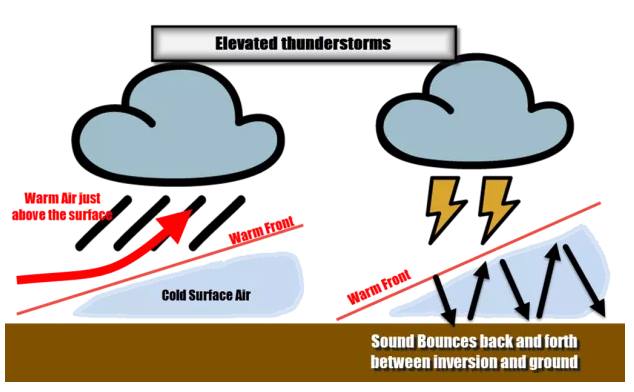 Here’s a great radar loop sequence that shows another occurrence I recorded from November 25, 2013 that shows a clearer example of chaff releases. Moderate NE winds that day helped push it over the coastline.

So how do winds and water affect sound? An interesting fact was that our waters were fairly calm with a very light onshore flow, which also aided in sound amplification.  Ever been on the water and you can hear someone from far away as if they are very close?

In the book, Transportation Decision Making: Principles of Project Evaluation and Programming  by Kumares C. Sinha, Samuel Labi, they state the following in Chapter 11 (11.2): “Sources of Transportation Noise” – which basically talks about noise propagation:

All in all, we are certainly glad that this was not an earthquake. But it sure does keep us on our toes when it comes to sound waves and the atmosphere.

Until next time – stay safe out there and keep your ears “to the sky”!