This blog is a more detailed and imagery based version of a recent forum post.

You have probably wondered where the North Pacific High’s surface NW winds and the thermal winds it turbocharges disappear to in the fall. And more importantly what causes this high pressure and what can we do to speed up its  arrival. So far the latter is beyond my job description. However I can help you understand what creates the North Pacific High and why, with a little patience it will soon be powering your kite or sail.

So in early spring the stage is being set for the North Pacific High by events towards the equator. Looking at the first animation find the USA then Hawaii. If you sailed Maui you will recognize the NE trades winds. 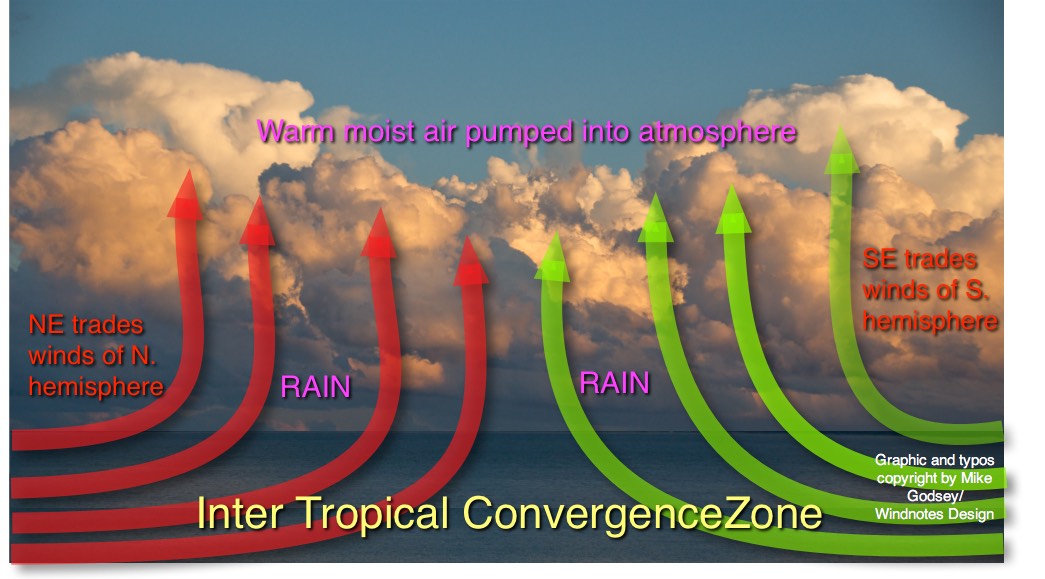 So we can now see a collision point for two enormous masses of moving air. This zone where the trade winds converge is known as the ITCZ for Inter Tropical Convergence Zone.

Now remember that air has weight, about 14.7 pound per share inch at the surface.  Since we are talking about many thousands of square miles of fast moving air which translates into trillions of tons of moving air colliding at the ITCZ. The obvious question is where does all this air go?

Looking at the second diagram you can see what happens. Remember from your trip to Maui what the air was fairly humid. Well as warm moist trade wind  air collides at the ITCZ it rises and creates a global scale strip of thunderstorms thousands of miles long that pumps vast amounts of air into the upper atmosphere.

You can see this strip of thunderstorms along the ITCZ in the third animation. The air pumped upward by these incessant T storms drifts to the north. As it moves it begins to cool, descends and nearing the surface creates a dome of high pressure air known as the North Pacific High.

Since there is lower pressure away from the high pressure the wind blow outward from the NPH. But coriolis force turns the winds so it appears to spiral out from the NPH in a clockwise fashion. 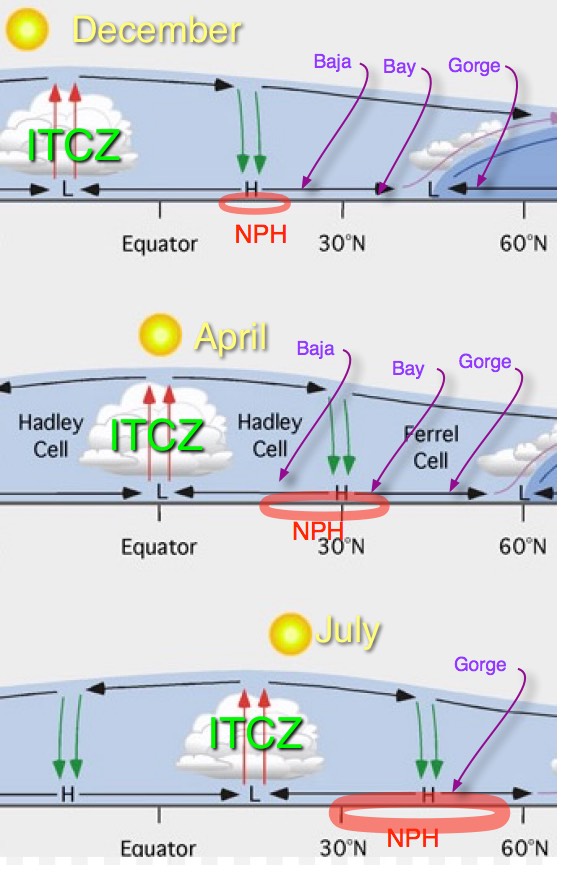 Baja but it begins drifting northward towards Southern California.

But in the spring and early summer passing storm systems to the north tend to push the NPH to the south away from California. But as these systems fade away in late spring the average location of the NPH moves northward first bringing wind to San Carlos, Baja, then Southern California then the Bay Area and ultimately the Oregon coast and The Gorge. Meanwhile as the NPH expands is size it begins to make the NE trade winds of Maui more reliable.

You can see all of this in this last animation.

Notice how the ITCZ and the NPH march northward as the seasons progress. Also note how the North Pacific High expands as we get into summer.

Notice the storm system to the north that keep bumping the North Pacific High’s surface NW winds away from the coast periodically.

In the 3rd video watch the NPH dance about in the north pacific but slowly moves towards the California coast.

In the coming months this process will be repeated again and again with the NW winds building and moving further northward up the coast.

Incidentally this entire description is extremely oversimplified and if you are a meteorologist you are probably having a seizure about now. My description is akin to say that all windsurfing entails is standing on a board and holding a boom and flying a kite is just holding a string.