I am sure it bewilders some of you how fast the wind can change from day to day. After all much of the Bay Area had strong NW Wednesday with blue skies while today it looks like mostly weak 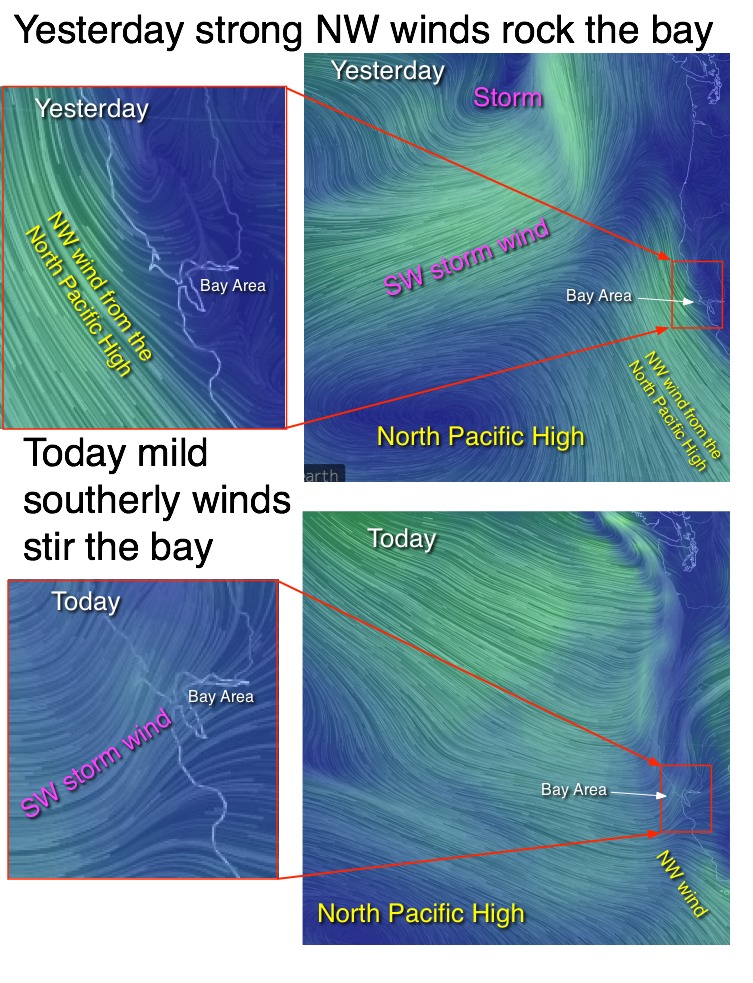 southerly winds and clouds. Others of you are probably bewildered by our incessant talk of large scale phenomena like upper troughs and the North Pacific High when all you really want to know is what size sail or kite should I rig.

Actually both issues are deeply interwoven. The wind strength and direction at specific sites is partially the product of very local events like the pressure gradient to interior valleys. But  on most of the west coast it is wind and gradients from the pacific that turbocharge the wind and determines its direction. And those winds and gradients are determined by large scale events like upper troughs.

FIRST IMAGE: Yesterday in the Bay Area is a perfect example. Looking at the first image notice that the North Pacific High has strong NW winds along the coast and a good SFO-SAC pressure gradient  pulled those winds into most Bay Area sites
. This small scale picture does not give a clue that the NW winds would die suddenly the next day.

SECOND IMAGE: Now look at the 2nd image to see the big picture. Note the location of the North Pacific High and its strong NW winds near the Bay Area. Then notice the counter-clockwise spinning winds of the  storm west of the Pacific Northwest. Note the SW wind far west of California. Yesterday that storm at the surface was being steered towards far Northern California by an upper trough at ≈ 18,000 ft. That is why even 3 days ago we were forecasting weaker winds for today, Thursday.

THIRD IMGAE: Today we are seeing southerly winds over much of the bay. These are unstable winds and strong impacted by topography so you will see a

lot of variation in the surface wind. But the hilltop sensors are seeing SW gusts in the 20-30 knot range. Occasionally a bit of this wind will transfer momentum to the surface wind but overall the wind will be mild and UP AND DOWN.

FORTH IMAGE: So why is the wind so much weaker and SW today? Look at the forth image and you can see that the SW winds of the storm have dropped much further south than yesterday. And note that the North Pacific High and its NW wind have dropped southward so the NW wind focus are closer to Southern California and have abandoned the Bay Area coast.

So why is my extended forecast for building NW winds Friday and Saturday? The answer is that the upper trough steers the storm over the Pacific Northwest. And this allows the North Pacific High to begin to move northward so the NW winds will be returning!

And for fun…..here is an animation of the big picture today: