Temperature Inversions – What, How, and Why?

Blog.WeatherFlow.com > Southeast & Gulf > Temperature Inversions – What, How, and Why?
By Chelsea Carlson

Have you ever heard a meteorologist talk about an “inversion”? Or maybe you read about a “low-level inversion” in a National Weather Service forecast discussion and wondered what that means? If so, you’re in luck. Let’s break down what a temperature inversion is, how it forms and “breaks”, and why it matters to wind sports (hint: dramatic wind changes!)

What is an inversion?

You can spot an inversion by looking at the vertical profile of the atmosphere, also called an Upper Air Sounding or a “Skew-T” (in meteorology terms). These graphs are created from weather balloons that are released and measure the temperature, dewpoint, and winds (among other things) at various heights in the atmosphere. You can read various pressure levels on the left side – where you can see the surface is at the bottom (near 1000 mb).

Below is an example of a Skew-T with an inversion present, from Hilo, Hawaii. 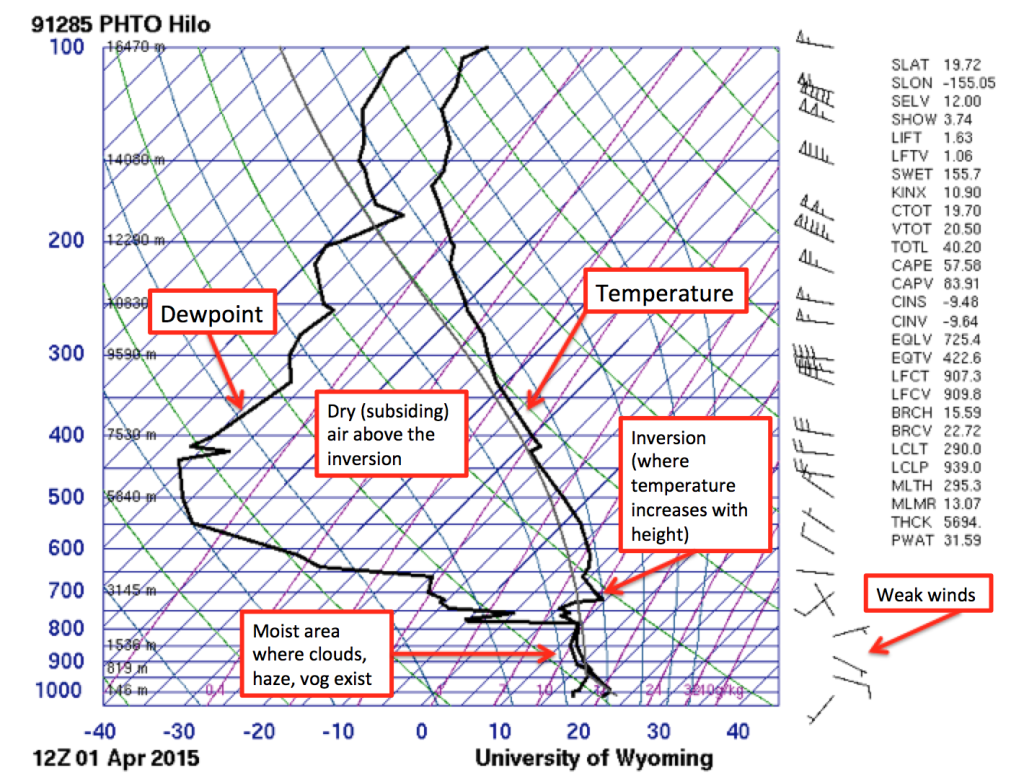 How does it happen?

There are few different ways we can get inversions in the atmosphere. On a normal day, there are several inversions that mark different layers throughout the entire air column. For example, there is always a large inversion at the very top of the troposphere – that’s the very top of where all weather occurs, usually around 8-10 miles high. You may have seen a very tall thunderstorm cloud reach this inversion and develop an “anvil” where the moisture then spreads side to side because it can’t rise above the inversion.

But let’s talk about low-level inversions, which happen near the surface and affect our surface wind. When the land cools off, specifically very early in the morning, a low-level inversion can form because the air a few thousand feet above the surface is warmer than the Earth’s surface, where it has gotten cold at night (called radiational cooling). Sometimes you can visually see low-level inversions on the horizon (on a clear morning) because there will be a layer of haze – especially if you live near a city and have some pollution that gets trapped under the inversion.

Here’s a good example of that from Downtown LA. 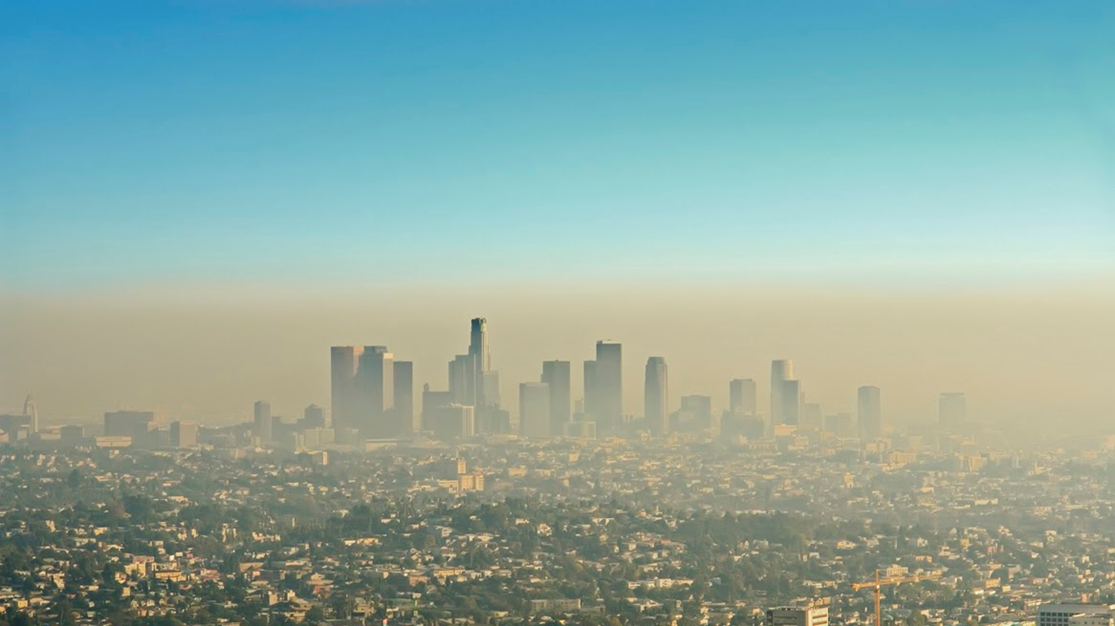 Why do they matter?

When we have a shallow inversion like this, the wind underneath the inversion at the surface is completely cut off from the winds above- so the inversion creates a sort of “cap” (sometimes they are even called “capping inversions”). Often times the wind under an inversion is much lighter, and also can be a different direction than the winds aloft. When it is a low-level inversion due to radiational cooling, often the winds under the inversion will come off of the land (which is cooler) and flow towards the water (which is slightly warmer).

These low-level temperature inversions acting as a “cap” will often disappear once the sun comes up and the land has heated up enough to “break” the inversion. What happens when the inversion breaks? Whatever wind that is aloft will then be allowed to mix with the surface wind.

Here is a perfect example of this entire evolution – from Sat, January 16, 2021 in Clearwater, FL.

I got an email from a sailor asking, “What happened with the wind today? It died, then all of sudden it was 18-20 kts and stayed that way all afternoon!”

From 8:00am until 12:00pm, temperatures over Clearwater were in the upper 50s (54-59 degrees). This was just cool enough to create a low-level surface inversion and dropping the wind speeds down to less than 10 kts.
Here is the closest upper air sounding aka “SkewT” from that morning in Tampa Bay, showing the inversion: 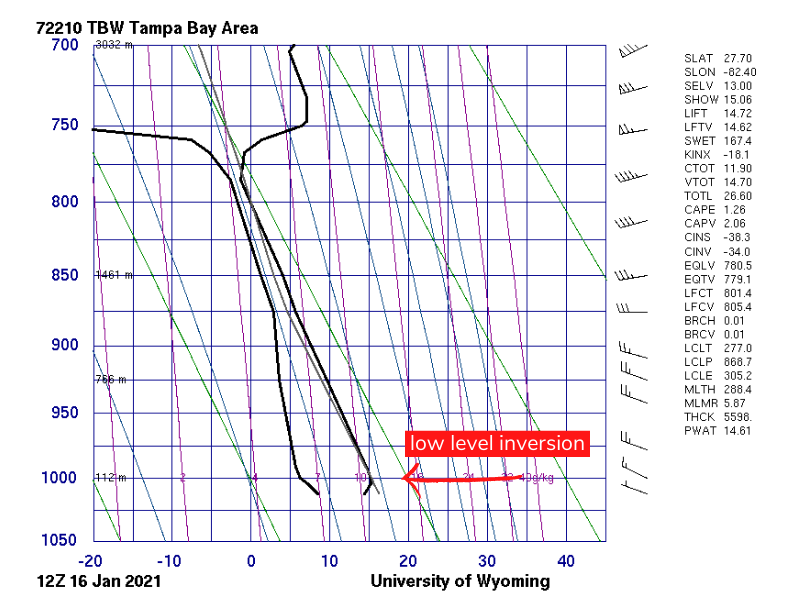 It looks like only a very slight inversion in this graphic (keep in mind this was measured miles away in Ruskin, FL), but it was pronounced enough to allow the surface winds to drop to 2-8 kts below the inversion and turn the winds into the NW (notice how they were W before the wind dropped).

In the data below, notice how when the surface temperatures heated up enough and climbed above 60 degrees around noon, the inversion “broke” and wind speeds from above that inversion abruptly came down to the surface, created a very quick and dramatic increase in the surface winds! 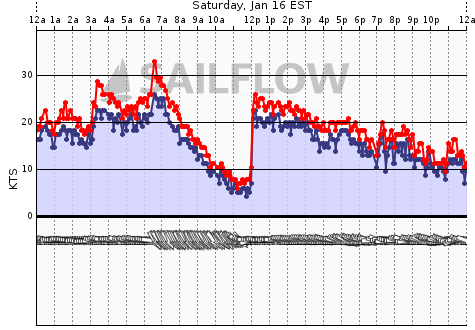 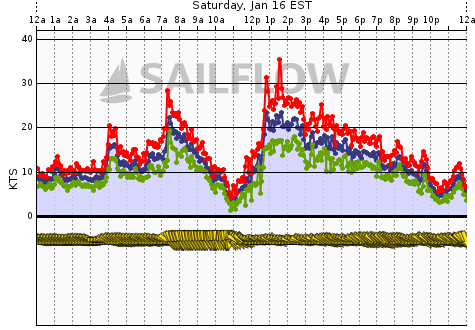 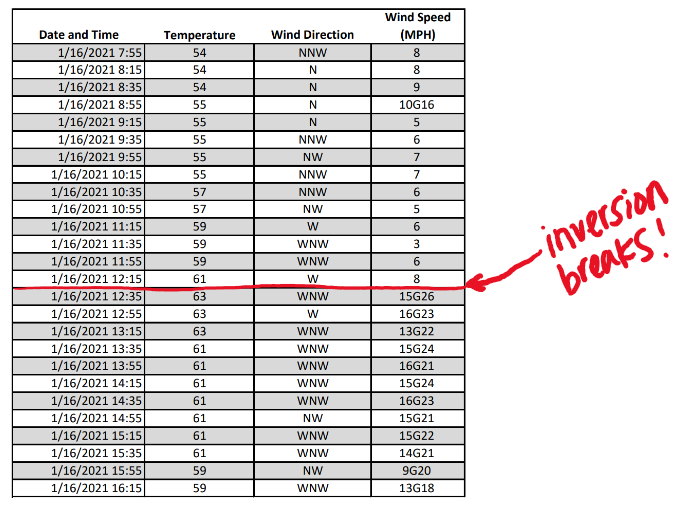 Have you ever experienced kiting or sailing during/after an inversion? We’d love to hear your stories in our feedback form next time!