Yesterday, May 10, 2016, seemed like a fairly quiet day in the Charleston weather world with seemingly overcast/cloudy skies keeping the hotter air temps down while weakening the Sea Breeze along the coast.  However, things are not always as simple as they may seem. What type of clouding was it and what was going on aloft in the atmosphere?  How did it affect winds at the surface? We find that these are a couple of things that WeatherFlow coastal wind forecasters have to watch for in our daily analysis and predictions. Some of these “quieter” days can be very interesting if you pay close attention.

The original forecast presented by WeatherFlow meteorologist Tom Allen noted a modest Sea Breeze with mention of “short waves” to host some weakening effects on the Sea Breeze gradients, which is exactly what happened. 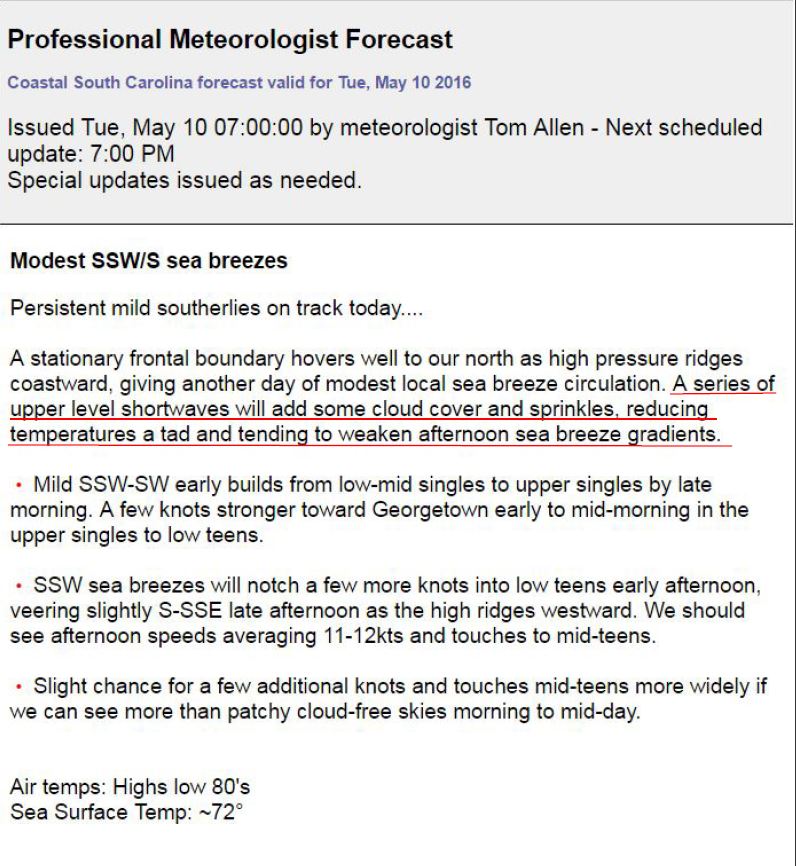 A line of showers was noted on radar by midday into the afternoon slowly approaching the coast. This seemed out of place since there was no surface cold front registering,  nor was there one expected in the SE Region (for GA/SC respectfully). Areas of GA/FL showed thicker convection. A more saturated lower atmosphere saw this rain hit the ground, and others areas did not – especially up into SC. 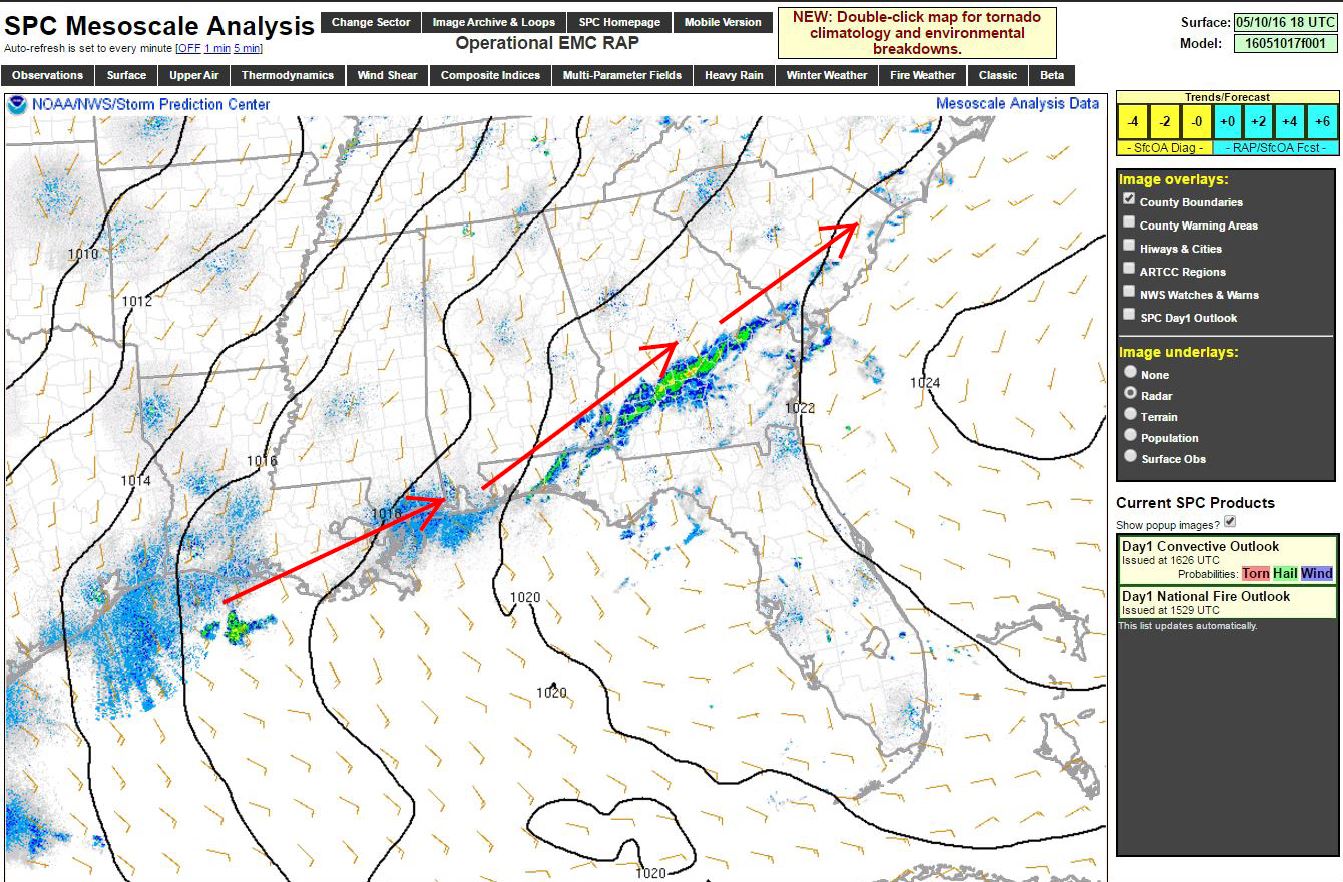 Further analysis showed the Subtropical Jet Stream lifting up into the SE Region into a freezing layer aloft.  The height of the Subtropical Jet Stream is roughly 10-16kms or 33,000-52,000ft up.  This jet is known to carry abundances of moisture along it, which are sometimes known as “atmospheric rivers”.  This portion of the subtropical jet was carrying just enough to assist with convective feeds to those areas with more abundances of sunshine and strong thermal lifting to mix just underneath the stratus cloud decking.

The subzero temps aloft kept the liquid in a frozen state in this case. It certainly looked like the radar signature was showing this moisture reaching the ground near Charleston; however, we see in the Charleston weather balloon reading that there was a subzero degree saturated column aloft likely made up of ice crystals and a very dry slot below that. 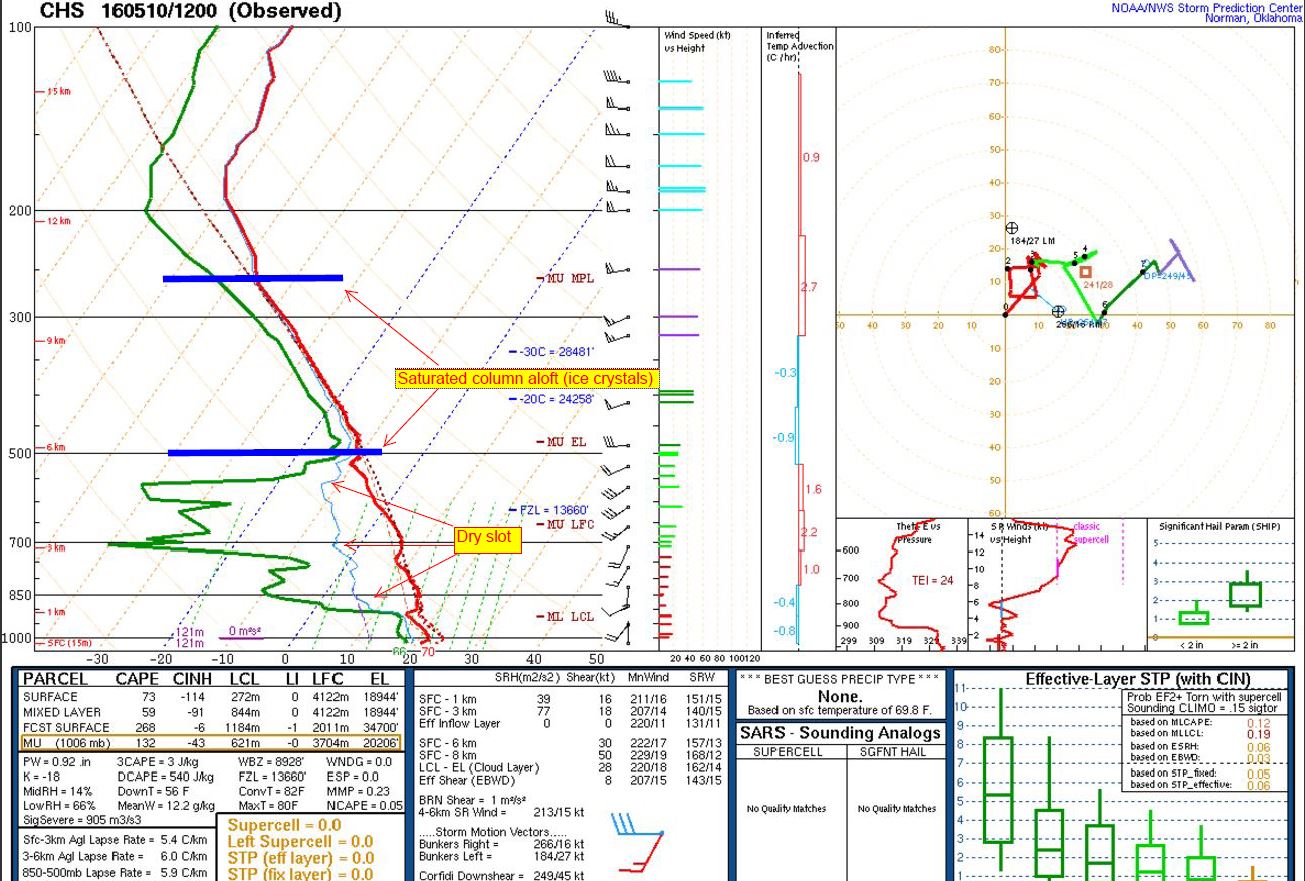 It was so dry that the moisture (ice crystals) falling would sublimate, or turn from solid to gas. (These areas of convection were causing short waves to develop overhead).  This resultant sublimation of ice to gas is is called “Virga”.  From the ground, it can appear as very subtle, and other times can appear more dramatic. This was from North Charleston around 3pm. 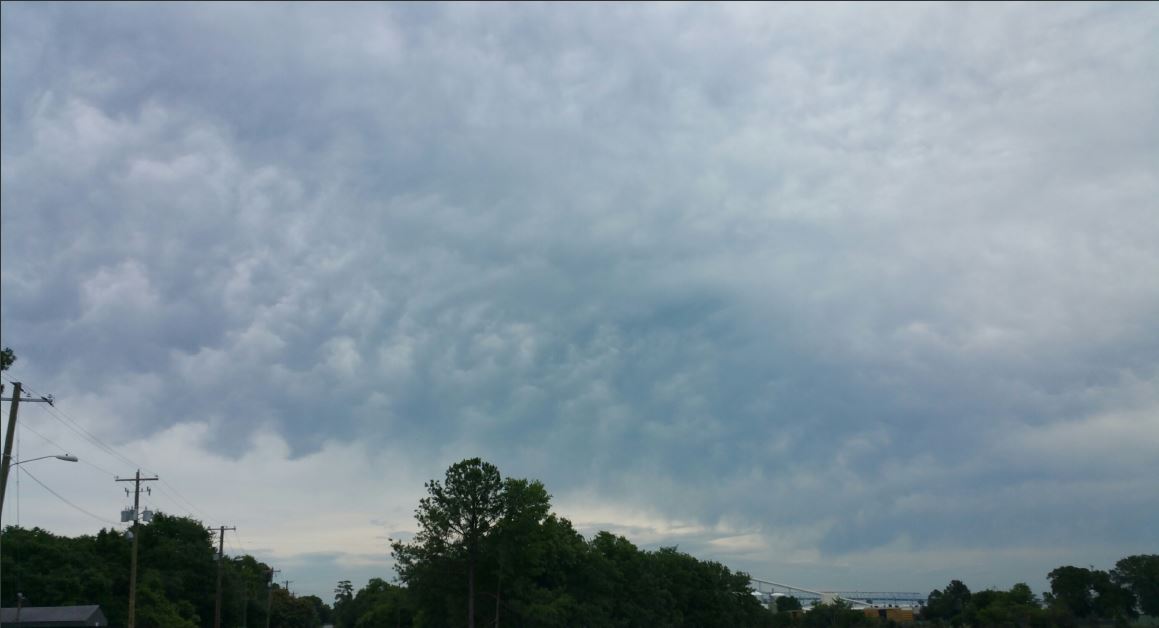 Notice the mammatus clouds associated with these short waves. They are the bulging clouds in the center of the picture. These don’t always have to be associated with thunderstorms as there are exceptions to their development, such as this example.

And this was later over Breach Inlet between Isle of Palms and Sullivan’s Island around 7:00pm for another shot of virga. 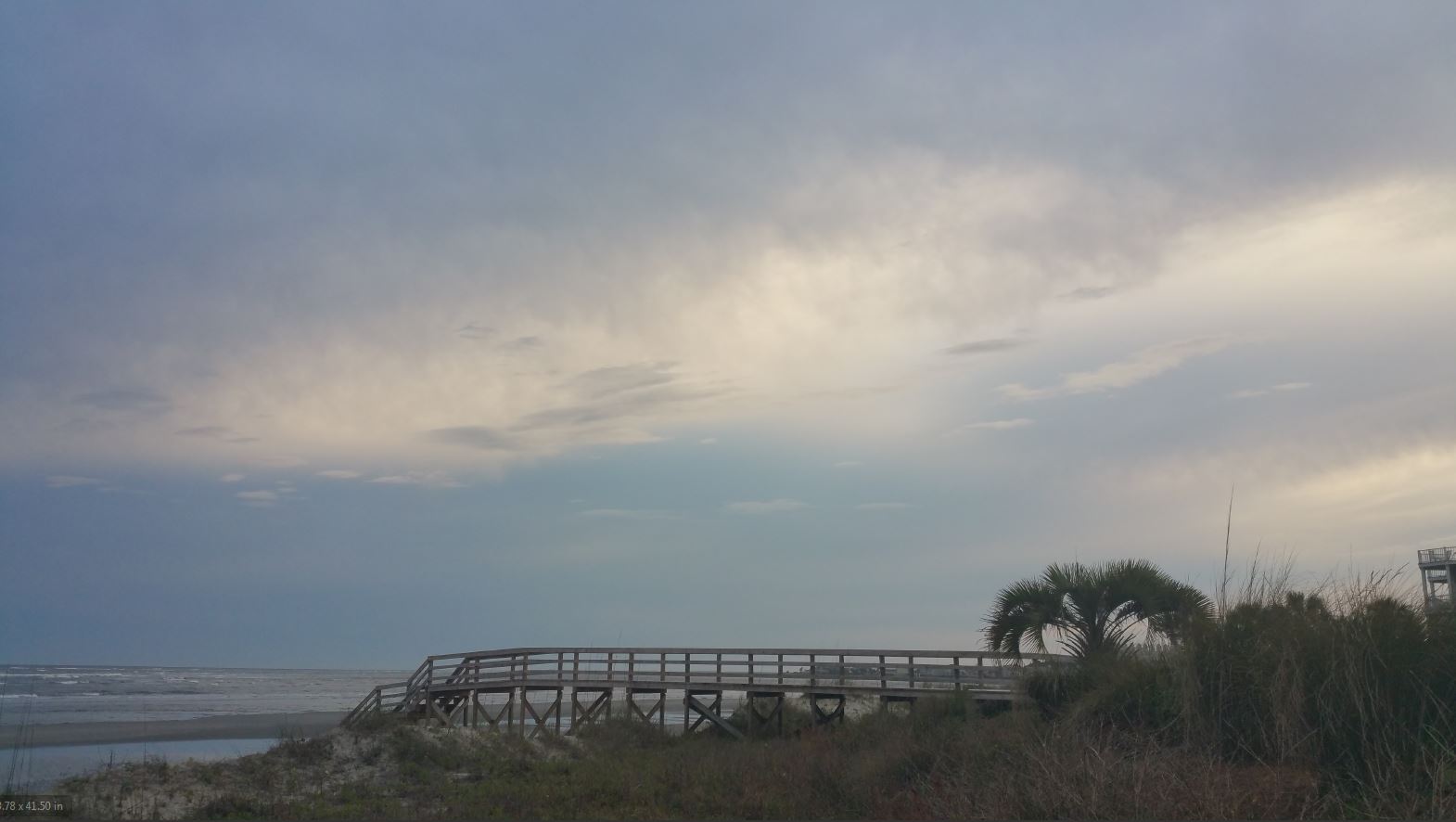 You can see how over time, this precipitation process slowly saturated the atmosphere below it, but not enough to develop liquid to reach the ground. 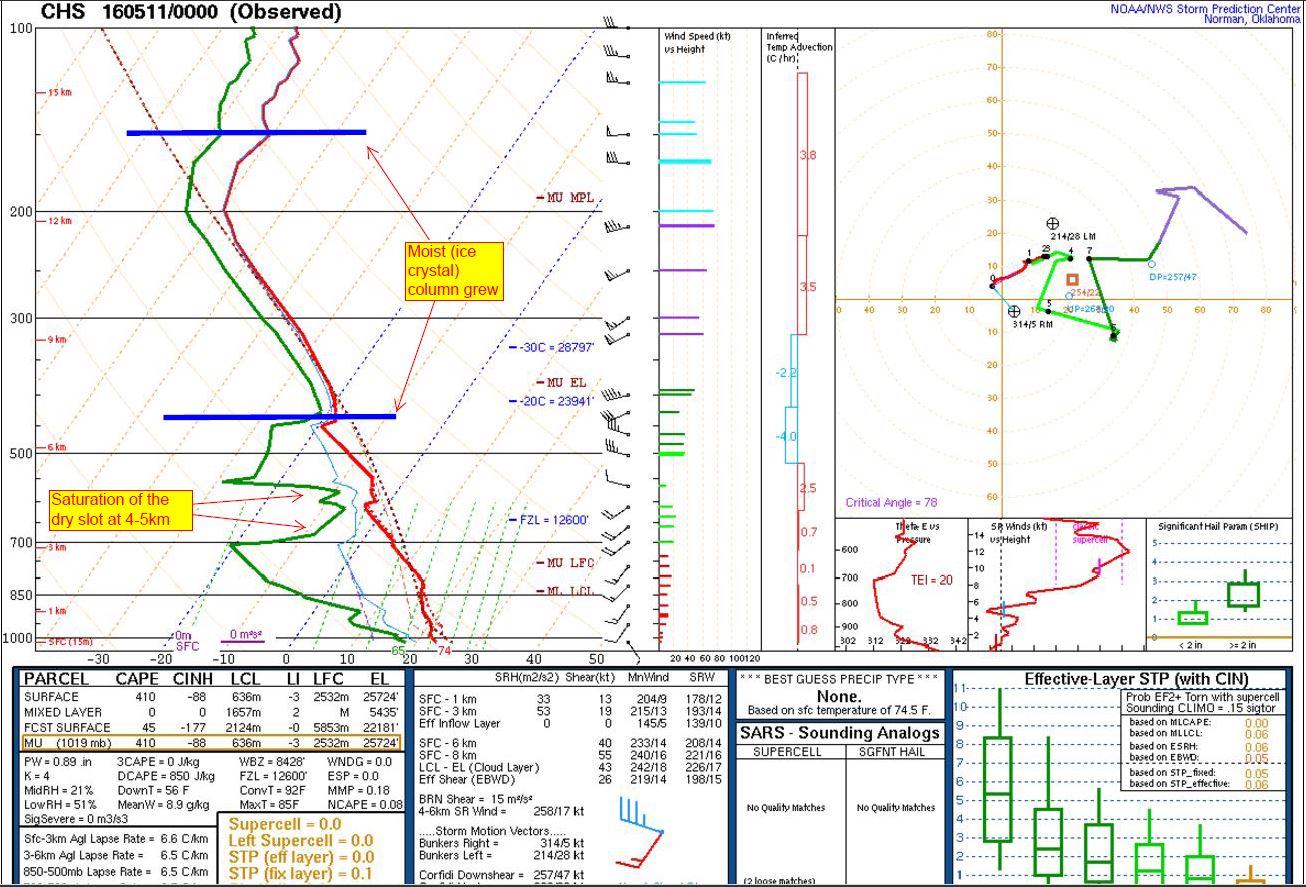 So what does this have to do with surface winds for the Charleston area? Let’s take a look at the entire day wind profile from the Fort Sumter Front Range Light in the outer Charleston Harbor and walk through it:

There are many who watch the wind forecasts frequently for their respective purposes, so we try to learn something new every day about the daily pattern and what to expect. As a colleague of mine meteorologist Joey Sovine from Live5 news in Charleston, SC, once said (and as we understand in the field), “There are no two days alike”.  Never a dull moment in meteorology!