The creation of a Golden Gate eddy

Blog.WeatherFlow.com > California & Baja > The creation of a Golden Gate eddy

If you work the waters north of the Bay Bridge you have seen plenty of strong if sometimes gusty days this season.
But if you are a coast or Coyote and 3rd. Ave. water person you have had many weak or frustrating days. And if you are paying attention you know unending eddies are largely the cause.

This blog on the large scale factors creating the eddies while an upcoming blog will focus on the changes in the pacific that have mede eddies for more common this season.

Remember the old days when everyone just followed the surface pressure gradient from  SFO to Sacramento to guesscast the winds? These days we know that there is a lot more to the wind story than that gradient although it is still a reliable factor.

When it comes to the eddy the causation starts several thousand miles to the north. Looking the image to the right notice the weird kink in the winds of the North Pacific High. You can picture the North Pacific High as a giant dome of high pressure air. Now picture a dome which like a regular mountain having a ridge that extends to the NE. 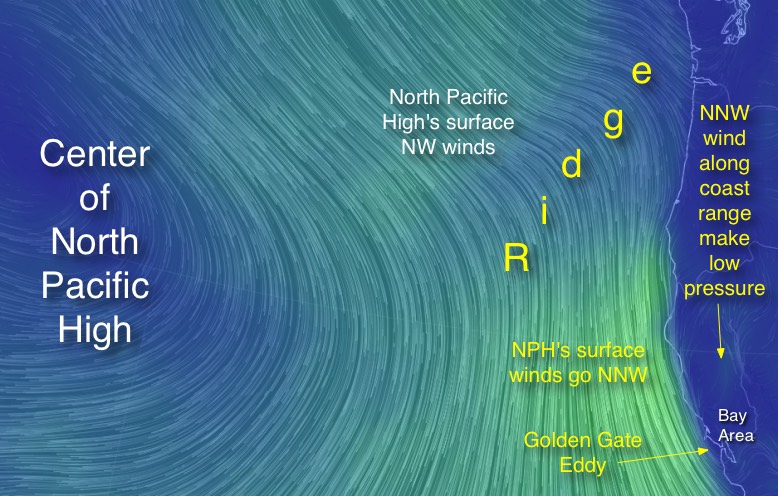 Since the winds of the North Pacific High spiral outwards from the high pressure in a clockwise fashion they make a slight direction change in the ridge area. So while the North Pacific High’s winds along our coast are usually NW they turn more NNW when there is a ridge extending towards the Pacific Northwest.

Checking this out in the image you can see this makes our ocean winds more parallel to the Northern California coast.

Since there are a number of large points of land extending out into the Pacific on the Northern California coast there will be turbulence in the lee of these points which often forms eddies. You can see this in the bottom image near the Golden Gate and near Santa Cruz.

Near the Bay Area Pt. Reyes can cause such an eddy if the wind is NNW. If the ridge and resulting  NNW winds are weak the eddy will typically get blown apart mid day as the pressure gradient towards the Central Valley sucks the NNW winds through the Golden Gate and San Bruno Gap. 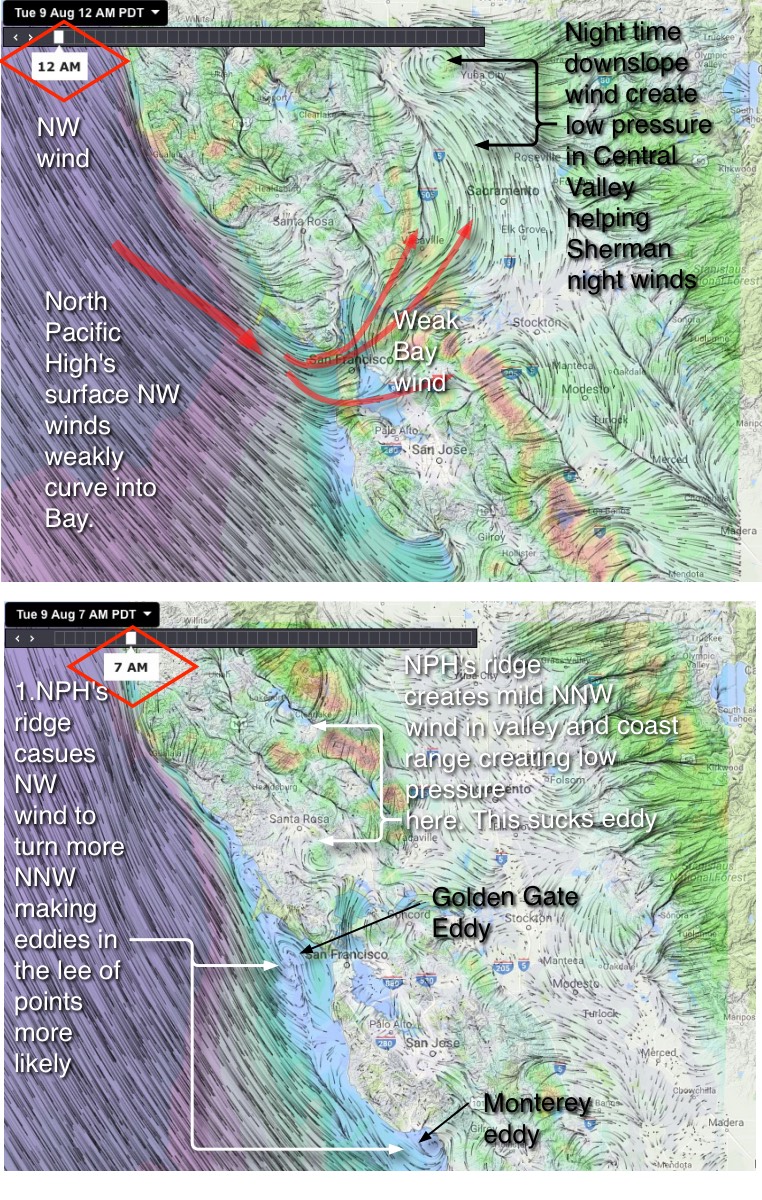 But if the NPH’s ridge is strong and extends inland towards the Gorge then there will  be NNW wind in the northern Central Valley and a longer lasting Golden Gate Eddy.

Let’s look at the next 2 images to see how a lingering eddy is created.

Looking at the model imagery from midnight Tuesday, Aug. 9 you will notice that there was no trace of an eddy. Indeed it looks like a set up for a normal Bay Area summer day with reliable winds at many sites N. and S. of the Bay Bridge.

But by 7am in the next image you can see that the ocean winds have turned more NNW. But also note  that the winds in the Central Valley and especially over the northern coast range have turned NNW. Notice the red area north of Santa Rosa. As this wind from the ridge in the Pacific Northwest descends those mountains it compresses, heats and creates a low pressure zone in Napa and Sonoma. This acts to suck the eddy winds past the north tower and Point Blunt into San Pablo Bay.

This also prolongs the eddy so it tends to: 1. Block the full force of the NNW winds from reaching Waddell and the Peninsula. 2. It may create WSW to W wind in the Hwy. 92 gap that extends from Half Moon Bay to near Coyote and 3rd. Ave. This means that you will have stronger wind north of the Bay Bridge and weaker more W to WSW winds inside at Coyote and 3rd. Ave. And if there the eddy flow is strong enough you may see clouds looming over the Peninsula coast range and if the pressure gradient to Tracy via the Altamont Pass becomes strong enough you will have a sudden shift to WSW wind that can weaken the winds inside at 3rd. or sometimes even kill the winds out in the channel.

This latter nightmare scenario is mostly likely to occur if you see mention of an elongated eddy that extends southward towards Half Moon Bay. Anytime you see this in the forecast stay closer to shore at Coyote and 3rd. Ave.

Of course the even bigger question is WHY are these eddies becoming much more common. And that will  be a topic of an upcoming blog.