The Curve: Where eddy winds and the Olympic Circle intersect

Blog.WeatherFlow.com > California & Baja > The Curve: Where eddy winds and the Olympic Circle intersect 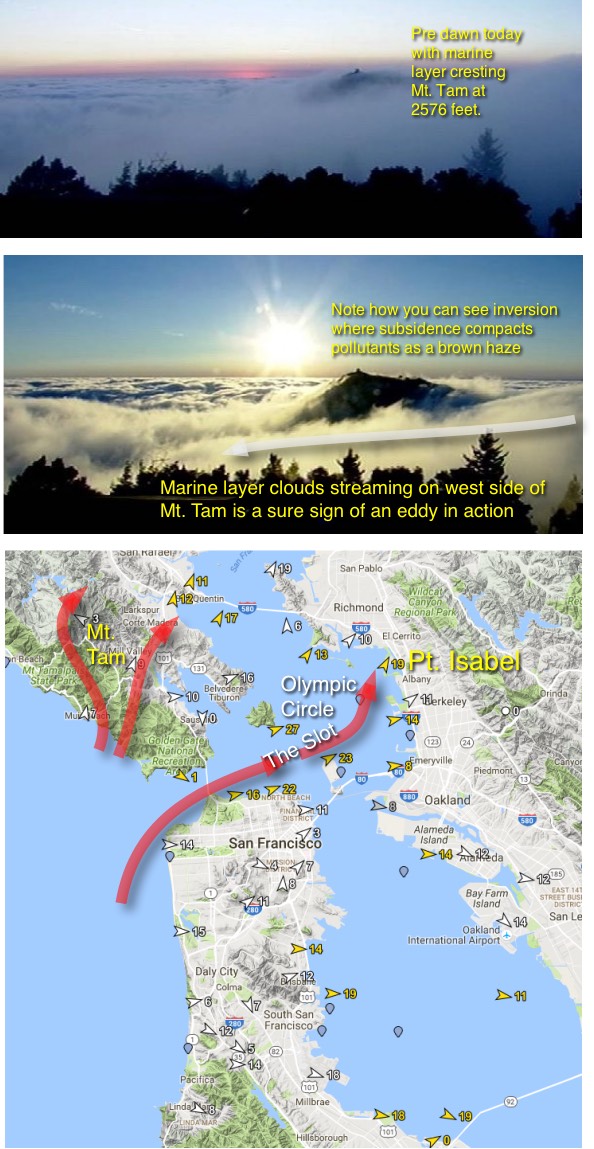 Pt. Isabel and the Olympic Circle.

Pt. Isabel/Marina Bay is one of the great places to kite or sail in the Bay Area. You can actually cruise around a large uninhabited island. Take a hike across and driftwood strewn sand spit and then relaunch and cruise though a jagged gap in the Berkeley Pier.

But the most interesting aspect of this venue is that you can hold a beam reach course to the wind yet end up sailing or kiting at an entirely different angle to the land. Why? Because the waters upwind of Pt. Isabel are one of the few places where you can actually experience the wind making a pronounced curve during a single reach.

Pt. Isabel can be a fickle place wind wise but it breaks out when we have a marine surge or  an eddy. And this has been a year where the Eddy Rules!

Take a look at the top two images from this morning and note that the tip of Mt. Tam is barely above the fog. More importantly notice how there are clouds WEST of the peak. This only happens when there is pronounced southerly flow over the ocean. And in the summer that only happens when there is a marine surge or a counter-clockwise spinning eddy west of the Golden Gate like you can see in my banner at the top of the page.

The next image shows the wind flow yesterday when there was also an eddy. Note how the WSW wind blasts through The Slot then makes a sharp curve towards Pt. Isabel.

You can also see the southerly flow around Mt. Tam and on to Larkspur.

When we get this type of southerly flow the WSW ocean wind reaches the zone of the Slot where it begins to be sucked towards the pressure gradient to Sacramento and Northern Napa. So it makes the curve you see in the map. Note how some of the wind continues on towards Berkeley but the stronger winds head across Pt. Isabel.

In the afternoon as the marine layer clouds retreat from most of the bay this strong flow through the slot and on to Pt. Isabel creates a burn off resistant streamer of fog.

Looking at this animation from yesterday August 25 you can see that in the early morning the marine layer clouds slide way over the East Bay hills.

If you watch carefully you can see how it lingers for a while in the gaps in the coast range that feed wind to different sites.

Also notice the fog lingering near the Hwy. 92 gap that creates issues with the winds inside at Coyote and 3rd. Ave.

But the critical thing to notice is that thin streamer that curves from the Golden Gate though The Slot to over Pt. Isabel. This is the curving windy zone that feeds the sails and kites of those that ply the waters so Pt. Isabel to Brook’s Island to the Olympic Circle.

Let’s take a closer look at “The Curve”. This satellite and wind map is from yesterday afternoon. You can see the curve in the fog streamer from the Golden Gate to Pt. Isabel. In the late afternoon the fog makes a push inland and the streamer widens. Note how the Pt. Isabel winds crank up as this happens.

Then in the late afternoon as the wind and fog push inland towards Sherman Island the fog piles up on the Albany hills. This makes a distinct “T” on the hills. When you see the first hint of that “T” broadening you should thing about  moving closer to shore in the next hour or so since the fog may blanket the sailing zone causing a wind fade.

It is complex fog, wind and land interactions like this that make the Bay Area a joy to sail and a challenge to forecast.