Why were the winds stronger inside the bay than along the coast Tuesday and then weaker Wednesday? 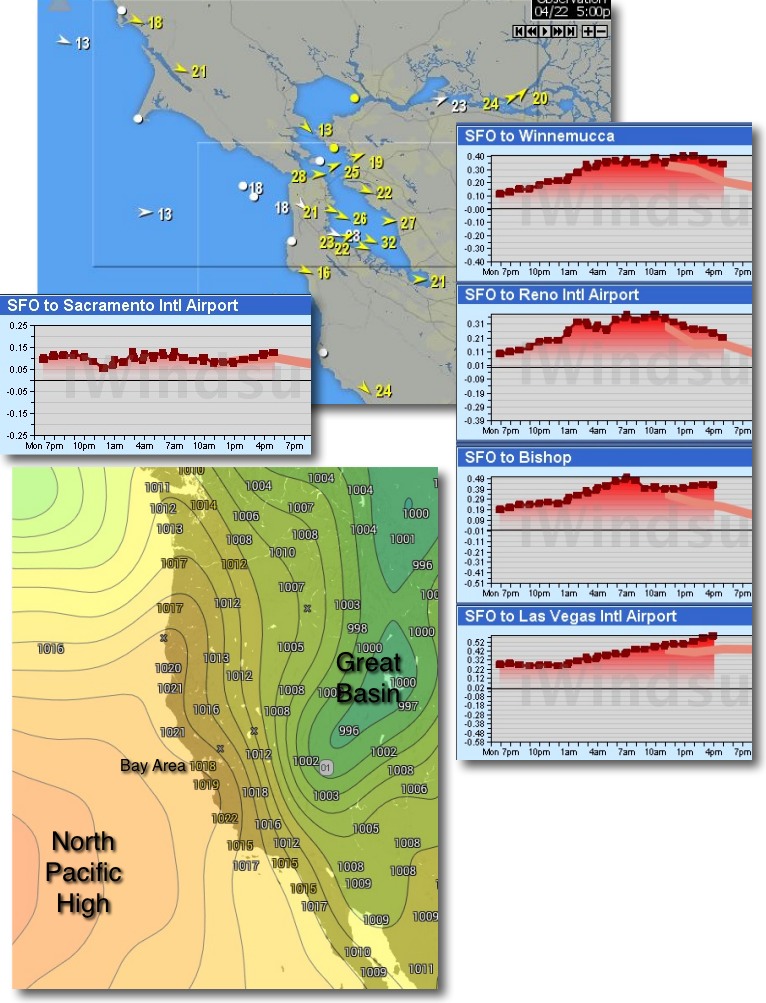 Don’t you just hate it when the forecast babbles on about “powerful pressure gradient to the Great Basin enhances……”?

After all the Great Basin is hundreds of miles to the east in Nevada and Utah how can it impact our wind. Especially since the Central Valley is so much closer. And the North Pacific High in recent blogs looks massive yet the winds forecast for Wednesday are weaker than for Tuesday.

First let’s look at the winds and pressure gradients for Tuesday April 22 in more details. The first graphic shows average winds at 32 knots in the 3rd Ave. channel and Crissy and Treasure Island are in the mid 20’s even at shore. And Alameda is averaging 22 knots which is massive at that typically mild wind  venue.

Weirdly the winds from the North Pacific High are relatively mild in the low to mid upper teens since the high did not come as close to the coast as modeled. But if the NW wind on the ocean is so modest how can so many sites have mid 20’s to low 30’s wind?

Part of the answer is the robust SFO-SAC pressure gradient you see in the left chart. Notice how it peaked at a strong .12 inches at 5PM. But that strong of does not typically bring 3rd into the 30’s and surely not Alameda to the low 20’s.

Where did these huge pressure gradients come from Tuesday? Below the upper trough you saw in the last video there was a vague surface low pressure. This low pressure passed over us Monday and settled in the Great Basin overnight. Looking at the isobar map of the western USA in the next image find the NPH. This is an area of relatively high pressure. Now notice the pressure readings in millibars as you go from the coast inland. Notice the small change in pressure as you cross into the Central Valley but check out the major pressure drop in the area labeled Great Basin. The lines you see on the map are called isobar lines and connect areas of equal pressure. They nicely define the North Pacific High and the Great Basin low pressure.

As you know wind travels from areas of high pressure to areas of low pressure. But the wind from the North Pacific High is mostly a surface wind and when encounters the coast range it “seeks” the path of least resistance which of course is the gaps in the coast range so you get a venturi effect. But there are few gaps in the East Bay hills except at Sherman Island and the Altamont Pass. So most of the wind is forced up and over those hills.

In addition there are NW winds aloft associated with the back side of the upper trough you saw in the last blog video. As those winds hit the coast range the form ripples that sometime reach the surface which is which is why many sites had gusty conditions or periods much stronger than the average wind.
So where does all of this wind from the North Pacific High go……? Look at this video and you can really see the importance of the Great Basin in really strong wind events. Note how all the wind coming over Northern California and Southern California converges on the center of the Great Basin low pressure.

However today, Wednesday April 23, the low pressure in the Great Basin has departed which will mean weaker and less gusty winds for the Bay Area. You can see this is the next video made this morning at 7AM. Amazing how different the wind flow looks. Barely any wind blazing into the Great Basin and notice how the Bay Area is more on the edge of the North Pacific High’s surface NW winds.