Blog.WeatherFlow.com > California & Baja > The North Pacific High pushes a ridge inland that evolves into high pressure in the Great Basin

In response N to NE winds develop in The Gorge, Southern California, Bay Area and Baja.

Yep, its fall and the winds begin a ramp down in The Gorge, Southern California, Bay Area. But in Baja we are  seeing the first hints of the coming winter time El Norte winds. And today we are seeing weak NE winds at the surface and aloft at all the premiere west coast windsurfing and kiting venues.

But in the fall the North Pacific High begins to have issues with the passing of the seasons.

1. It begins to shrink and its average location is further away from the coast.

2. Passing storm systems to the north often cause it to elongate into far Northern California or the Pacific Northwest and in some cases part of the North Pacific High pinches off and enlarges in the Great Basin .

Top Image: It is that latter issue that the west coast will  experience the next few days. And this occurrence a dramatic impact on west coast winds. Looking at the animation of today’s winds note the faint NE streamlines of wind over the Bay Area and Southern California in the AM.

2nd image:  Looking at the second image of the isobars for today notice the North Pacific High. Also note  how the NPH’s isobars elongate into the Pacific Northwest. 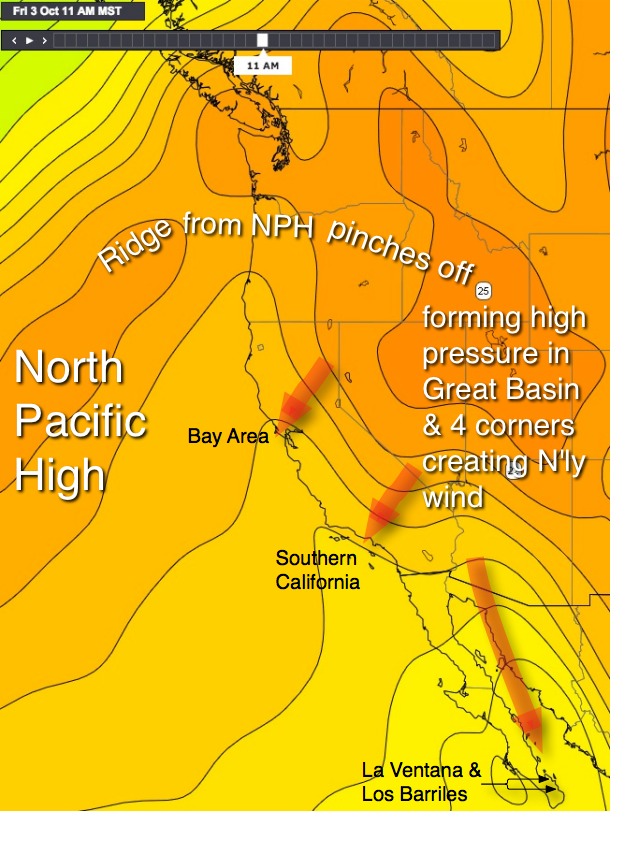 This lobe of high pressure is known as a surface ridge and it creates N to NE winds on the west coast.  Often in the fall this ridge actually pinches off and forms a major high pressure zone in the Great Basin  and 4 corners region.

This creates even stronger NE winds in California and Northern California may experience Diablo winds while Southern California has Santa Ana winds. Often this wind does not reach the surface since it is warm unstable air that lifts when it hits topography but it does move warm air towards the coast as NE winds descend and compress over the mountains. And this will will  accelerate in canyons

All this warm air causes the thermal low in the Central Valley to expand over the Bay Area hence there is a weak pressure gradient and faint winds. In Southern California the thermal low over the inland mountains does the same thing making the wind unreliable if it blankets the whole coast.

Going back to the top video note that when the NPH pushes a ridge into the Pacific Northwest the NW winds pull away from the coast and are replaced by NE winds that mix out the marine layer clouds and keep the North Pacific High’s surface NW winds far from shore.

Baja and high pressure: The one region that benefits wind wise from this high pressure. Looking at the video animation notice how mild El Norte winds are flowing down the Sea of Cortez to Baja’s East Cape. These winds are modest today but they are a harbinger of the powerful El Norte winds of winter that develop when high pressure often forms in the 4 corners region. In the bottom image notice the isobars stacked down the Sea of Cortez creating a pressure gradient.