Tiny low pressure blocks North Pacific High in the AM. 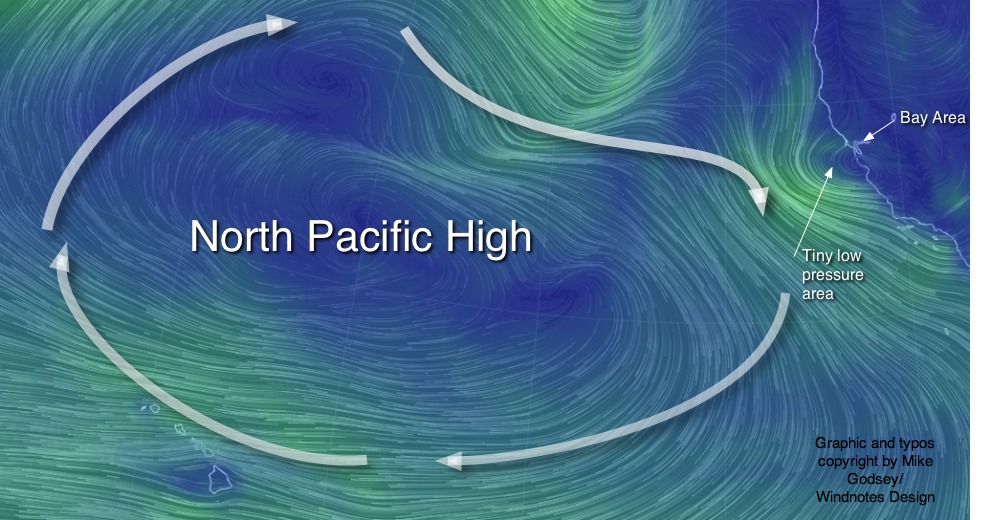 As you can see in the first graphic there is a huge North Pacific High out in the pacific. So predawn Maui is already seeing building Trade Winds and the crew at San Carlos is getting ready for another epic day.

But things are tricky for the Bay Area. Look carefully at the first image and you can see a tiny spiral SW of the Bay Area.

Now drop down to the video and notice the North Pacific High’s surface NW winds just west of the ocean buoys. But inside of the ocean buoys notice the counter-clockwise winds . These are being created by a tiny low pressure system left over from the recent storm. This is creating weak NE winds inside the Bay this morning. But more importantly this low pressure is blocking the strong NW winds.

Bay Area only sees weak winds. However the higher resolution MM5 and especially the WRAMS have the low pressure departing and upper teens to low 20’s wind invading parts of the bay.

Generally higher resolution models are more accurate. But they have a flaw. By focusing the computer power on a smaller area they may lose track of events just beyond their region. So in this case them may not be factoring in the tiny low pressure system.

If I were forecasting today I would take the same gamble Mark is taking. So let’s watch the ocean buoys in the next few hours and see if they turn from NE to NW as forecast. And if they do plan on hitting the water.