In the blog just prior, we are talking about surface pressures and the effects on winds as we experience them in the short term. This post is dealing with more long term patterns and how they may relate to our everyday forecast. Sometimes the difference takes place high above, in the upper atmosphere……

This last winter on the West Coast we experienced a much drier and warmer season, while over on the East Coast, just the opposite occurred. The atmospheric explanation for this was a persistent upper level ridge, camped out the entire region, driving wetter and colder weather up and over the Northwest. These ridges are like mountains in the atmosphere, composed of high pressure domes, up into the steering winds that drive weather here on Earth. The upper level section is generally at about 300-500 mb, or 18,000 to 30,000 ft. up. The flows here are like a river, that guides smaller disturbances and storm cells to their next destination. The ridging drove the cold snowy weather far away from the West Coast many times….

Lately we have been experiencing just the opposite. An upper level trough pattern has been in charge, grabbing low pressure systems and directing them over the Northwest and California, one after another. The trough originates near the Gulf of Alaska, and this cool river of air makes a great breeding ground for thunderstorms, as warm air on the surface, rises in the spring sunshine, encounters the cold air above, and condenses out the water into clouds-sometimes very large and powerful ones. 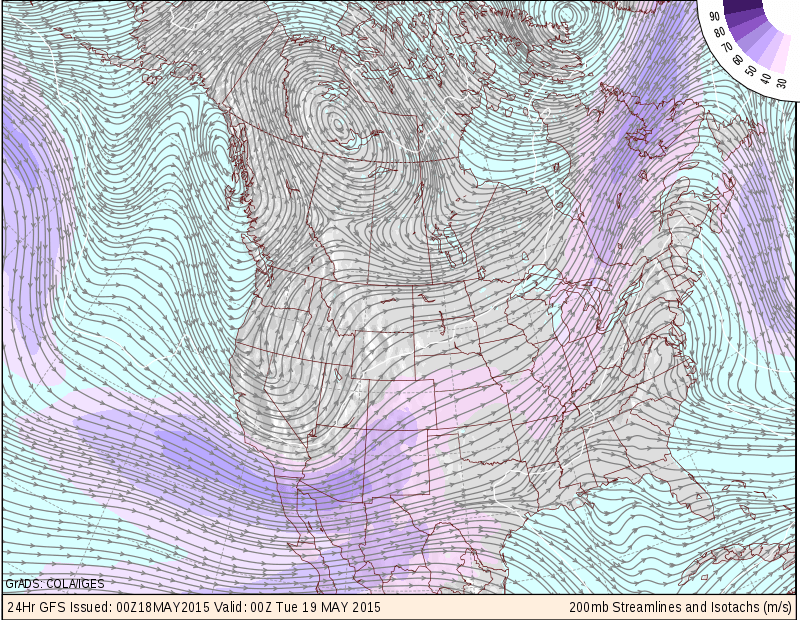 Another notable is the way air rotates around a low pressure, counterclockwise.If you look at the right edge of that circle in Nevada, you will see that this rotation would drive up southeast and up into eastern Oregon….

This opposite flow pattern is often referred to as wrap around flow, for the way it navigates the edge of the low pressure center and returns upslope into a region like Eastern WA or OR.

Hence the recent pattern of afternoon thunderstorms that build as clouds move in from the south……..

Makes for the weak easterly winds you see here at Arlington, while the windy spot, Jones Beach, is feeling the push from surface high pressure offshore. It has also kept stronger winds from filling in over the NearEast in the afternoons……

The thunderstorms gather most readily around the mountains where air encounters most lift.